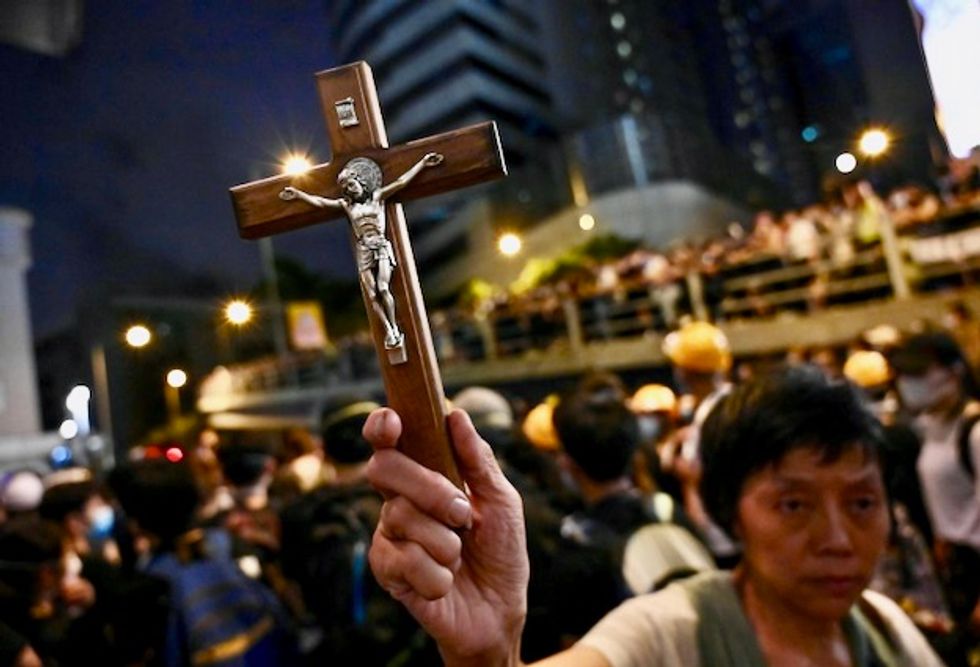 Held aloft above a sea of protesters marching through the heart of Hong Kong, the hand-written cardboard sign made an unusual demand: "Stop using baton or we sing Hallelujah to the Lord".

The humorous threat, which was aimed at police and quickly went viral, referenced a hymn and notorious earworm that has become the anthem for recent massive demonstrations rocking the semi-autonomous city.

But it also illustrated the prominent role Christians are playing in the movement against a proposed bill to allow extraditions to mainland China.

Most churches in Hong Kong tend to shy away from political involvement.

But the now-postponed extradition bill struck a nerve with local ministries, many of which support underground churches in China.

"Everyone is worried about crossing the red line," Elton Lo, one of a group of pastors who initiated a week of fasting and prayers in support of the movement, told AFP.

AFP / HECTOR RETAMAL The now-postponed extradition bill struck a nerve with local ministries, many of which support underground churches in China

Unlike in mainland China -- where faiths are strictly monitored by the state -- Hong Kong still has religious freedom.

From the influential colonial-era Catholic and Anglican communities to evangelical mega churches, Jehovah's Witnesses handing out leaflets and Hare Krishnas parading through parks, the city is a riot of faiths.

But how long that remains the case is a source of intense nervousness.

Under the handover deal signed with the British, China agreed to maintain Hong Kong's unique freedoms and judicial system until 2047.

Yet many fear Beijing has already started reneging on that deal in recent years.

The plan to allow extraditions only heightened those concerns within faith communities, who feared the long arm of China's opaque and politicised law might start crossing the border.

This was especially true for Hong Kongers helping underground faith groups on the mainland where a recent clampdown has seen churches shuttered, crosses removed and Bible sales restricted.

"The Chinese Government could say that these ministries are illegal activities sponsored by the churches of Hong Kong. (Church leaders) could be arrested," said Chan Shun-hing, an expert on religion at Hong Kong Baptist University.

Father Stephen Chan has hosted an outdoor mass near the city's parliament each Sunday since the 2014 pro-democracy Umbrella Movement protests failed to win any concessions from Beijing.

"They (Catholics) know that if Hong Kong becomes Communist China, then there will be no more (religious freedom)," he told AFP after a service last weekend.

Lo and Chan both said more church leaders and congregations were now participating in the anti-government demonstrations compared with 2014.

Even though many of the Umbrella Movement's older leaders are devout Christians, it never had an openly religious feel.

"After the Umbrella Movement, within many churches there have been discussions about what the relationship between the church and society should be, especially among young people," said Lo.

Throughout this month's protests, religious leaders organised prayer meetings and hymn sessions -- often aimed at defusing tensions between protesters and police -- as well as opening their doors to let demonstrators rest and pray.

Christians make up some 11 percent of the population but they remain influential, especially among the elite -- pro-Beijing leader Carrie Lam is herself a devout Catholic.

But Lam has found even her natural religious allies criticise her extradition plan.

Earlier this month the pastor of a usually pro-government mega-church said he could not support the bill, while the Catholic diocese and an umbrella body of 21 churches urged Lam to withdraw the bill altogether.

Cardinal Zen, an octogenarian former Bishop of Hong Kong and staunch critic of the Vatican's recent rapprochement with Beijing, has been a regular at the protests.

"There is no choice but to protest," he told AFP.

"We don’t talk much about 2047. What will happen then depends also on what we try to do today. I hope some radical change of situation will happen in China before 2047."

One pastor -- who works with youths at one of the city's most conservative churches and only gave his surname, Tam, said he did not agree with the more radical tactics used by protesters.

But he attended the protests with about a dozen young church members on June 12, and was swept up in crowds escaping tear gas and rubber bullets fired by police.

He said his church -- which counts police officers and government officials among its congregation -- held prayers calling for Lam to hold the bill, warning that attempting to push it through the legislative process would be "very dangerous."

"It would totally tear society apart and many things would cease to function."

He expected freedom of religion to worsen as 2047 approaches but he remained hopeful.

"I can only expect it to get worse, but no matter how bad it gets, as long as we can speak out we should speak."