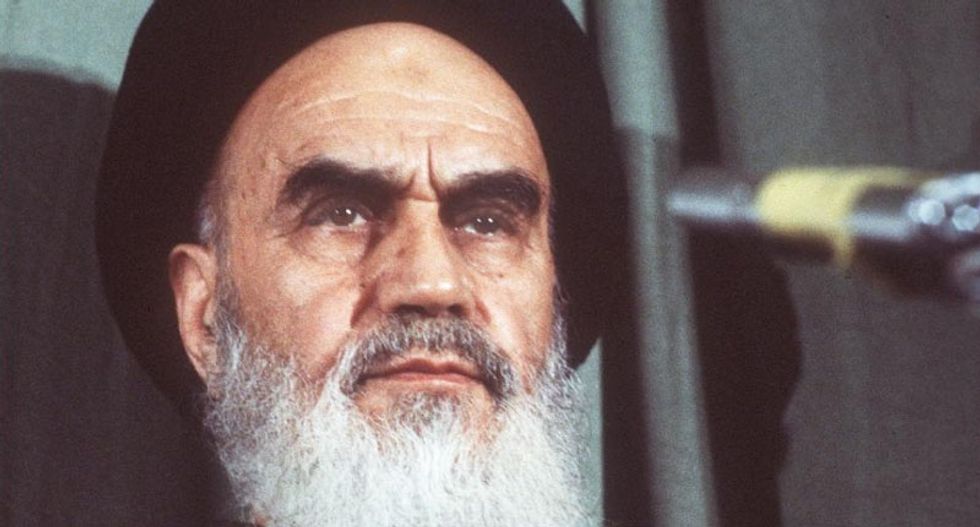 Thirty years ago millions of mourners crowded the streets of Tehran for the funeral of Ayatollah Ruhollah Khomeini, and today the founder of the Islamic republic remains a guiding figure in Iran.

The image of the black-turbaned cleric who brought down the monarchy in 1979 stares out at people across the country, from hotel lobbies and the front of stadiums to hospitals and banknotes.

In life Khomeini was recognised by his followers as the "Imam", leader of the Shiite community, and decades after his death he remains enshrined in the Iranian constitution as "the great source of imitation".

"His key legacy is the strong notion of independence, sovereignty and resilience against foreign hegemony and imperialism that still continues to exist among Iranians," Mohammad Marandi, head of the American studies department at Tehran University, told AFP.

Born in 1902, Khomeini died on 3 June 1989 following a battle with cancer just over 10 years after he led the Islamic revolution that swept Iran's last shah Mohammad Reza Pahlavi, a key US ally, from power.

His rule saw a decade of tensions with the "Great Satan" Washington and the brutal 1980-88 war unleashed by Saddam Hussein's Iraq that ended a year before he passed.

Khomeini's teaching was centred on the defence of Islam and the underprivileged and a fierce rejection of Western modernity and perceived imperialism.

He developed the doctrine of Velayat-e faqih (the guardianship of the jurist) stating that power should be in the hands of a supreme spiritual leader chosen for his piety to direct both the state and believers.

The theocratic principle forms the cornerstone of the Iranian system that combines elected institutions with religious control aimed at giving the Islamic republic both divine and popular legitimacy.

"Velayat-e Faqih is not a concept that he created. It existed in Shiite jurisprudence over many centuries," said Marandi.

"What was new was that he actually was able to overthrow a Western-backed dictatorship in the country and establish an Islamic republic" that allowed Iran to put the "theory into practice".

The overthrow of the monarchy was achieved thanks to a disparate array of forces that mixed Shiite clerics, with secular nationalists and Marxists.

But after the regime fell Khomeini showed a ruthless determination to shut out those erstwhile allies as he staved off all challenges from them and supporters of the shah.

In an August 1979 speech the ayatollah exhorted his followers to show no pity for the "enemies" of the revolution, lamenting diplays of leniency.

"If we had acted as revolutionaries, broken the pens of all the press and closed down all corrupt magazines and corrupt media, prosecuted their corrupt bosses, and banned the corrupt political parties, and set up hanging scaffolds in main squares... we would not be facing these struggles," he said.

Former French ambassador to Tehran Francois Nicoullaud said Khomeini combined both "the pragmatism that it took to get power and to keep it, and the merciless behaviour towards the enemies of the Islamic revolution".

"He was for the Velayat-e faqih...and he accepted having elected institutions," he said, ticking off examples of the leader's flexibility.

"He wanted to go all the way against Saddam Hussein and finished by accepting a peace that had no victor and no vanquished."

While Khomeini has become a major historic figure, he continues to play a central role in discourse in Iran decades after his death.

"The ayatollah's charisma is kept alive in the political debate," said Clement Therme, an Iran specialist at the International Institute of Strategic Studies (IISS).

"All the political elites of the Islamic republic claim to be his heirs and his words are used in the debate to score points off opponents."

The splits that run through the country's rulers are fed by "different interpretations" of Khomeini's thoughts, Therme said.

On the one side are reformists "who insist on the popular elected legitimacy of institutions" and on the other are the conservatives focused on "divine legitimacy", he said.

While the disputes may rage over Khomeini's political legacy there is little doubt that he transformed Iran and remains for many in the country a major authority.

Khomeini "literally changed Iranian society, (from) a country that was subservient to the needs and interests of foreign entities to prioritising the needs, the dignity, beliefs, culture and the interests of the indigenous population," said Marandi from Tehran University.