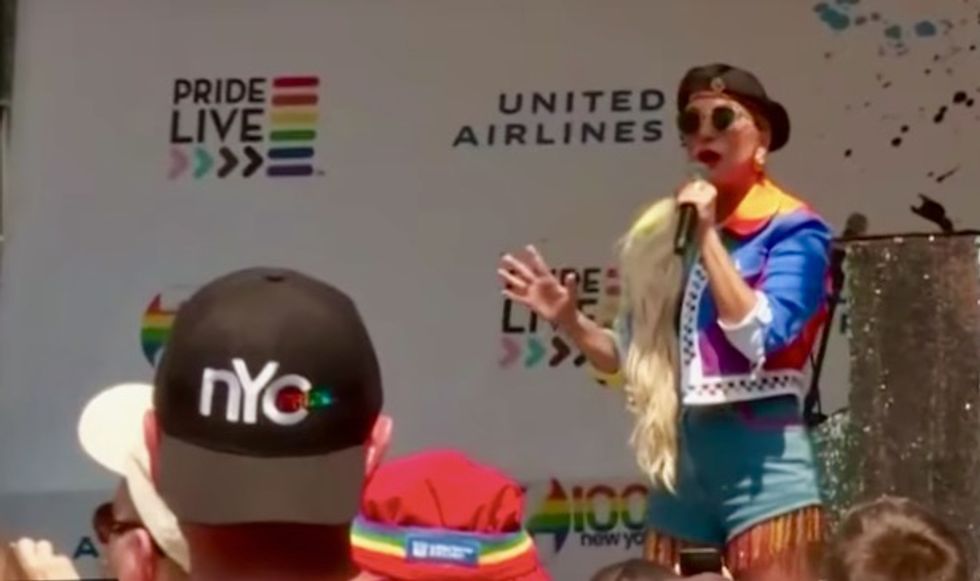 Lady Gaga delighted crowds Friday by making a surprise appearance at a celebration commemorating the 50th anniversary of the Stonewall riots, a gay rights watershed moment.

"I really, really hope you celebrate every inch of who you are today," said the pop superstar, long beloved by the LGBTQ community, at the bash in Manhattan's Greenwich Village.

"You were born this way and you are superstars," she shouted to applause, referencing the title of her 2011 hit "Born This Way" that became a gay rights anthem.

The June 1969 riots, sparked by repeated police raids on the Stonewall Inn -- a well-known gay bar in New York's Greenwich Village -- proved to be a turning point in the LGBTQ community's struggle for civil rights.

"I look at the older generation and how you have fought to create a safe, more tolerant space for our youth," said Gaga, clad in thigh-high glittering rainbow platform boots, denim booty shorts with rainbow fringe and a rainbow jacket over a black bandeau bra.

"It used to be unheard of to even come out of the closet," the 33-year-old continued, saying that today many children "are aware of their ability to discover and name their own sexual identities; their own gender identities. They are finding themselves and they are not as afraid."

"You did that! You created that space," she said.

Stonewall Day comes before a weekend featuring concerts by Madonna and Grace Jones, winding up with a giant World Pride Parade on Fifth Avenue. It will be the sixth edition of World Pride, which began in Rome in 2000 and brought together droves of people from across the world.

New York's Gay Pride is regularly one of the largest such events globally, but for this year's milestone anniversary, authorities expect an additional two to three million visitors to attend.

Amid Friday's festive atmosphere -- featuring rainbow flags, drag queens and performances from stars including Alicia Keys, along with appearances by Donatella Versace, Chelsea Clinton and Whoopi Goldberg -- Gaga pointed to challenges that persist.

"Attacks on the trans community are on an increasing rise each day," she said. "I will not tolerate this -- I know neither will you."

GETTY IMAGES NORTH AMERICA/AFP / SPENCER PLATT A crowd gathers to listen to speakers and performers at the Stonewall Day event marking the 50th anniversary of riots at the Stonewall Inn gay bar, which many people consider the birth of the modern gay rights movement in America
Report typos and corrections to: corrections@rawstory.com.