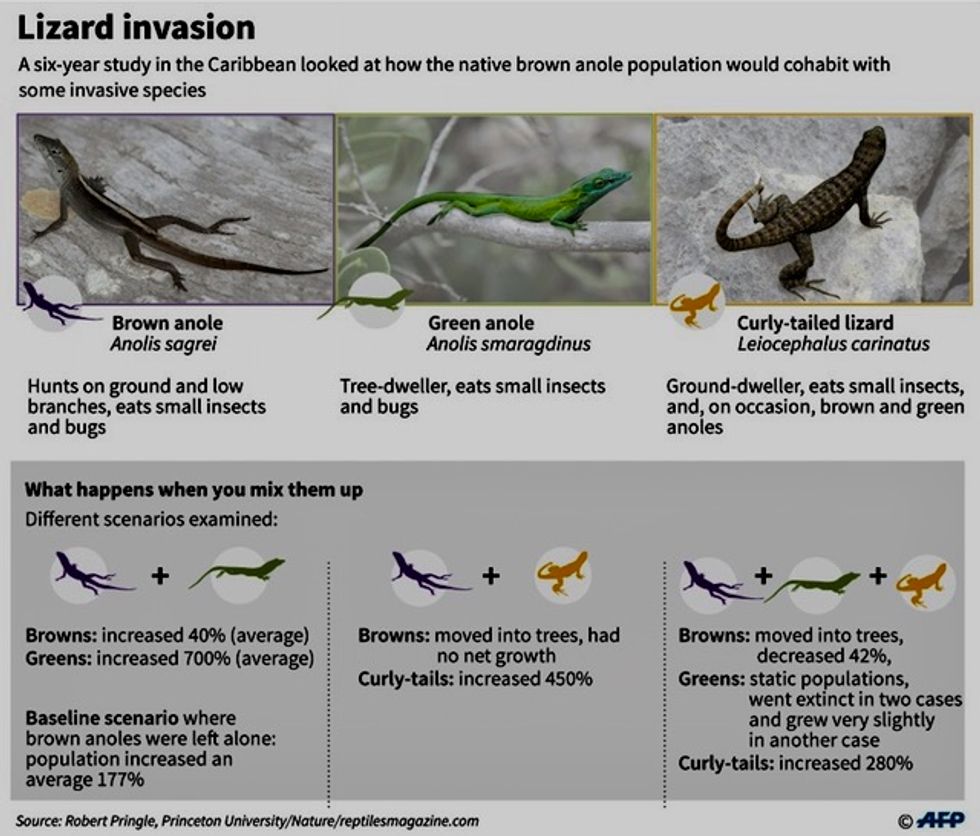 Invasive species can dramatically reshape environments and cause extinction, even when they don't prey on their newfound neighbours, according to new research that highlights the dangers of altering habitats.

The six-year study of lizards on a string of remote islands found that the arrival of a predator can prompt species that previously co-existed peacefully to cluster in a shared refuge, creating competition that can be devastating.

It challenges a long-standing theory that predators feeding on animals lower down the food chain prevent any one prey species from dominating a habitat, and so promote ecological diversity.

"Our results suggest that we need to update conventional wisdom in a few ways," said lead author Robert Pringle, associate professor of ecology and evolutionary biology at Princeton University.

Understanding how species co-exist is one of the biggest challenges in biology, not least because it is hard to find or create control environments for experimentation.

But Pringle and his team found a solution in the form of a string of 16 islands in the Caribbean, home to an unassuming lizard known as the brown anole, which largely hunts on the ground and in low branches.

The islands provided the researchers with the perfect blank canvas to observe how the native brown anole population would react when different invasive species were introduced.

The first test was to see if the ground-hunting brown and tree-dwelling green anoles could co-exist successfully.

The study found that was possible: the green anoles rapidly multiplied, and while the brown anole population didn't grow as much as on the control islands, it still expanded.

The introduction of the curly-tailed predator lizard -- a ground-dweller that can eat both the unfortunate brown anole and its prey -- saw the native population change behaviour.

Brown anoles took to the trees, leaving behind much of their usual hunting grounds to stay beyond the reach of the new arrivals. This meant the brown anole population did not grow, but the native lizard at least remained static.

But the most interesting results of the research, published Thursday in the journal Nature, came from the final scenario, where all three lizards were forced to share the same habitat.

Under the existing theory, the curly-tailed lizard should have prevented either of the anoles from dominating and detente would have prevailed.

But in fact, brown anoles moved up into the trees to escape the predators and found themselves in competition with the green anoles, with dire results.

The brown anole population shrank more than 40 percent, and on two of the islands the green anoles went extinct. On a third their population was static and only on one did they grow moderately.

The population collapses came despite the fact that the curly-tailed lizards were rarely eating the anoles -- they were effectively driving themselves into extinction.

"The 'landscape of fear' created by the predator forces prey species into intense competition," Pringle said.

"Introducing a predatory species can cause the extinction of prey species that never even encounter the predator."

The research leaves some questions unanswered, including why the green anoles suffered more than the brown anoles in their refuge from the curly tailed predators.

And the islands have more to offer: having documented how brown anoles altered their habitat and diet to escape predators, the researchers now want to examine what evolutionary shifts these changes may have caused in the species.