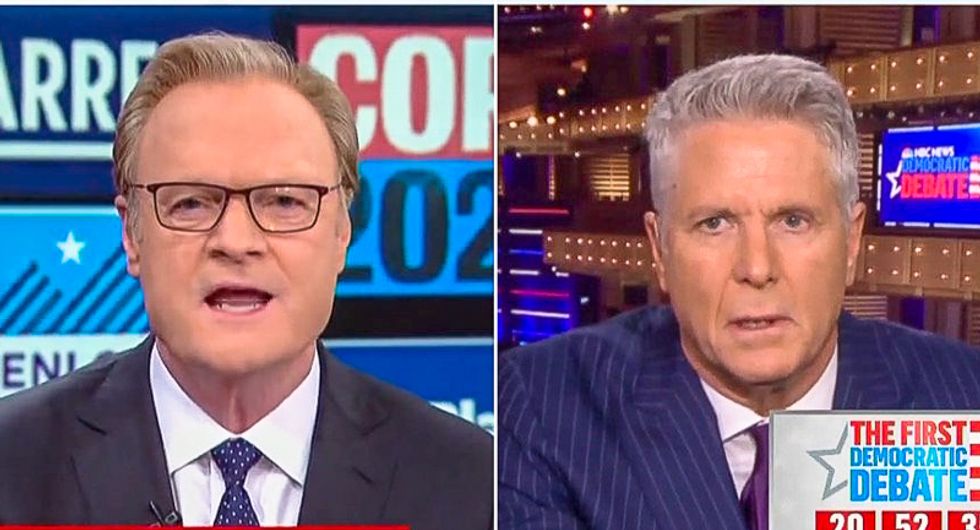 Lawrence O'Donnell and Donny Deutsch had quite the exchange in the post-debate conversation on MSNBC Wednesday.

"I do not believe Elizabeth Warren, on stage with Donald Trump, beats him," he told the MSNBC panel. "And I think if we're honest with ourselves and we look hard at ourselves, I think a lot of people agree with me. It's — and I also think when you can label somebody a socialist, 57 percent of this country thinks that word is un-American. I'm not saying it's fair. When he can blanket Elizabeth Warren as a socialist, and he's on stage with her, the Democrats lose."

He went on to say that he likes her as a person but still doesn't believe she has what it takes.

"Donny, you're in a safe space can I follow up on that, Donny, who could beat Trump?" asked co-host Nicolle Wallace.

Deutsch wants the "Joe Biden paired with the right candidate."

"Let's just identify this for what it is, pure guesswork a year and a half away and so it has, and, Donny, I say this respectfully, zero value —" O'Donnell said before Deutsch cut in.

"Don't say it has zero value!" Deutsch clapped back.

"It does. It's a guess. It's a wild guess, Donny," O'Donnell answered.

"There's no science in it; there's nothing in it. And you can put any time you want in the wild guess you just made and it doesn't make it true," O'Donnell replied.

While Trump can be expected to call Warren a socialist, Republicans have been slinging the word at every Democrat for the past 50 years since FDR created Social Security. With a new generation of young people hearing about socialist policies and seeing Trump bash them, more interest has been sparked by the Republican attacks.

As for the idea that Warren couldn't win, the same kind of electability argument was made about former Sen. Barack Obama during the 2008 presidential campaign.