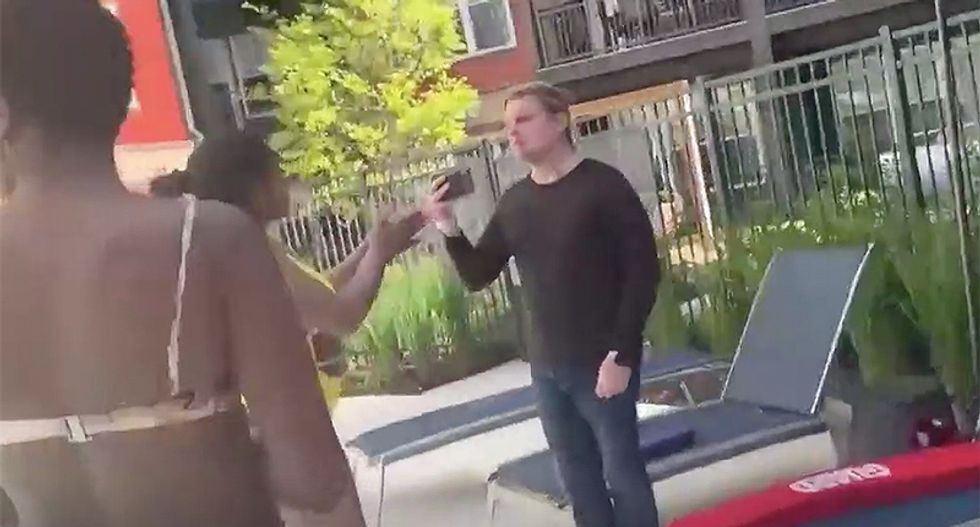 A Maryland man who called police on two groups of Black women at an apartment complex says that his actions weren't motivated by race, rather it was his autism.

According to WUSA, the man now known as "Poolside Nick," approached the women to complain about using glass bottles, which is against the pool rules at their apartment complex.

Videos were posted by Felecia Soso showing the man telling the women "glassware is not allowed at the pool."

This man comes out of no where and I only started recording because I thought it was gonna be hilarious.. this man… https://t.co/BuqpMYxtMI
— Lil Fort Wash Posh (@Lil Fort Wash Posh) 1561245527.0

The woman in the video said that she would get rid of the glass. She then asked, "What else do I need to do for you to be comfortable?"

The man, who has since been identified as Nick Starr-Street responded in the video, "I'm going to report you to the leasing office."

Someone from the office then came to talk to them, then the police showed up.

After the Hyattsville Police Department showed up, they decided to leave the pool.

The following day, another incident happened, where Gaëlle Claude, another woman of color, was followed by Starr-Street, while he called 911 a second time.

She tweeted that the man "literally stalked us.... for damn near a mile," after he said they were drinking at the pool and taking photos.

During an interview with WUSA, Starr-Street said that the incident had nothing to do with race.

He noted that he called security on a third group of women on Monday, but they were white. The police, however, were not called in that case, simply apartment security. Presumably, police told Starr-Street that seeing someone with glass at the pool is not worthy of an emergency call to 911.

"I'm autistic. I just see right and wrong," Starr-Street explained to WUSA. "I don't see race. I don't see gender. I don’t see color. I don't see any of that."

The network said that the charity Ambitious About Autism does say that people on the spectrum can become single-minded.

"It's one thing to have a 'special interest,' but it’s another to have a serious obsession," the website claimed.

The network tracked down Starr-Street on Twitter, showing another incident where he made insensitive comments about a popular drag queen just days after the Pulse Nightclub shooting.

Since the report went viral, someone in the building scratched RACIST on his door and he said he no longer feels safe.

Read the full report at WUSA.