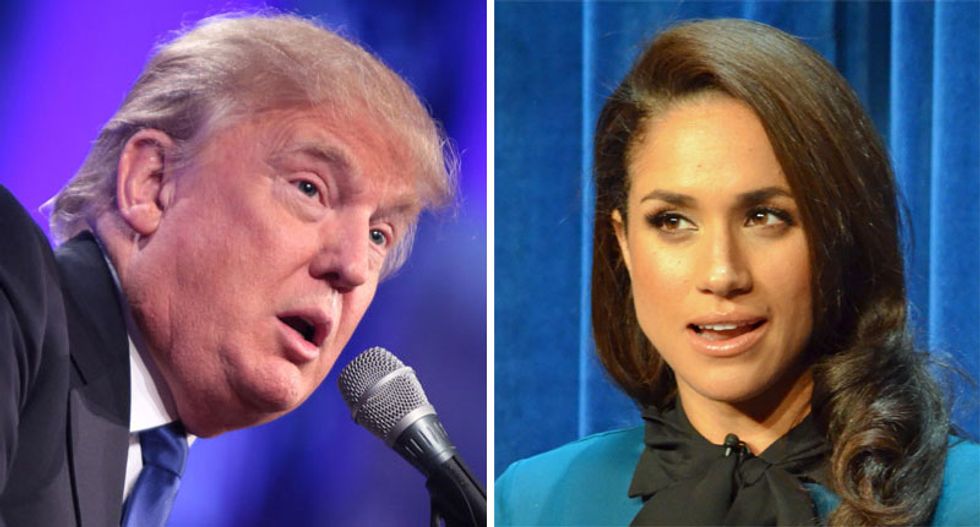 Composite image of Donald Trump, by Gage Skidmore and Meghan Markle by Genevieve

MSNBC host Nicolle Wallace couldn't help but agree with Meghan, the Duchess of Sussex, when it comes to the long history of misogyny from President Donald Trump.

The president landed in the United Kingdom Monday after a series of attacks on British leaders. When it comes to the Duchess, however, Trump responded, "I didn't know she was nasty." He then tried to say that he never said that, despite the interview being recorded and the record of the statement being released. It's unclear if the president didn't remember what he said or he's simply lying.

Either way, Wallace, agreed that the slam on the president was well-founded.

"Donald Trump is more unpopular where he sits tonight behind you than he is even in this country," said Wallace. "And it's hard to imagine how hard they are working there to sort of stick their fingers in all the leaks there in what looks lovely. But the truth is you don't have to scratch very deep to get to the deep, deep animosity for this American president."

She noted that insulting the American Princess, Meghan, is close to the bottom and that's how Trump began his journey. She went on to call Trump's behavior, "uncivilized brutishness."

"Meghan Markle suggested there was an air misogyny to Trump," Wallace said. "Let's defend the woman called 'nasty' by America's president for a minute. But what Jonathan Lemire laid out is an obliteration of not just norms but everything that happens in terms of American diplomacy. He doesn't leave his political attacks, snark and ugly bombast at home. He takes it with him on his little devices. But he also uses it not just to put his finger on the scale but to muck around in another country's messy, painful politics, talk about this moment."