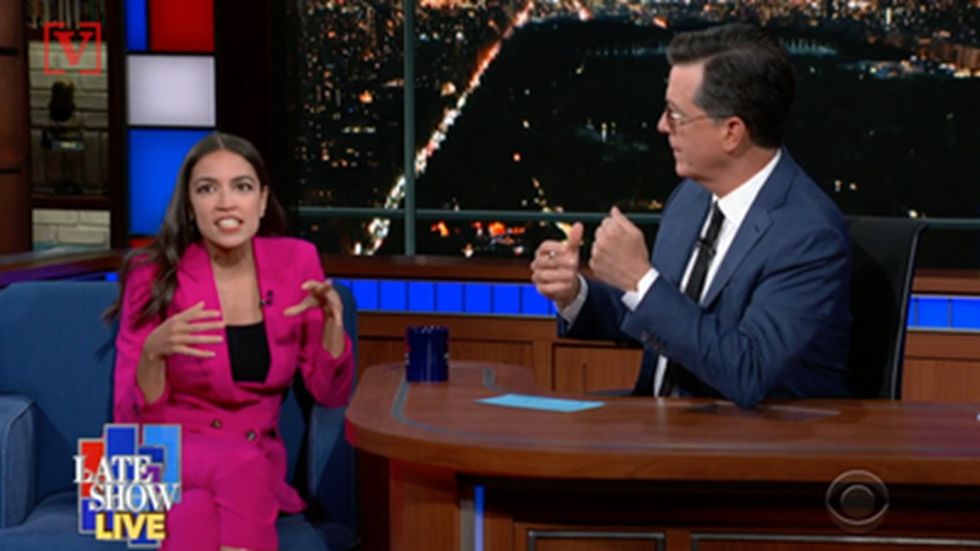 During a Wednesday night appearance on "The Late Show with Stephen Colbert," Rep. Alexandria Ocasio-Cortez, D-N.Y., poked fun at two of the Democrats during the first 2020 debate who broke into Spanish while answering questions — and shared her observations about the winners and losers of the night.

"I loved it, because I represent the Bronx. There was a lot of Spanglish in the building," Ocasio-Cortez joked when discussing how Sen. Cory Booker of New Jersey and former Rep. Beto O'Rourke of Texas answered some of their questions in Spanish. "I thought it was humorous sometimes, at times. Especially because sometimes the content of the question, I thought people were just going to start saying — "

At that point, Ocasio-Cortez said the Spanish sentence that translates to: "I will not give you an answer to your question." She then added, "But it was good. I thought it was a good gesture to the fact that we are a diverse country — so that's good."

Of the sheer number of candidates on the debate stage — there will be ten in total on each of the two nights — Ocasio-Cortez said, "I think — sometimes with a debate stage this big, it can kind of seem like a high school classroom. And so there are some folks that didn't seem like they read the book, and then they got called on."

In terms of winners, the New York congresswoman identified the progressive senator from Massachusetts and former President Barack Obama's secretary of Housing and Urban Development.

"I think Elizabeth Warren gets asked back . . . I think she knocked it out of the park," Ocasio-Cortez told Colbert. "I think Julian Castro did a phenomenal job tonight . . . I think both of them were great."

By contrast, she answered a question about Reps. John Delaney of Maryland and Tim Ryan of Ohio with facial expressions and mannerisms, which indicated she was less than impressed with their performances.

Instead, she focused on marginalized groups, which she felt received proper attention during the debate.

That being said, she criticized the moderators for not sufficiently focusing on man-made climate change.

"And I know there's a lot of folks — a lot of young people — that have been mobilizing for an entire climate debate in the Democratic caucus," she continued. "I think it's a good idea, because when it comes to climate change, climate change is an infrastructure issue. It's a jobs issue. It's an energy issue. It's a foreign policy issue. And we can't just talk about the Copacabana."

Ocastio-Cortez also was restrained in her criticisms of former Vice President Joe Biden, the current frontrunner for the 2020 nomination, reiterating her thesis when she told "Vogue" earlier this week that Biden may not be "a pragmatic choice."

During that interview she added, "That’s my frustration with politics today — that they’re willing to give up every single person in America just for that dude in a diner . . . Just so that you can get this very specific slice of Trump voters?"

You can watch the full segment below: