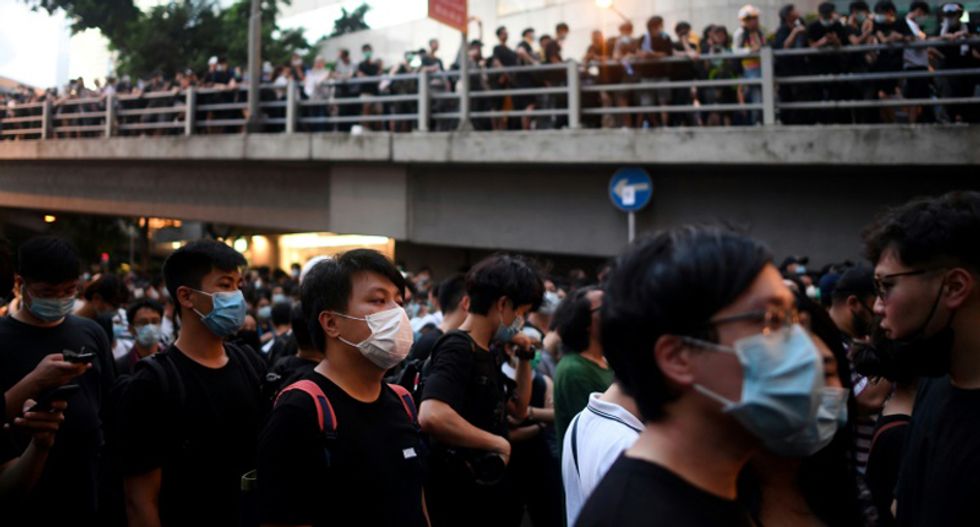 Thousands of protesters blockaded Hong Kong's police headquarters Friday evening, demanding the resignation of the city's pro-Beijing leader and the release of demonstrators arrested during the territory's worst political crisis in decades.

The latest protest comes after the government refused to meet the demands of demonstrators who have marched in their millions to oppose a bill that would allow extraditions to the Chinese mainland.

Opposition groups, after putting on the biggest political rallies in Hong Kong's history, have called for the complete withdrawal of the extradition legislation and for city leader Carrie Lam to step down.

But the movement has also morphed into a wider expression of public anger at Lam and party leaders in Beijing after years of sliding political freedoms.

Throughout Friday the predominantly young, leaderless protesters used spontaneity and movement to up pressure on authorities.

But the focus for the day and into the evening was the police headquarters where thousands gathered, many chanting "release the righteous" and "shame on police thugs" -- references to those detained during violence last week between demonstrators and the police.

Anger towards the city's police has exploded since officers on June 12 used rubber bullets and tear gas to clear crowds of demonstrators from the streets.

Opposition groups have demanded an investigation into allegations of police brutality and the release of those detained during the clashes, in addition to Lam's ouster and a cancellation of the extradition bill.

Rights group Amnesty International said Friday it had verified multiple instances of police violence that breached international laws while the Hong Kong Bar Association added its voice to calls for an investigation into police tactics.

Crowds outside the police station grew on Friday evening as workers joined the largely student-led protest where demonstrators used metal barricades to fortify their positions and used unfurled umbrellas and masking tape to obscure CCTV cameras.

Police held back from any response and with the exception of a few thrown eggs, the demonstration remained peaceful.

Earlier in the day smaller groups of protesters briefly blocked entrances to the city's nearby immigration and revenue departments.

"We need to flow like water", to be able to retreat and regroup and adapt, said protester Chris, referencing a famous quote from martial arts superstar and Hong Kong legend Bruce Lee.

Another protester likened the crowds to artificial intelligence. "They learn from themselves, nobody really teaches them, they just adapt to different situations," said Bernard, 21.

The call for Friday's demonstration was made by the city's student unions, as well as informal organisers over social media and messaging apps like Telegram.

Lam has so far defied calls to step down, and while she has apologised and suspended the bill indefinitely, it has failed to quell anger. Pro-democracy demonstrators have vowed to hold another mass rally on 1 July.

Although Hong Kong was returned from British to Chinese rule in 1997, it is still administered separately under an arrangement known as "One country, two systems".

The city enjoys freedoms unseen on the mainland but many residents have been alarmed in recent years by what they feel is a tighter grip by Beijing.

Opponents of the extradition bill fear it will ensnare the people of Hong Kong in mainland China's opaque and politicised justice system, and also give Beijing a tool to target critics based in the semi-autonomous territory.

The Chinese government had supported the extradition proposal, and accused protest organisers of colluding with Western governments.

But Beijing said after the bill's suspension that it respected and understood the decision.

Separately on Friday, former Philippine foreign minister Albert del Rosario -- a critic of China's claims in the disputed South China Sea -- was denied entry into Hong Kong and deported, his lawyer said, adding that he was not given a reason for the expulsion.

Hong Kong immigration authorities did not immediately respond to AFP's request for comment.

Gov. Ron DeSantis doesn't want anything to do with the expanding problems of Florida Republicans like Rep. Matt Gaetz (R-FL) and former tax collector Joel Greenberg.

According to Florida Politics, DeSantis dodged questions about Gaetz on Monday when asked. The two men seemed attached at the hip during the 2018 election, appearing at several events together. There don't appear to be any photos of the two men anywhere on DeSantis' campaign page, but there certainly are on Gaetz's page.

Director Antoine Fuqua was planning to film his movie "Emancipation" — which stars Will Smith and is about a runaway slave who fled Louisiana during the Civil War — in Georgia. But in light of the GOP-sponsored voter suppression law that Republican Georgia Gov. Brian Kemp recently signed into law, Fuqua and Smith have decided to move the production out of Georgia and film "Emancipation" somewhere else.

Georgia's voter suppression law makes voting more difficult in a variety of ways, from reducing absentee voting to limiting access to ballot drop boxes to making it a crime to give food or water to someone waiting in line to vote.