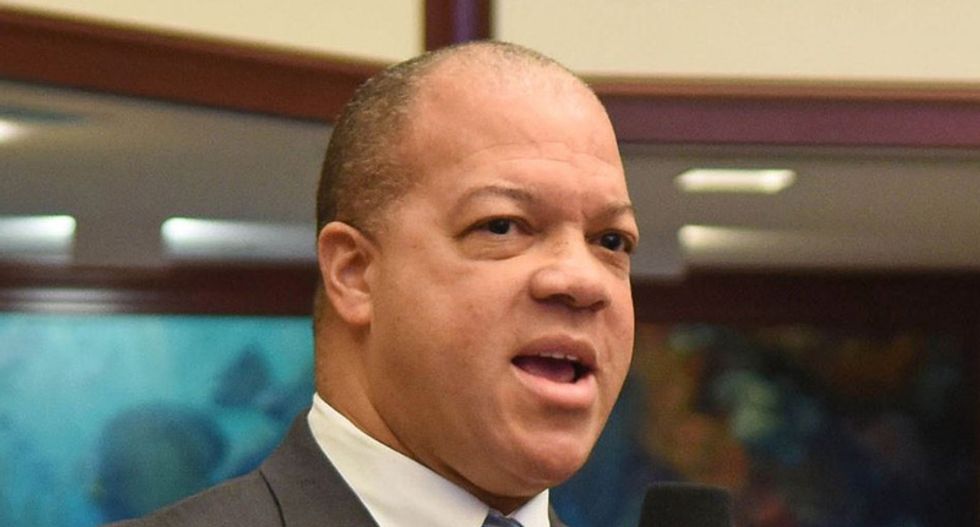 Tea Party Republican State Rep. Mike Hill is refusing to apologize – and he's now on the attack, claiming he's the victim of a "social media lynching." Hill was caught on tape laughing after a constituent asked if it would be possible to pass a law to execute gay people, because the Bible calls for it.

"Absurd to ask me to apologize for a statement that I did not make and that no one took seriously. This is a social media lynching!" Rep. Hill insisted in a tweet Saturday.

And while Rep. Hill did not make the initial offensive remarks, he did laugh, and did not tell attendees at the Women for Responsible Legislation meeting – held at Pensacola's taxpayer-funded city hall no less – that even joking about executing someone is unacceptable.

Hill did chime in at the time, too, noting that killing gay people is called for "in the Old Testament."

Rep. Hill also lashed out at Democratic State Rep. Carlos Smith over the weekend, calling him a "liar," while falsely insisting he "did not laugh at or discuss legislation to execute anyone."

But as the Miami New Times reports, one reason Hill is refusing to apologize is because his base eats this stuff up.

"It simply emboldens my base," he told talk radio host Burnie Thompson. "Just like when the fake news attacks Trump and his followers come out, I got all kinds of responses today, Burnie. It's encouraging and strengthening, people saying, 'Mike, don't back down, don't apologize, you didn't do anything wrong. You stand strong with your convictions, that's why we like you.'"