Saudi women use wedding contracts to assert right to drive 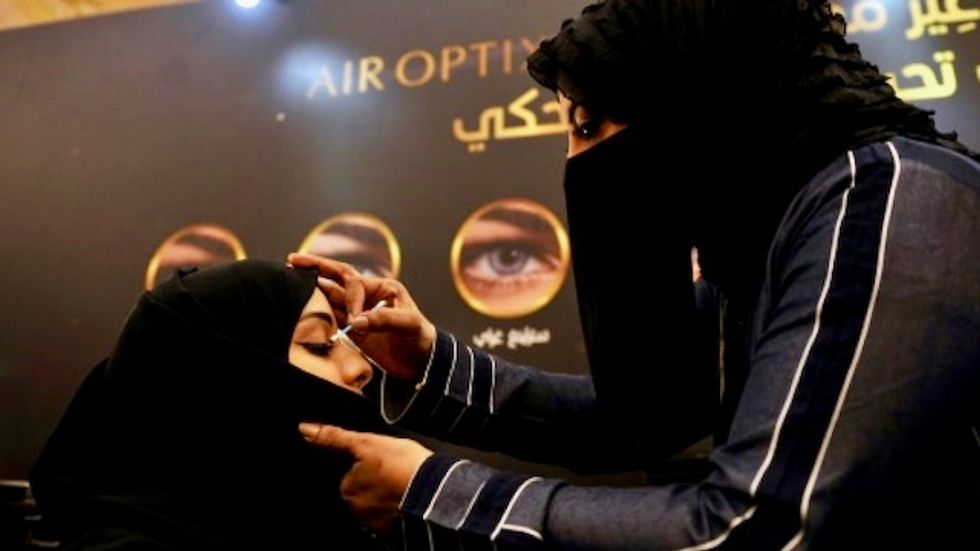 Saudi salesman Majd had just begun his wedding preparations when his fiancee sought to enshrine in their marriage contract a condition already guaranteed by law -- her right to drive.

Wedding contracts have long been a safety net for brides in the deeply patriarchal society, used to guarantee demands that are often otherwise vulnerable to the whims of the husband or his family.

Such legally binding contracts typically codify anything from the woman's right to have her own house, hire a maid, or to study or work.

But after the kingdom last year lifted a decades-long ban on female motorists, a popular new condition in the contracts is the right to own and drive a car, according to documents seen by AFP and interviews with wedding clerics.

Majd, 29, who is due to marry this month in his native Dammam in eastern Saudi Arabia, signed off on two demands from his 21-year-old fiancee ?- the right to drive and to work after marriage, according to the contract he shared with AFP.

"She said she (would) like to be independent," explained Majd, who requested his last name be withheld as the discussion was a private family matter.

Overturning the world's only ban on women drivers is the most palpable social change in the ultra-conservative kingdom, which is pursuing a wide-ranging liberalisation drive.

To drive, women do not require the explicit approval of their male "guardians" -- husbands, fathers and other male relatives, whose permission is needed by women to study, get married and even leave prison.

But it remains unclear whether women have any legal recourse should their guardians prevent them from taking the wheel.

And many in the kingdom appear to be trapped in this troubling scenario.

"Some women prefer to include the driving condition in their contract to avoid any marital conflicts" over the issue, said Abdulmohsen al-Ajemi, a Riyadh wedding cleric who received his first such enquiry from the family of an engaged woman last week.

"It's a way to guarantee the husband will keep his promise."

A breach of wedding conditions can be used by women as grounds for divorce, clerics say.

There are no official statistics on the number of such contracts. Saudi Arabia's justice and media ministries did not respond to AFP's request for comment.

But Munirah al-Sinani, a 72-year-old housewife in Dhahran, a city in the kingdom's east, said she had come across two such cases recently among her acquaintances.

"If you don't let me drive, if you say 'no', then khallas (finished) -- I don't want you," Sinani quoted one of the women as telling her potential spouse.

The trend underscores how women appear to be using the contracts to side-step patriarchy ?- and the conditions appear to be getting bolder.

A man in eastern Al-Ahsa city told AFP that during a marriage within his extended family, the bride demanded that her husband-to-be give up smoking.

Another woman asked that her husband have no access to her salary and another stipulated that she should not fall pregnant in the first year of marriage, according to cleric Ajemi.

A Saudi woman took social media by storm recently when she posted her wedding contract online.

The document prohibited her husband from taking a second wife, even though polygamy is legal in Islam.

Angry online trolls rebuked her husband as "unmanly" for accepting the condition.

Men also sometimes use wedding contracts to stipulate that the "wife will never work" or that she must agree to live with his mother, senior cleric Adel al-Kalbani told AFP.

The new conditions are a sign of the kingdom's social transformation that appears to be granting women more rights, Kalbani and Ajemi said.

But they could also cause strains in marriages in a traditional society where such conditions may be deemed insulting or signify a lack of trust in the husband, typically the head of a household.

Saudi media has already reported a spike in divorce cases in recent years.

"In the past, society did not listen to women. Husbands would turn around and firmly say 'No'," cleric Ajemi said.

"But now they are listening to the aspirations of women, adapting to their demands."