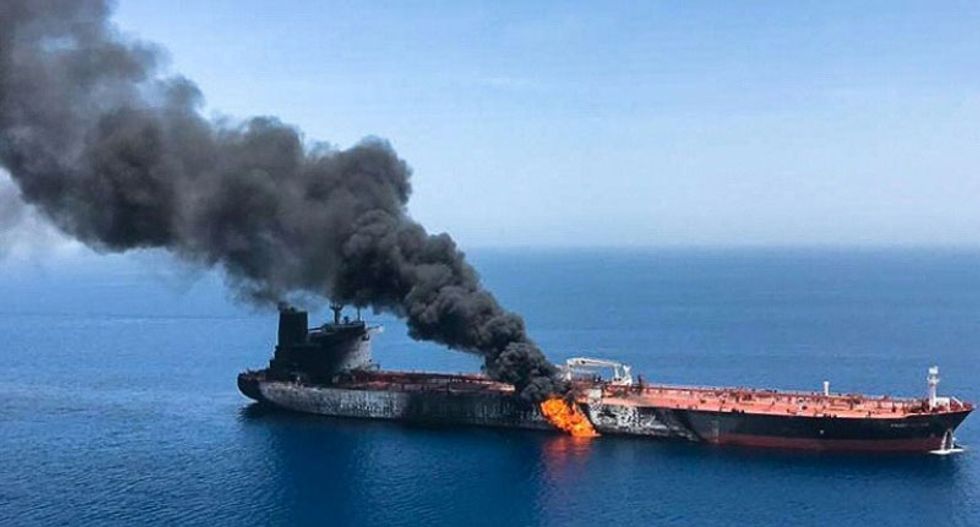 A picture obtained by AFP from Iranian News Agency ISNA on June 13, 2019 reportedly shows fire and smoke billowing from the Norwegian-owned Front Altair tanker, one of two vessels hit by suspected attacks in the waters of the Gulf of Oman

The United States accused Iran of carrying out attacks that left two tankers ablaze in the Gulf of Oman on Thursday, escalating tensions across the region and sending world oil prices soaring.

Secretary of State Mike Pompeo warned that Washington will defend its forces and allies in the region, and the United States pressed its case as the UN Security Council met to address the incident -- the second in a month in the strategic sea lane.

With tensions spiraling between Iran and the United States, the European Union called for "maximum restraint" as UN chief Antonio Guterres warned the world cannot afford a major confrontation in the Gulf.

But Pompeo said there was strong evidence of Iran's culpability, after the US Navy said it had spotted an unexploded magnetic limpet mine stuck to the hull of one of the vessels.

The US top diplomat said that in region only Iran had the ability to undertake such an operation.

"It is the assessment of the United States that the Islamic Republic of Iran is responsible for the attacks," Pompeo announced.

"This is based on intelligence, the weapons used, the level of expertise needed to execute the operation, recent similar Iranian attacks on shipping, and the fact that no proxy group operating in the area has the resources and proficiency to act with such a high degree of sophistication," he said.

The two vessels were struck by explosions in the early daylight hours Thursday after leaving the Strait of Hormuz and traveling around 25 nautical miles off Iran's southern coast headed toward Asia.

The Norwegian-owned Front Altair ethanol tanker was hit by three explosions, according to the Norwegian Maritime Authority, and continued to burn late Thursday.

Explosions also struck the Japanese-owned Kokuka Courageous, which was loaded down with methanol, but the fire on board was soon extinguished.

There was no claim of responsibility for the blasts, which struck both tankers at the waterline.

Iran said its navy rescued several dozen crew members of the two vessels, while the US Navy said it had picked up 21 from the Kokuka Courageous.

Washington has dispatched the destroyer USS Mason to the scene "to provide assistance," the US Central Command said in a statement.

Pompeo called Thursday's tanker explosions "the latest in a series of attacks" he alleged were undertaken by Iran or its "proxies," including, he said, a missile attack against a southern Saudi Arabia airport by the Iran-aligned Huthis in Yemen on Wednesday.

"Taken as a whole, these unprovoked attacks present a clear threat to international peace and security, a blatant assault on the freedom of navigation and an unacceptable campaign of escalating tension by Iran," he said.

The United States has accused the Islamic republic over May 12 attacks on four tankers anchored off the United Arab Emirates port of Fujairah, just at the entrance of the Hormuz Strait.

Pompeo said Iran was lashing out because of the impact of US and international sanctions, but said it had no right "to attack innocent civilians and engage in nuclear blackmail."

"The United States will defend its forces, interests and stand with our partners and allies to safeguard global commerce and regional stability," he warned.

The US also called Thursday for the UN Security Council to confront the "clear threat" posed by Iran, as the council met behind closed doors to hear a briefing on Washington's assessment that Tehran was responsible.

Oil prices jumped at the threat of open conflict at the Hormuz chokepoint, through which transit some 15 million barrels of crude oil every day, as well as hundreds of millions of dollars' worth of imports for the Gulf countries.

"We are in a dangerous moment in the region with this emerging pattern of attacks," said Elizabeth Dickinson, senior analyst with International Crisis Group.

"Any miscalculation or misunderstanding risks a spiral toward more direct confrontation," she told AFP.

The latest incident came as Abe was on an unprecedented visit to Tehran, seeking to defuse tensions.

"It is essential that Iran plays a constructive role in building solid peace and stability in the Middle East," Abe told a joint news conference with Iran's President Hassan Rouhani.

"Today, tension is rising in the Middle East. Some experts point out that the conflict might be triggered accidentally," he said.

Supreme Leader Khamenei rejected Abe's overture, saying: "We have no doubt in your goodwill and seriousness, but regarding what you said the US president told you, I don't consider Trump as a person worthy of exchanging messages with."

In Washington, Pompeo said the United States aimed to bring Iran back into negotiations -- "at the right time" -- over its nuclear program and regional activities.

But Trump dismissed the idea of early talks.

"I personally feel that it is too soon to even think about making a deal. They are not ready, and neither are we!" he tweeted.