The 5 most disgusting findings from the opioid trial -- so far 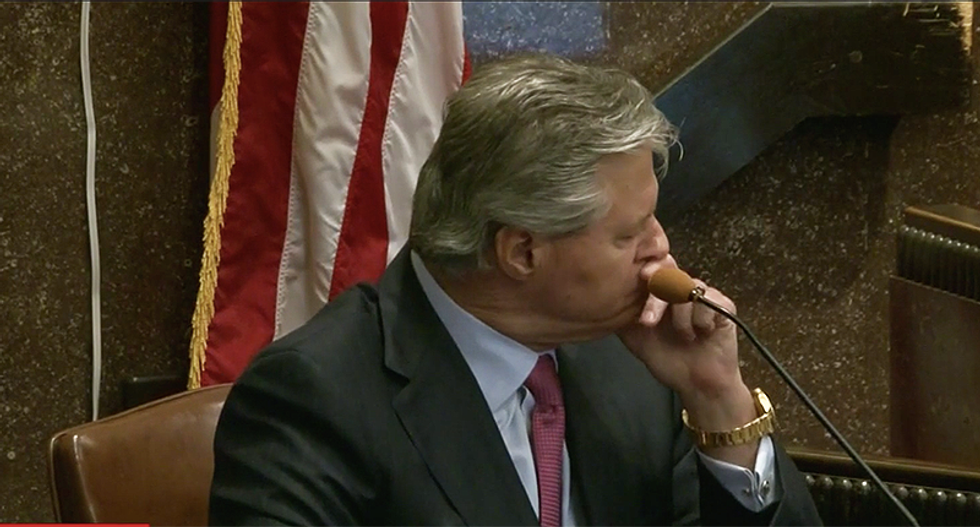 Wednesday marks day seven of the first opioid trial in the country. The Oklahoma attorney general and his team have been relentless in going after major corporations for their role in the crisis.

According to the state, Johnson & Johnson played a substantial role in perpetuating the crisis all for financial gain. To defend themselves, the company has trotted out a series of excuses or parsing of words to try and maintain some semblance of respectability. However, the documents the state of Oklahoma team has revealed point to another possible public relations nightmare for the already embattled company.

Here are the five most disgusting things said or uncovered so far:

1. Johnson & Johnson tells father of dead child marijuana was the real cause.

The father of University Football player Austin Box testified in the opioid trial last week that he had no idea his son was taking opioids. Austin didn't have a history of drug use but he had a history of serious injuries.

Like many who start taking opioids, Austin used them to help manage his pain. Austin's father "said in his testimony that Austin had no previous history of drug abuse or mental health problems, but he had sustained football injuries, including a small fracture in his lower back and a herniated disc," CNN reported.

When Austin died, opioids were found in his system along with an anti-anxiety drug. For some reason, a healthy graduate was found on the ground of a friend's home not breathing.

Box is one of five parents who will testify throughout the trial about what opioids did to their family. When Johnson & Johnson made their opening statement they attacked one of the dead children. J&J claimed that before the addict began using opioids they'd smoked marijuana. Their death, the lawyer said, was from heroin, not opioids.

The J&J claim flies in the faces of every ounce of data on marijuana usage. Opioids and heroin are vastly different and addicts don't actually move from pot to heroin, despite claims from "Just Say No" campaigns. However, when opioid pills become unavailable, addicts do tend to move onto heroin, which is cheaper and more easily accessible.

In their opening statement, J&J showed a video titled "Choices" that they did as a public service announcement to discourage teens from taking the medications of others. They did not market to children, they said.

What they neglected to mention is they marketed to doctors, hospitals, surgeons and more, claiming that these drugs should be prescribed to children.

In 2011, J&J's opioid, Duragesic, had been out for 20 years. Yet, a huge campaign was afoot in Oklahoma to get it prescribed more frequently. Using a marketing document, the state of Oklahoma asked a corporate representative to go through a document titled "Media Outreach Initiatives." The document has three areas titled — 'reaching out to': youth, returning veterans, media.

The same finding was discussed in the state's opening statement when they cited a Spring Break marketing campaign to hospitals and doctors to prescribe opioids for "sprains and strains." The campaign said that they should encourage youth that a generic drug was no substitute for pain.

3. Johnson & Johnson are trying to pit addicts and their families against the terminally ill and those with chronic pain.

Lawyers for the corporation tried to paint a picture for why opioids are desperately needed for those suffering from chronic pain.

“We have all suffered pain, some of us, fortunately, less than others," said lawyer Larry Ottaway. "We have hit our finger with a hammer, we have all suffered a toothache, we have all broken bones, been burned, and we hate it. It is the memory of what it was like to be pain-free that gets us through those times."

He went on to tell the court to think about what it would be like if the pain never went away.

"Serious chronic pain is a soul-stealing, life-robbing thief. It leads to depression, it leads to suicide, people can't take care of their own basic function," he said.

This perpetuates the stereotype that addicts are nothing more than bad people doing bad things. Those in desperate need are the ones using the drug responsibly.

The false narrative flies in the face of evidence that these companies all marketed the drug not merely for the terminally ill, not for cancer patients or those in hospice care; they marketed it for "sprains and strains."

If someone on their death bed becomes addicted to an opioid, it isn't even looked at as an addiction. They're simply managing the final moments of their lives. But when these drugs are peddled to those suffering minor injuries or temporary problems, it is another matter entirely.

Duragesic has been around for nearly three decades. Why did addiction not become a problem until recently? The state of Oklahoma says it's because companies like Johnson & Johnson began to push the drug on those not suffering from a terminal disease.

4. Johnson & Johnson ignored advice from their own scientists. They knew it was addictive.

Tuesday, J&J had scientists on the stand to outline the process of testing, research and development. In the case of the pain drug Nucynta, scientists knew that it was highly addictive when the drug was launched in 2011.

Because they knew it was addictive, they took measures to put a coating on the capsule that would prevent it from being crushed or broken. The J&J representative described a test where they put the pill in a coffee grinder, which dented the pill but ruined the blades.

This was their solution to a highly addictive drug: make it crush resistant and continue to peddle the drug.

“It's clear they ignored advice from their internal scientists with regard to using data to sell their pharmaceuticals," Attorney General Mike Hunter (R-OK) told cameras outside the courtroom.

5. Drug reps presented themselves as experts to medical professionals -- even though they had no training or education on the subject.

According to the state of Oklahoma attorneys, J&J had 140,000 doctors, hospitals, surgeons, nurses and other medical professions that they targeted for personal visits or calls from drug reps. Evidence showed that these drug representatives specifically targeted doctors that tended to be "high prescribers" to their patients. In some cases, doctors were wined and dined on expensive dinners and lavish nights out.

These drug representatives presented "themselves as pain experts, although typically they had no training in addiction science or the practice of medicine," Hunter told the press.

Hunter said that they have evidence showing that these drug reps were paid based on how many prescriptions the "targets" wrote for patients.