The Moon landings have a Nazi problem 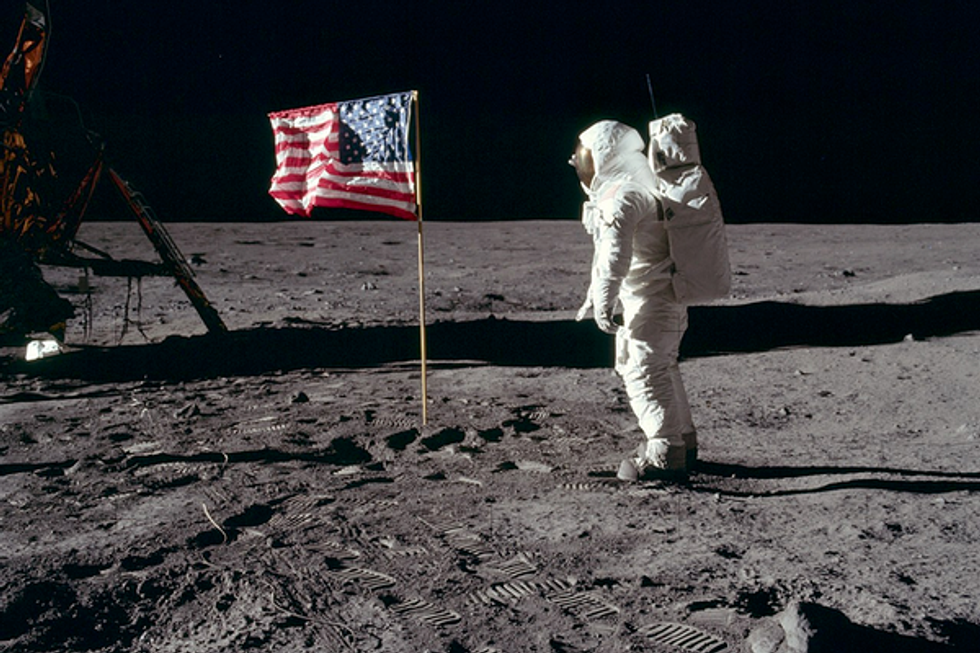 Somewhere in the scarier reaches of the internet, a conspiracy theory circulates that the Nazis landed on the moon in 1942. Maybe you’ve never heard that 27 years before Apollo 11, Hitler had a successful space program that bored into the lunar surface to create a moon base.

It doesn’t need saying that this idea is wrong – it’s beyond absurd. Part of what’s troubling with this myth is that people would treat the history of the Third Reich with anything other than sober realism. It feels dangerous.

But the Nazi moon theory is unnerving in another sense. It’s a distortion of an historical reality that is itself profoundly uncomfortable: Nazi technology and personnel were indeed central to the moon landing.

No, this isn’t news. Wernher von Braun is widely known as Hitler’s wunderkind engineer whose V-2 rocket rained down on London and Antwerp in the final year of the Second World War. After the war, the technological dividend of victory in Europe proved hard for the United States to resist: Under the auspices of Operation Paperclip, the US brought over 1600 V-2 engineers and their families.

That, of course, was exactly what von Braun had been hoping for. As another engineer put it, “we despise the French; we are mortally afraid of the Soviets; we do not believe that the British can afford us, so that leaves the Americans.” In time, Von Braun became the face of the Space Age, beaming an orbital future into living rooms courtesy of Walt Disney. Today, he’s remembered for his engineering brilliance and for his Saturn V engine that took Apollo 11 to the moon. He even has a crater on the moon named after him.

So what’s the problem? Wernher von Braun was, for the most part, an unrepentant Nazi. He joined the SS as well as the Nazi Party. The monumental status of his V-2 was partly founded on the 10,000 enslaved prisoners – Jews, Roma, Soviet soldiers and French resistance fighters – that the Reich expended in its construction. They died in the horrors of the Mittelbau-Dora concentration camp from hunger, cold and overwork. Some were executed for suspected sabotage. No, Von Braun wasn’t responsible for these deaths, but he was perfectly willing for his rocketry ambitions to be propelled by fascism.

The prevailing histories of the US space programme cede a great deal of credit to von Braun, much of it deserved. But as we commemorate the 50th anniversary of the Apollo 11 moon landings, the Nazi provenance of some technology and personnel is too often kept at bay.

There’s no need to focus exclusively on von Braun. There’s Arthur Rudolph who worked as project director of the Saturn V engines, and won a NASA Distinguished Service Medal. “I read Mein Kampf and agreed with a lot of things in it” Rudolph told a journalist in 1985. “Hitler's first six years, until the war started, were really marvellous. Everybody was happy”. Rudolph fled the US to avoid prosecution for war crimes.

Kurt H. Debus was director of NASA launch operations who also has a lunar crater named after him. He joined the Nazi Party, the SS and the Sturmabteilung (SA). And there’s Hubertus Strughold, ‘the father of space medicine’, who designed Apollo’s pressure suit and onboard life systems. Previously, in his Nazi career, he conducted oxygen deprivation experiments on epileptic children.

All this is well established but it’s the sort of context that often gets left out of popular accounts of Apollo.

The problem is not one of scholarship, at least not since the forensic work of von Braun scholars like Mike Neufeld. It’s that the Nazi provenance of US space exploration shapes the popular image of astronautics without it being recognized. Consider the innocuous rocket emoji, Twitter shorthand for soaring ambition and high achievement. It’s the archetypal rocket that rises from the pages of a children’s book. It’s also a thinly veiled V-2.

What’s most remarkable is the political discrepancy when it comes to the memorialization of America’s homegrown rocketeers. Von Braun and Debus may have craters on the moon, but no such honor has been bestowed on Frank J. Malina, founder of Caltech’s Jet Propulsion Laboratory. Before Operation Paperclip, he designed the first American rocket to reach extreme altitudes, the WAC Corporal; he was also a socialist and a campaigning anti-Nazi.

Malina had no involvement in Apollo but he made practical, theoretical and institutional contributions that to some degree were part of its success. At the time of Neil Armstrong’s giant leap, FBI agents were sitting in a car outside Malina’s Parisian home. His involvement in the Communist Party had made him persona non grata with the US space establishment. He had campaigned against racial segregation at home and supported the International Brigades in the Spanish Civil War. For this, he lost his passport in the 1950s and for a while was rendered an international fugitive.

While von Braun was relatively unencumbered by his Nazi past, it was irksome for Malina that the political baggage of anti-fascismdragged his own reputation. He felt sore that so little recognition was given to the early success of JPL’s rockets, all designed without technical influence from Germany:  ‘All glory to the German V-2’, Malina complained to a NASA historian, ‘but why home-grown American rocket developments is [sic] so frequently minimised is beyond me’.

Fifty years after Apollo 11 we’re still coming to terms with the Earth-shaking significance of its achievement. Yet the prior histories of how we got there are unevenly remembered, a pattern that was established in the McCarthy era that favored anti-communists and too easily forgave fascism. It’s time, surely, to de-Nazify the popular image of space exploration, and to question the many ways in which dutiful defenders of the Third Reich have inscribed their presence on the moon.

Fraser MacDonald is a lecturer in Human Geography at the University of Edinburgh where he teaches historical geography and the history of science. He has a regular by-line at The Guardian and has also written for Aeon Magazine, The Herald, The Age, The Australian, the LRB Books blog, among other publications.