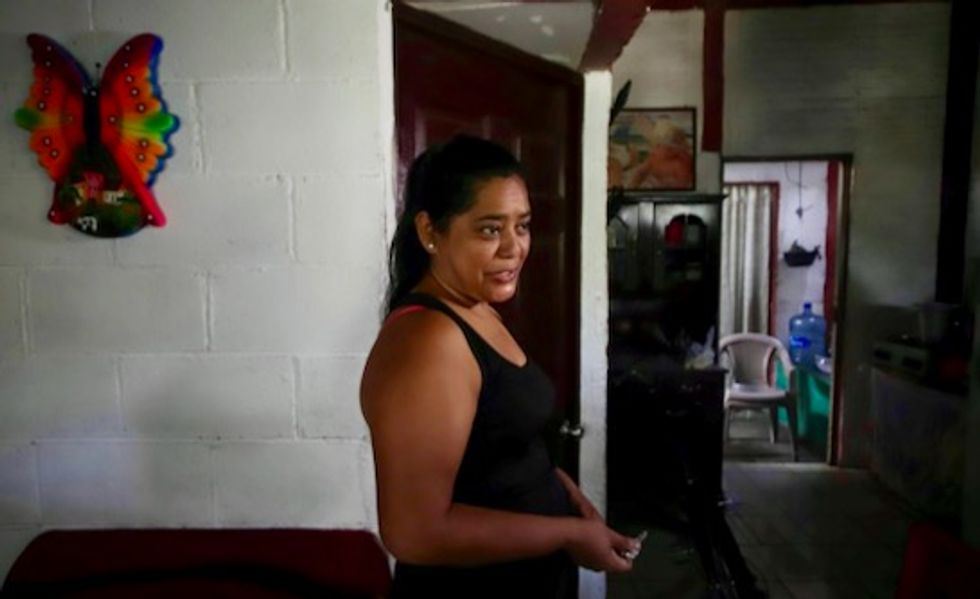 Rosa Ramirez, whose son Oscar and baby granddaughter Valeria were discovered drowned in the Rio Grande, spoke to AFP from her home in a gang-haunted barrio of San Salvador AFP / DIEGO LOPEZ

"They had this American dream," sobbed Rosa Ramirez after images of her drowned son and granddaughter, discovered face-down on the banks of the Rio Grande between Mexico and the United States, shocked the world on Wednesday.

The poignant pictures of Oscar Alberto Martinez and his toddler daughter Valeria -- not yet two years old -- has sparked outrage back home in El Salvador, where around 200 migrants like them leave for the United States daily, preparing to take similar risks.

"The pain has been immense. I still can't believe that my boy and my little granddaughter are dead, they only wanted to get to the United States.... they had this American dream -- to achieve a better life," Oscar's mother told AFP.

Ramirez was speaking by phone from her home in a gang-haunted eastern barrio of the capital San Salvador, where 25-year-old Oscar worked in a pizzeria before trying his luck as a migrant.

Grieving family members said Oscar, his wife Tania, 21 and toddler Valeria left El Salvador on April 3. They had spent two months in Mexico. Housed in a migrant shelter in Tapachula, they grew impatient after starting the process of applying for asylum in the US, and set out to try their luck at the border.

On Sunday, they arrived at the Rio Grande and attempted to cross.

Feeling unsafe, Tania remained on the Mexican side of the river, but was forced to watch in horror when Oscar and their daughter were dragged under by the current.

Oscar's mother said she remembered asking the couple "not to leave, that going to the United States is very dangerous."

But she said both parents wanted their girl to have a better future, and had even made plans for the money they dreamed of earning in the US.

AFP / DIEGO LOPEZRosa Ramirez said her son Oscar and his wife Tania -- now widowed aged 21 -- wanted their daughter to have a better future, and had even plans for the money they dreamed of earning in the United States

"My son told me that he dreamed that my Valeria would grow up in the United States, far from poverty. He wanted to buy a house for his family and have a better life," Ramirez said.

Oscar, who had carried his little girl inside his T-shirt as he crossed the sweeping river current, had always taken his family responsibilities very seriously, his mother said.

"The girl was his world and today we have the two of them gone to heaven," said his mother.

"I've always believed that to go without papers to the United States was a big risk and that it wasn't worth it," she said.

"This has happened to my boy and my little grandchild today -- we don't know who else is going to suffer tomorrow, all we know is that they don't want undocumented people in the United States."

In El Salvador, where social media has been flooded with messages of solidarity with the grieving family, Presidente Nayib Bukele ordered the bodies repatriated at government expense.

A funeral company has offered to hold the burial for free.

"This is a painful image of what our migrants suffer, and it is a call for governments to seek a solution to irregular migration," said Cesar Rios, executive director of the Salvadoran Migrant Institute.

"The deaths of Oscar and Valeria represent a failure to address the violence and desperation pushing people to take journeys of danger for the prospect of a life in safety and dignity," UN High Commissioner for Refugees Filippo Grandi said.

"This is compounded by the absence of safe pathways for people to seek protection, leaving people with no other choice than to risk their lives."