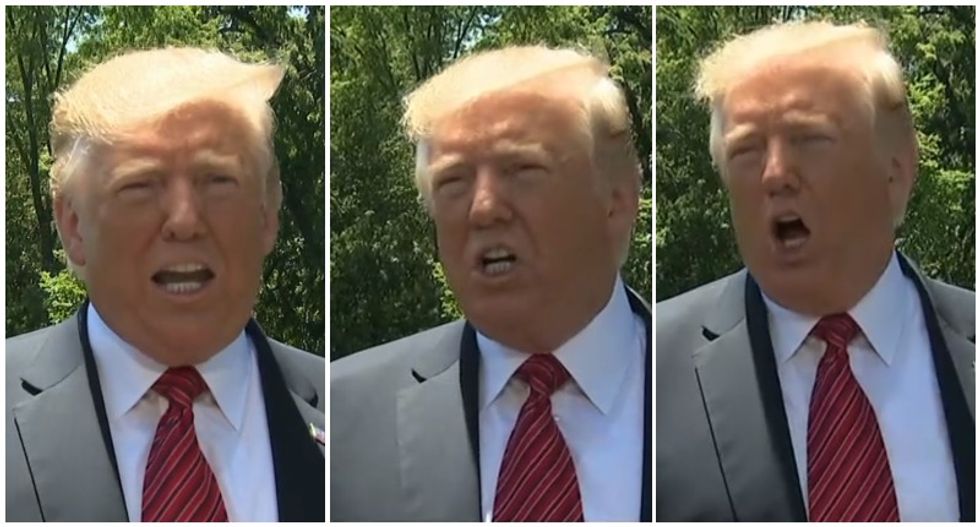 President Donald Trump went off on an angry rant on the White House South Lawn Tuesday that included attacks on his political rivals, as well as effusive praise for North Korean dictator Kim Jong-un.

Over the course of 15 or so minutes, Trump attacked former Vice President Joe Biden, House Speaker Nancy Pelosi, and the news media, even as he had warm words for authoritarian leaders with well documented histories of human rights abuses on a mass scale.

Here are the five craziest moments from Trump's impromptu rant below.

The president refused to show reporters the piece of paper and then put it back in his pocket -- but he insisted that it was real.

"I'm going to let Mexico do the announcement at the right time," Trump said of the purported deal.

ABC News points out, however, that "Mexico's Foreign Affairs Minister says there are no undisclosed parts of US- Mexico deal."

2.) Trump attacks Biden as "mentally weak." The president lashed out at the former vice president and predicted that his more liberal challengers would soon bring down his presidential campaign, as he noted that some of them were drawing larger crowds.

"I think he’s the weakest mentally and I think Joe is weak mentally," Trump said. "The others have much more energy."

3.) Trump claims that "nobody has treated farmers better" than he has, even as American farmers struggle under the fallout of his trade wars.

Even though farm bankruptcies in the Midwest have risen sharply over the last year thanks in part to his trade war, the president insisted that farmers are doing better than ever thanks to him.

"The best thing that ever happened to the farmers is me," the president said. "Nobody has treated the farmers better than Donald Trump."

4.) Trump gushes over another "beautiful" letter from Kim Jong-un. In contrast to his attacks on domestic critics, the president couldn't stop saying nice things about Kim.

First, the president said that he was happy to receive a "beautiful letter" from the North Korean leader.

"It was a very personal, very warm, very nice letter," the president said.

He then insisted that things were going just fine with his plans to denuclearize the Korean Peninsula, even though the North Koreans have still literally done nothing to draw down their nuclear program.

Most strangely, the president seemed apologetic about reports that the CIA had used Kim's half-brother as a spy on the regime.