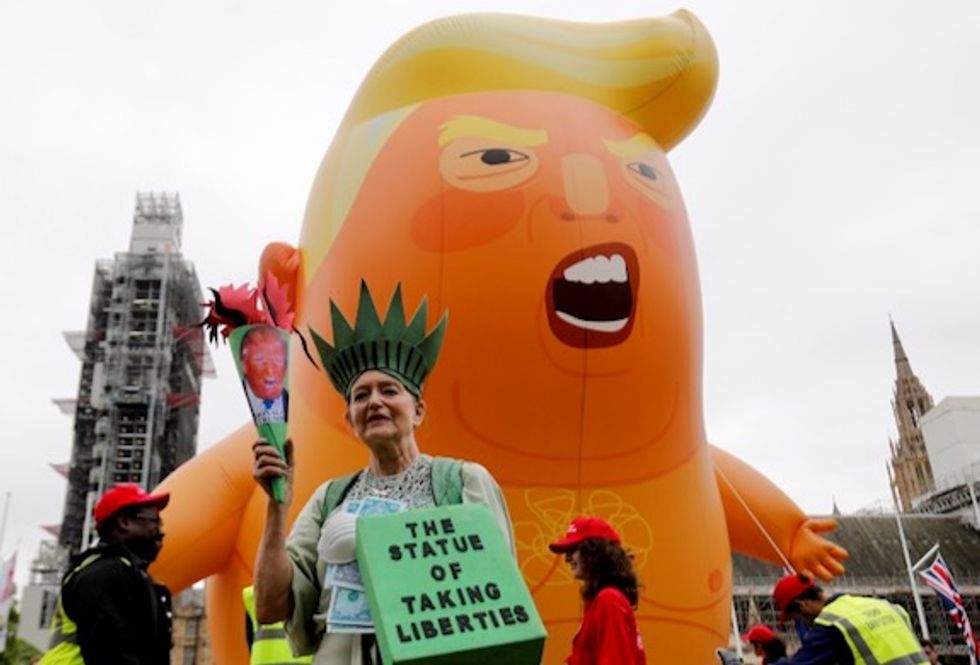 Anti-Trump demonstrators blew up a giant balloon of US President Donald Trump as an orange baby in Parliament Square, London AFP / Tolga AKMEN

President Donald Trump touted a "very, very substantial trade deal" between the United States and Britain after Brexit as he met Prime Minister Theresa May on Tuesday for fraught talks held amid street protests.

He joked to the outgoing British leader that she should "stick around" and reach a much stronger economic alliance with the United States once her country finally leaves the European Union.

"I think we will have a very very substantial trade deal. It will be a very fair deal," he told her at a meeting with business leaders and ministers, adding: "We're going to get it done."

Despite having repeatedly criticised May's Brexit strategy, Trump said she had done "a fantastic job".

Nearby, left-wing activists inflated an orange blimp of a baby Trump dressed in a diaper at a rally outside parliament that brought morning rush hour traffic to a halt.

It signalled the start of what are expected to be large protests against the president on the second day of his three-day state visit.

The president's visit is technically centred around Wednesday's D-Day 75th anniversary commemorations on the south shore of England.

But it comes at an especially chaotic time for Britain.

May will step down as Conservative Party leader on Friday over her inability to deliver Brexit despite focusing on little else in almost three years in office.

She will stay on as prime minister until her successor is found among 13 contenders who must make some difficult choices before the twice-delayed Brexit deadline on October 31.

Before he arrived, Trump urged Britain to walk away from the EU without an agreement.

He also suggested that Brexit-backing former foreign minister Boris Johnson would be an "excellent" leader to get it done.

He appeared to try to make amends for his diplomatic faux pas on Tuesday.

"I'd just like to congratulate you on having done a fantastic job on behalf of the people of the United States and its an honour to have worked with you," Trump told May.

But the "special relationship" between the two sides is being tested over different approaches to Iran, climate change and China.

Talks are likely to cover Britain's possible use of Chinese firm Huawei's technology in building its 5G network.

A senior UK government official told The Times newspaper that May would make "no apologies" over her reported decision to let Huawei build some non-essential parts of the next-generation mobile service.

The US administration has strongly hinted that this may limit its ability to share intelligence with Britain.

May told the business breakfast that Britain will strive to strike a "wider economic partnership" with its closest trading partner outside the EU.

"It is a great partnership, but I think it’s a partnership that we can take even further," she said.

AFP /British goods trade with the US

She will give Trump a copy of one of the most significant documents in the transatlantic "special relationship" -- a framed copy of Winston Churchill's personal draft of the 1941 Atlantic Charter that which defined the Allied goals post-World War II.

The two will later have a private tour of the Churchill War Rooms from which the wartime prime minister ran his operations.

Their talks are set to be accompanied by the sounds of "noise protests" of thousands of anti-Trump activists.

Opposition Labour Party leader Jeremy Corbyn promised to speak at the rally after skipping a banquet hosted by Queen Elizabeth II at Buckingham Palace on Monday in protest at Trump's policies.

Trump's day will be rounded off with dinner at the US ambassador's residence.

The heir to the throne Prince Charles and his wife Camilla will attend on behalf of the queen.

"The Queen and the entire royal family have been fantastic," Trump tweeted on Monday.