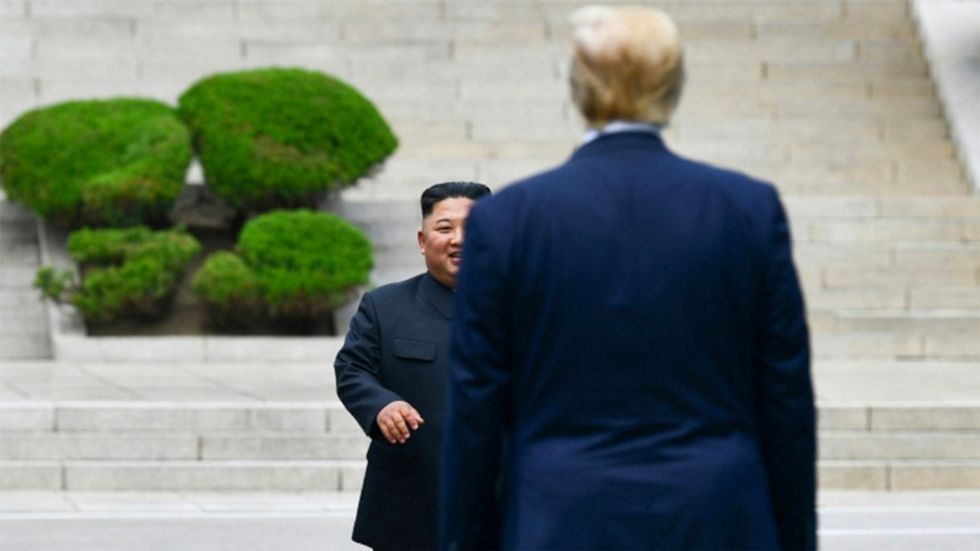 Moments after becoming the only sitting US president to set foot inside North Korea, Trump brought Kim back over the dividing line for a meeting where they agreed to start working-level talks on Pyongyang's nuclear weapons.

Trump also said he had invited the young leader to the White House "anytime he wants to do it".

"It's a great day for the world and it's an honor for me to be here," Trump said. "A lot of great things are happening."

As they sat down for discussions, Kim said their "handshake of peace" in a location that was "the symbol of the division of north and south" showed that "we are willing to put the past behind us."

The impromptu meeting in the DMZ -- after Trump issued an invitation on Twitter on Saturday -- came with negotiations between Pyongyang and Washington at a deadlock.

Their first summit took place in a blaze of publicity in Singapore last year but produced a vaguely-worded pledge about denuclearisation. A second meeting in Vietnam in February intended to put flesh on those bones broke up without agreement.

Contact between the two sides has since been minimal -- with Pyongyang issuing frequent criticisms of the US position -- but the two leaders exchanged a series of letters before Trump turned to Twitter to issue his offer to meet at the DMZ.

Trump's entry onto North Korean soil -- which he said was uncertain until the last moment -- is an extraordinary sequel to the scene at Kim's first summit with Moon last year, when the young leader invited the South Korean to walk over the Military Demarcation Line, as the border is officially known.

Moon seized on last year's Winter Olympics to broker the process between Pyongyang and Washington, after tensions soared in 2017 as the North carried out multiple missile launches and its biggest nuclear test to date, while Trump and Kim traded mutual insults and threats of war.

The significance of the meeting in the no-man's-land often referred to as the world's last Cold War frontier was "obvious", said Stimson Centre Asia analyst David Kim.

"It's historic for Trump to be the first US President enter North Korea soil, historic for Moon to meet, albeit briefly, with both leaders."

The meeting had the "potential to kick-start stalled negotiations", he told AFP, but added that working-level discussions would be crucial.

"What we need is substance, not theatrics."

The Hanoi summit foundered amid disagreements on what the North -- which has carried out six nuclear tests and developed missiles capable of reaching the entire US mainland -- would be willing to give up in exchange for relief from sanctions that have crippled its economy.

Soo Kim, a former CIA analyst now with RAND Corporation, said the North's "gravitational force has pulled Trump across the DMZ", calling it an "alluring elixir of wile, threatening rhetoric, stalling, and dangling of the remote possibility of resuming dialogue".

Such a meeting has long been sought by the North, but "Kim didn't have to lift a finger to get Trump to cross the DMZ", she added. "It was, in all appearances, by Trump's volition."

The DMZ has been a regular stop for US presidents visiting the South, a security ally -- although Trump's helicopter was forced to turn back by fog in 2017 -- while Panmunjom saw the first two summits between Moon and Kim last year.