Trump to turn DC’s annual nonpartisan July 4 celebration into event ‘centered on him and his supporters’: Report 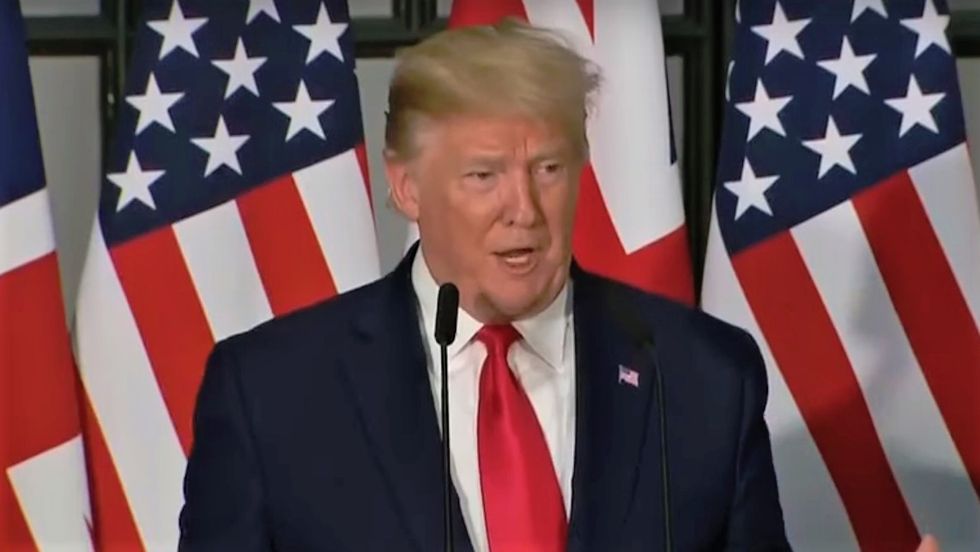 Since he became President, Donald Trump has been trying to transform America into a nation united under Trumpism. His attempt to hold a military parade similar to those in dictatorships like North Korea failed, after cost projections skyrocketed and his military advisors did their best to stonewall.

But now the President has found a way to "Make America Great Again," by turning a decades-old annual nonpartisan Fourth of July celebration of America and American history into a thinly-veiled campaign rally that would be, as The Washington Post reports, "a grand patriotic display centered on him and his supporters."

Hundreds of thousands of people are expected to flood the National Mall in Washington, D.C. for the event that the president – it is now official – will co-opt and commandeer.

Citing Washington, D.C. city officials and U.S. Park Police, the Post reports "President Trump plans to address the nation from the Lincoln Memorial on July 4 as part of an overhauled celebration of the nation’s Independence Day."

D.C. Mayor Muriel Bowser, who opposes President Trump taking over the celebration and using it as a political event, says her "great hope would be that he recognizes that the event is a unifying event that celebrates the birthday of our nation."

If there were any doubt that President Trump won't politicize the July 4 event, here's what he had to say on July 1, 2017, speaking at a "Celebrate Freedom" concert in Washington, D.C.

"In America we don't worship government, we worship God," Trump told attendees, who then broke out into chants of "USA! USA! USA!" just as they do at his campaign rallies.

"I remind you that we're going to start saying, 'Merry Christmas,' again," he added.

"I also want to speak to all of the people in our faith community who are here with us tonight," Trump continued, adding, "We don't want to see God forced out of our public square, driven out of our schools, or pushed out of our civic life. We want to see prayers before football games if they want to give prayers," he said at the event celebrating America's Independence.

He went on to brag about fulfilling his "campaign pledge to stop the Johnson Amendment from interfering with your First Amendment rights," literally applauding himself.

And here is Trump, just two weeks before the 2016 election, saying, "Imagine what or country could accomplish if we started to work together as one people, under one God, saluting one American flag," a sentiment he has shared repeatedly since.

The darkness of Boris Johnson: a psychologist on the prime minister’s unpalatable personality traits

The Conversation
In all the chaos that characterises the administration of Boris Johnson, it’s sometimes difficult to understand why the prime minister behaves the way he does. Why does he never really apologise or admit mistakes?

Most recently, Johnson continues to insist that he did not know he was breaking any rules by having parties during pandemic lockdowns. It’s just the latest example of behaviour that, I would argue, can only be understood in terms of psychological factors.

First, let me be clear: I am not attempting to diagnose the prime minister with a personality disorder. Like many psychologists nowadays, I believe it’s too simplistic to think in terms of specific conditions like narcissistic personality disorder or sociopathy. I prefer to use the concept of a “dark triad” of three personality traits that belong together – psychopathy, narcissism and machiavellianism. This makes sense because these traits almost always overlap and are difficult to distinguish from one another. The traits exist on a continuum and are more pronounced in some people than others.