Trump turns from pomp to politics with Britain's May 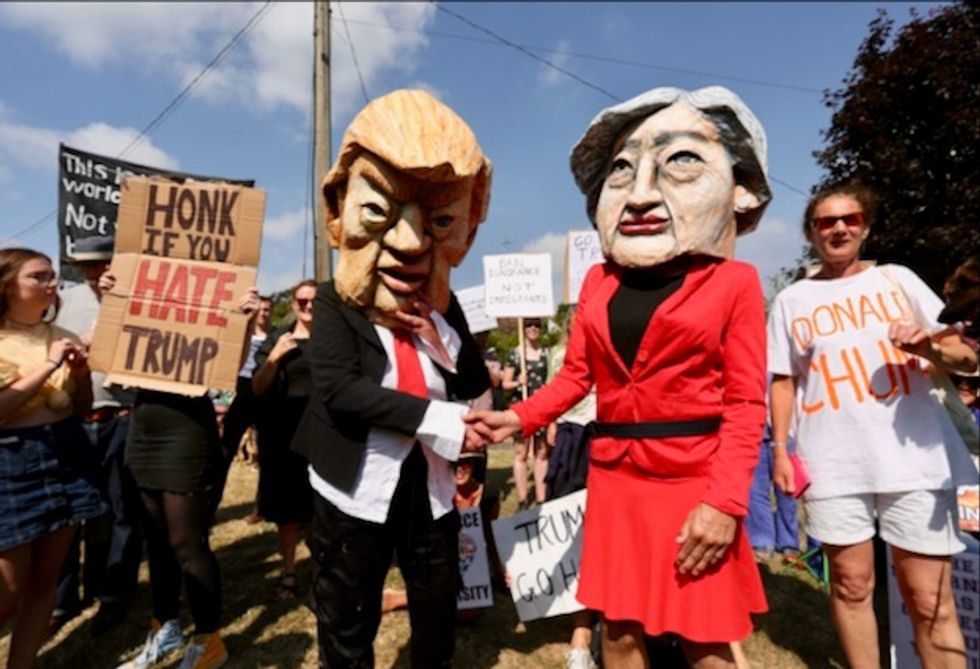 US President Donald Trump turns from pomp and ceremony to politics and business on Tuesday as he meets Prime Minister Theresa May on the second day of a state visit to Britain expected to be accompanied by mass protests.

An orange blimp of a baby Trump dressed in a diaper is set to fly over central London as the US leader sits down for breakfast with UK business executives before heading into negotiations with May's team.

But it comes at an especially chaotic time for Britain.

May will step down as Conservative Party leader on Friday over her inability to deliver Brexit despite focusing on little else in three years on the job.

She will stay on as prime minister until her successor is found among 13 contenders who must make some difficult choices before the twice-delayed Brexit deadline on October 31.

Trump has already weighed in by urging Britain to walk away from the EU without an agreement -- and suggested that Brexit-backing former foreign minister Boris Johnson would be an "excellent" choice to head the government and get it done.

He tweeted on Monday that the US could offer Britain a "big Trade Deal" once it drops the "shackles" of the European trade bloc of which it has been a member for 46 years.

But the "special relationship" between the two countries will also be tested by Britain's possible use of Chinese firm Huawei's technology in 5G networks, and different approaches to Iran.

A senior UK government official told The Times newspaper that May would make "no apologies" over her reported decision to let Huawei build some non-essential parts of the next-generation mobile service.

The US administration has strongly hinted that this may limit its ability to share intelligence with Britain.

May is expected to tell the business breakfast that Britain will strive to strike a US "bilateral free trade agreement, with broader economic cooperation".

"Through dialogue like this we can ensure that our economic partnership not only endures but continues to grow stronger for many years to come," May said in comments released by her office.

AFP /British goods trade with the US

"We will want to see better access to services in the US and we will have to offer something in return," Fox told BBC radio on Tuesday.

May will give Trump a copy of one of the most significant documents in the transatlantic "special relationship" -- a framed copy of Winston Churchill's personal draft of the 1941 Atlantic Charter that which defined the Allied goals post-World War II.

Trump and May will also go on a private tour of the Churchill War Rooms from which Britain's wartime prime minister ran his operations.

Their talks are set to be accompanied by the sounds of a "noise protests" of thousands of anti-Trump activists.

The demonstration will rally round a giant inflatable balloon mocking Trump by depicting him as an orange baby.

Opposition Labour Party leader Jeremy Corbyn promised to speak at the rally after skipping a banquet hosted by Queen Elizabeth II at Buckingham Palace on Monday in protest at Trump's policies.

He said the protest was "an opportunity to stand in solidarity with those he's attacked in America, around the world and in our own country".

Trump's day will be rounded off with dinner at the US ambassador's residence.

The heir to the throne Prince Charles and his wife Camilla will attend on behalf of the queen.

"The Queen and the entire Royal family have been fantastic," Trump tweeted on Monday.

"The relationship with the United Kingdom is very strong."

May and Trump will conclude the trip by joining other world leaders on Wednesday in the English port of Portsmouth to commemorate 75 years since the D-Day landings changed the course of World War II.

"We owe an immeasurable debt to the British, American and Allied soldiers who began the liberation of Europe on 6th June 1944," the queen told Monday's banquet.