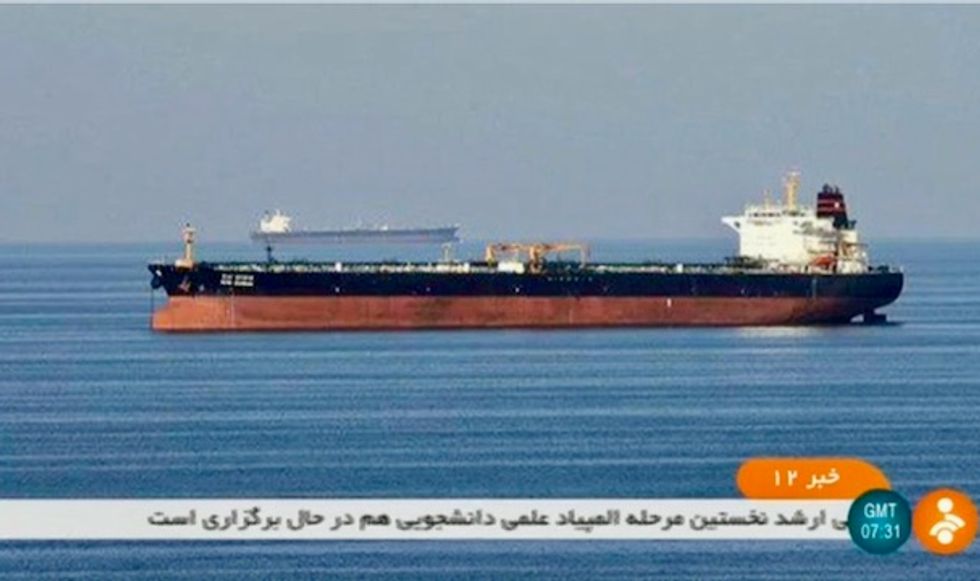 The crews of two oil tankers were evacuated off the coast of Iran on Thursday after they were reportedly attacked and caught fire in the Gulf of Oman, sending world oil prices soaring.

The mystery incident, the second involving shipping in the strategic sea lane in only a few weeks, came amid spiralling tensions between Tehran and Washington, which has pointed the finger at Iran over tanker attacks in May.

Iran said its navy had rescued 44 crew members after the two vessels caught fire in "accidents" off its coast.

But the US Fifth Fleet said its warships had received distress calls from both vessels in a "reported attack".

The Norwegian Maritime Authority said three explosions were reported on board the Norwegian-owned tanker Front Altair after it was "attacked" along with the Singapore-owned cargo carrier Kokuka Courageous.

Iranian state media said the first incident occurred on board the Front Altair at 8:50 am (0420 GMT) 25 nautical miles off Bandar-e-Jask in southern Iran.

The Marshall Islands-flagged tanker was carrying a cargo of ethanol from Qatar to Taiwan, official news agency IRNA reported.

"As the ship caught fire, 23 of the crew jumped into the water and were saved by a passing ship and handed over to the Iranian rescue unit," it said.

"An hour after the first accident the second ship caught fire at 9:50 am 28 nautical miles off the port."

The Panama-flagged Kokuka Courageous was headed to Singapore from Saudi Arabia with a cargo of methanol, and 21 of its crew jumped and were rescued, according to IRNA.

"The 21 crew of the vessel abandoned ship after the incident on board which resulted in damage to the ship's hull starboard side," it said.

"One crew man from the Kokuka Courageous was slightly injured in the incident and is receiving first aid."

It said the vessel is about 70 nautical miles from the United Arab Emirates and just 14 from the coast of Iran.

Tehran said it has dispatched a helicopter from the port of Bandar-e-Jask to the ships' location for "further investigation".

The US Fifth Fleet said: "We are aware of the reported attack on tankers in the Gulf of Oman.

"US naval forces in the region received two separate distress calls at 6:12 am. local time and a second one at 7:00 am."

Oil prices spiked after a merchant shipping information service run by Britain's Royal Navy reported an "incident" in the Gulf of Oman.

Global oil prices gained around four percent immediately after the reports of the attack. Benchmark Brent oil was trading at $61.74 a barrel, up about three percent.

The Gulf of Oman lies at the other end of the strategic Strait of Hormuz from the Gulf, part of a vital shipping lane through which at least 15 million barrels of crude oil and hundreds of millions of dollars of non-oil imports pass.

On May 12, four oil tankers -- two Saudi, one Norwegian and one Emirati -- were damaged in still unexplained attacks in the Gulf of Oman off the United Arab Emirates.

US National Security Advisor John Bolton said Iranian naval mines were almost certainly behind those attacks but declined to provide specific evidence that Tehran was involved.

The UAE said last week that initial findings of a five-nation investigation delivered to the United Nations pointed to the likelihood that a state was behind the bombings, but added there was no evidence yet that Iran was involved.

Thursday's incident came after Iran-aligned Huthi rebels on Wednesday said they had fired a missile at a Saudi airport. Saudi officials said 26 people were wounded in the attack on Ahba airport.

Iran has repeatedly rejected accusations that it was behind the sabotage.

But its arch-rival Saudi Arabia still maintains it was the most likely culprit.

Saudi King Salman earlier this month warned a meeting of the Organisation of Islamic Cooperation that "terrorist" attacks in the Gulf region could imperil global oil supplies, as he sought to galvanise support among Islamic countries against arch-rival Iran.

The world's top oil exporter has ratcheted up tensions with Iran after the sabotage attacks, which were followed by an attack on a key Saudi oil pipeline, which was claimed by Yemen's Huthi rebels.