US releases grainy video of 'Iran forces' next to tanker 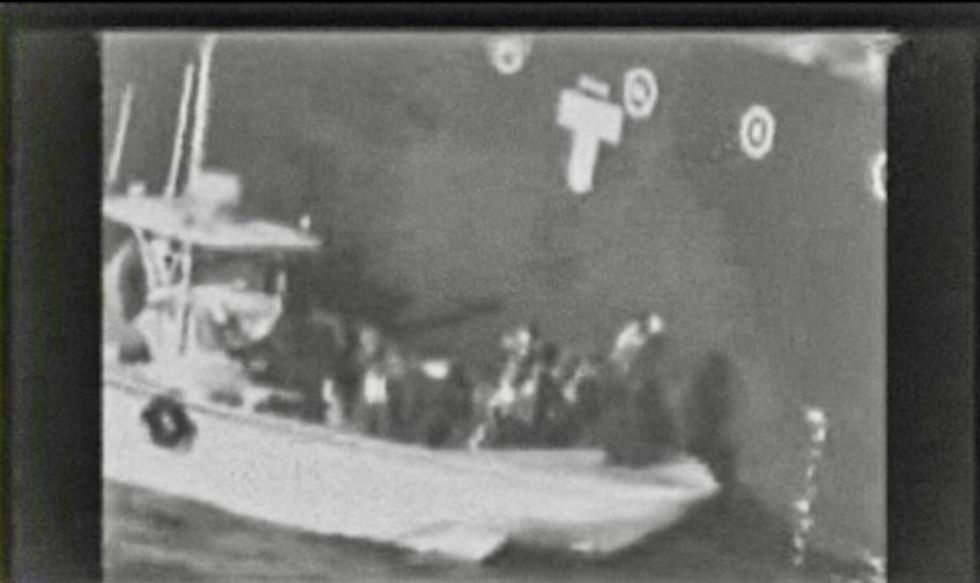 Washington has blamed Iran for a twin attack on tankers in sensitive Gulf waters, releasing grainy footage it said implicates Iranian Revolutionary Guard forces in one of the operations.

The video, published Thursday on the US Central Command's website, purports to show the crew of an Iranian patrol boat removing an object from the hull of a vessel whose markings appear to match archive footage and pictures of the Japanese-owned tanker Kokuka Courageous.

The tanker had been transporting methanol from the United Arab Emirates towards the Indian Ocean when it was attacked on Thursday morning, along with the Front Altair, owned by the Oslo-listed company Frontline, after passing through the Strait of Hormuz.

In the CENTCOM footage, a speedboat carrying between eight and 10 people, apparently wearing life jackets, lies in calm waters alongside a tanker that appears to be the Kokuka Courageous.

In the very first frames of the video, a person standing on the bow of the speedboat seems to remove a light-coloured object, slightly bigger than a large dinner plate, from the tanker's hull.

"An IRGC Gashti Class patrol boat approached the M/T Kokuka Courageous and was observed and recorded removing (an) unexploded limpet mine," CENTCOM said in its description of the footage.

Another shot, slightly zoomed out, shows the speedboat, between 10-15 metres (30-50 feet) long, backing away from the larger vessel.

Again, the markings, railings and pipes on the tanker appear to match archive AFP footage of the Kokuka Courageous.

As the shot pans away, tracking the reversing patrol boat, a dark patch can be seen further back on the tanker's hull, just above the waterline.

This seems to match damage shown in a handout powerpoint slide separately released by the US military.

Another close-up of the smaller boat shows what appears to be a machine gun, mounted in front of a small wheelhouse.

CENTCOM did not say how the footage was taken, but it was apparently shot from the air.

The operators of the Kokuka Courageous, citing eyewitness reports from the ship's crew, have said it was hit by a "flying object" before suffering a second blast on board.

The US navy said 21 crew members had abandoned ship after "discovering a probable unexploded limpet mine on their hull following an initial explosion".

It said they were picked up by a Dutch tugboat then transferred to the USS Bainbridge.

Analyst Ali Ansari, an Iran expert at Scotland's University of St Andrews and a senior associate at the Royal United Services Institute, warned against jumping to conclusions over the video.

"The situation is particularly febrile and the consequences will be significant so we should not rush to judgement," he said.

He said the figures on the patrol boat appeared to remove something from the tanker's hull, but "we don't know what it is and it's impossible to confirm".

Iran has dismissed as "baseless" US accusations it executed the twin attacks.

Iranian Foreign Minister Mohammad Javad Zarif tweeted that the US had "immediately jumped to make allegations against Iran without a shred of factual or circumstantial evidence".

But US President Trump was adamant that "Iran did do it".

"You saw the boat at night, successfully trying to take the mine off -- and that was exposed," he told Fox News television on Friday, after the video was released.

CENTCOM said the video had been taken at 4.10 pm local time.