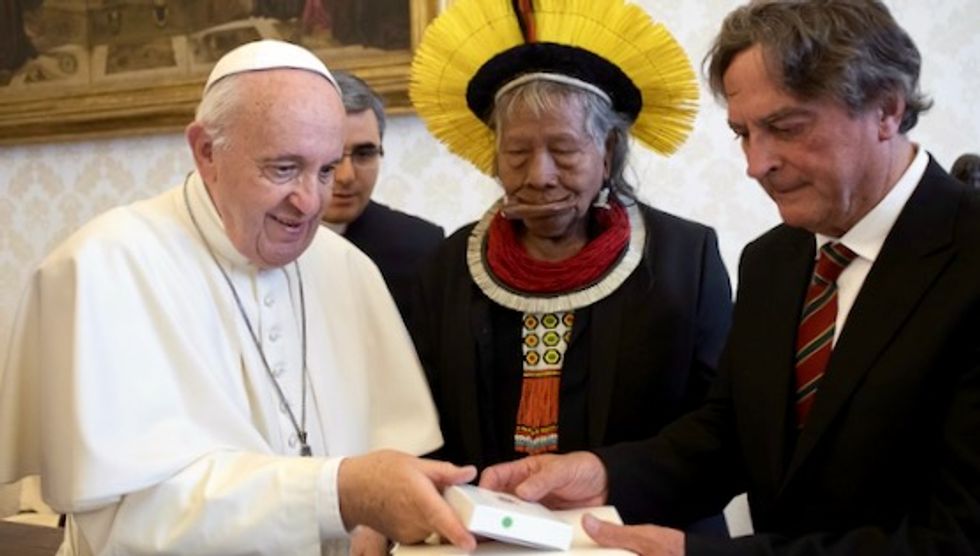 Handout, VATICAN MEDIA, AFP | Pope Francis exchanges gifts with Brazil's indigenous chief Raoni Metuktire during a private audience at the Vatican, on May 29, 2019

The Vatican has formally opened debate on letting married men be ordained as priests in remote parts of the Amazon where priests are so few that Catholics can go weeks or months without attending a Mass.

The proposal was in a working document released Monday for an October meeting of South American bishops on the Amazon.

The document, prepared by the Vatican based on input from the region, suggested officials study “the possibility of priestly ordination for older men, preferably indigenous and respected and accepted by their communities, even if they have stable families, for the region’s most remote areas”.

The much-anticipated discussion will form part of the October 6 to 27 synod.

Pope Francis has repeatedly said there is no doctrinal prohibition on married men who have reached a certain age from becoming priests, and therefore the discipline could be changed.

But in January this year he seemed to retreat from the idea, describing celibacy as "a gift to the Church".

"I don't think optional celibacy should be allowed. No," he said.

The pope nevertheless conceded "some possibilities for far flung places", such as Pacific islands or the Amazon where "there is a pastoral necessity", though he added that the decision was not his to make.

Saint Peter, the church's first pope, had a mother-in-law, according to the bible.

Some within the church believe it is time to join many eastern rite Catholic Churches in permitting married men to take the cloth. Married Anglican priests keen to convert to Catholicism have already been welcomed over.

The Vatican's number two, Cardinal Pietro Parolin, suggested in an interview last year that the church could "gradually look in depth" at the issue, while ruling out any "drastic change".

Some 60,000 priests have given up their vocation over the past few decades, often to marry.

The synod discussion paper also raises the prospect of a more inclusive role for women in the Amazon, adding their presence "is not always adequately taken into consideration".

It suggested women could have a greater educational participation.

The synod will also consider the environmental challenges facing the Amazon, a vast area of rainforest mainly in Brazil but also touching eight other countries.

The elderly Kayapo chief, internationally recognisable through his traditional lip plate and feather headdress, is seeking to raise one million euros to better protect the Amazon's Xingu reserve - home to many of Brazil's tribal peoples - from loggers, farmers and fire.