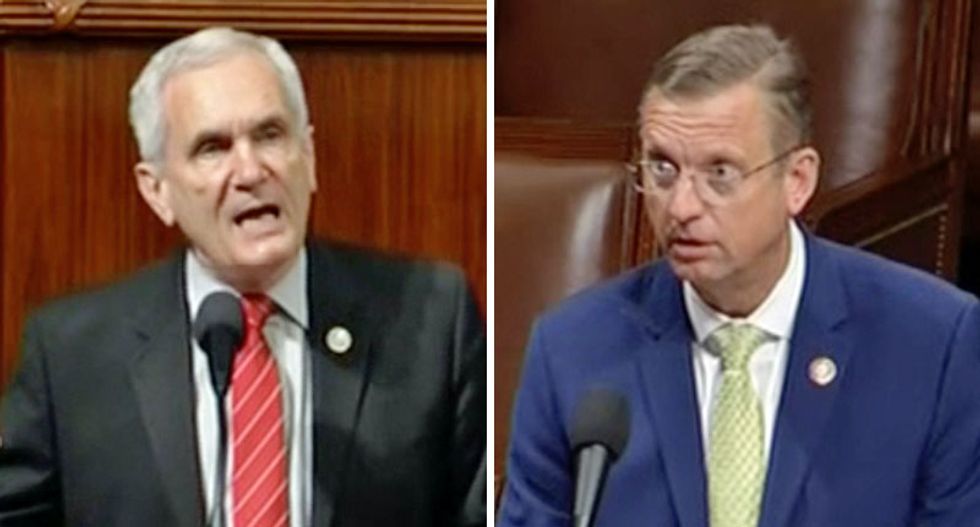 Composite image of Rep. Lloyd Doggett (D-TX) and Rep. Doug Collins (R-GA) on the floor of the House of Representatives (screengrabs)

The top Republican on the House Judiciary Committee brought the House of Representatives to a standstill on Tuesday with repeated complaints about Donald Trump being referred to as a racist.

It started with a speech by Rep. Lloydd Doggett (D-TX) complaining about President Donald Trump having done nothing for the Dreamers.

Doggett noted that Trump had once professed to support the dreamers, recalling Trump's tweets from September of 2017.

Does anybody really want to throw out good, educated and accomplished young people who have jobs, some serving in the military? Really!.....
— Donald J. Trump (@Donald J. Trump)1505384921.0

...They have been in our country for many years through no fault of their own - brought in by parents at young age. Plus BIG border security
— Donald J. Trump (@Donald J. Trump)1505385341.0

"Unfortunately, Donald Trump is a man of his last tweet," Doggett said.

"Later, when a bipartisan group of senators went to meet with the president and present a viable bipartisan plan, he flew into a racist rant and refused to act," Doggett said.

At that point, the ranking Republican on Judiciary, Rep. Doug Collins (R-GA) rose for a point of parliamentary inquiry.

"The speaker reminds members to refrain from engaging in personalities toward the president," the speaker pro tempore repeated.

Collins, for his part, claimed it was "an issue that needs to be addressed."