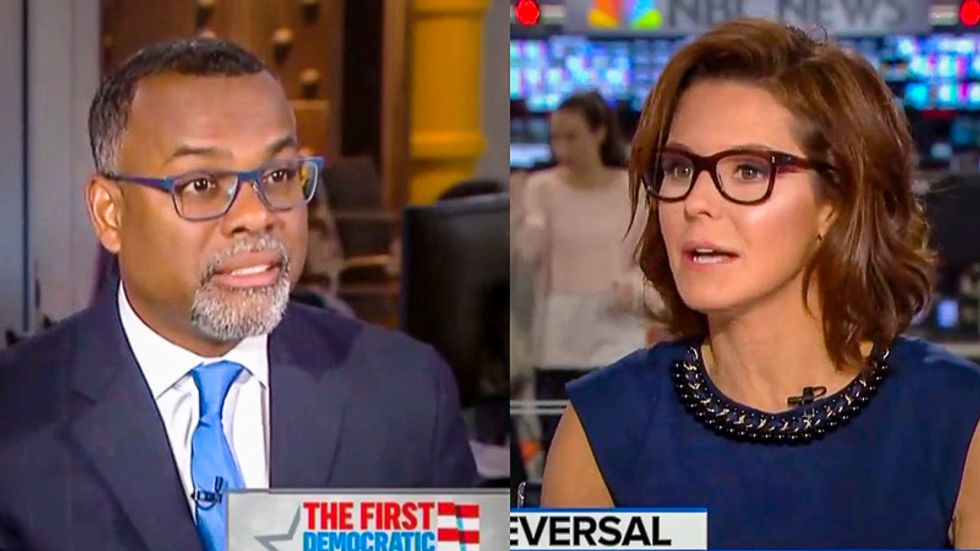 Princeton professor Eddie Glaude gave MSNBC's Stephanie Ruhle a lesson in social justice on Tuesday after she spoke out in defense of a student who was rejected by Harvard over racist remarks.

During a panel discussion on MSNBC, Glaude argued that Kyle Kashuv should face consequences for his actions, which include using the N-word and calling to "kill all the f*cking Jews."

"It makes sense to me that an institution like Harvard would want not to admit him to their community," Glaude said.

"But if we dug into every old post or private message of every student in America, is there a risk that we could take this too far?" Ruhle said, echoing a recent Fox News segment. "Some people out there are saying they’re kids. Kids are kids. But that is when you accept someone into college, when they’re a teenager."

Ruhle pointed out that Kashuv, who is a survivor of the at Marjory Stoneman Douglas High School shooting, is one of the few pro-gun activists "in his lane."

"This young man posted 'kill the f-ing Jews,'" former Republican congressman David Jolly reminded Ruhle. "He posted the N-word repeatedly and he referred to one of these shoot-em-up video games and suggested that they should put a map of that on his high school."

"My immediate reaction," Jolly continued, "these are the social media postings we see of a shooter and we ask, 'Where were the signs?'"

"Is that too far?" Ruhle asked. "Can you make a leap like that?"

"It is not," Jolly replied. "You have to question how do we promote somebody with these social media posts and their background. The young man deserves redemption, but he also deserves a closer look as to whether somebody with this profile should be able to purchase a firearm... This is a bigger question than Harvard."

"They're in the right not to accept him," Ruhle agreed. "But now this is a national incident. You've got an 18-year-old boy on national TV, maybe it's an international incident. Should Harvard be doing this -- should they be in a position where they're rescinding or should they not have accepted him in the first place?"

"I want to be very clear here, Stephanie," Glaude stated. "It's so interesting how innocence can be attached to certain bodies. Right? Here you have a kid -- he was 16 years old [when he made the comments]... Central Park Five, one of them was 14. Right?"

"So we have people who want to attribute innocence to certain folk but want to deny innocence to other folk," he continued. "And so part of what I'm suggesting here is not just that he's young, he will grow. If you hold that view, hold it consistently for all of our children."

Glaude added: "He said the N-word, he said kill Jews, he was embroiled in kind of a hate-filled discourse. Harvard does not want that as part of its community."