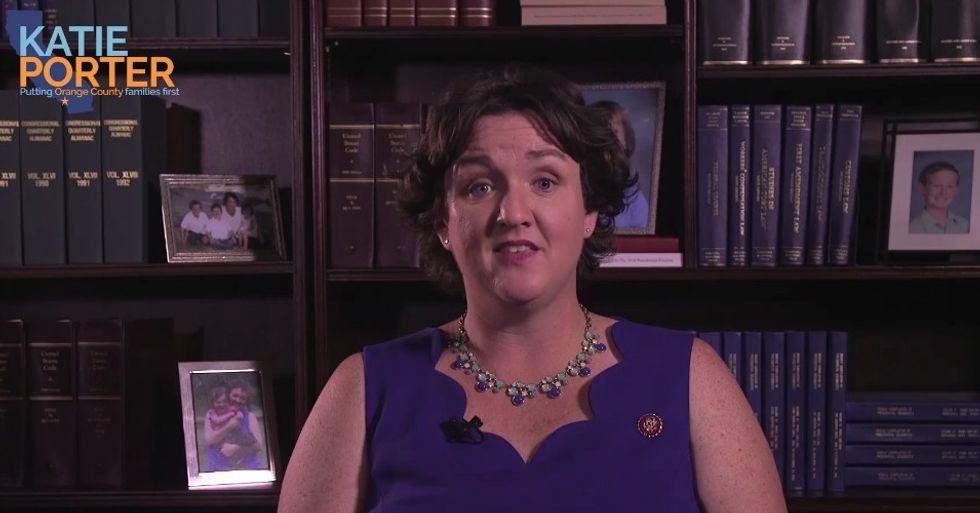 Congresswoman Katie Porter, in a video posted on social media Monday night, shared with residents of her purple California district why she is joining dozens of other Democrats who support launching an impeachment inquiry against President Donald Trump.

"I didn't come to Congress to impeach the president," said the first-term representative. "But when faced with a crisis of this magnitude, I cannot with a clean conscience ignore my duty to defend the Constitution. I can't claim to be committed to rooting out corruption and putting people over politics and then not apply those same principles and standards in all of the work I do."

"Congress must continue the work of Special Counsel Mueller," said Porter. "In his report and public remarks, Director Mueller emphasized that under current law, he did not have the option to indict the president. But despite the limits of his authority, the special counsel was clear that he could not exonerate the president. And he presented extensive evidence of obstruction of justice that requires continued investigation by Congress."

More than 65 House Democrats already support impeachment proceedings. However, as NBC News noted, "the vast majority are from safe, solidly Democratic districts. Porter joins Rep. Tom Malinowski of New Jersey as the only two lawmakers who barely won their election against Republican incumbents in the last election to endorse an impeachment inquiry." Only one Republican, Rep. Justin Amash of Michigan, backs an investigation.

That Porter, described by the New York Times as "a law professor who narrowly flipped part of Republicans' Southern California stronghold to the Democrats in last year's midterm elections," is now publicly backing an inquiry into Trump led some progressives and political observers to call out Democrats from solidly blue districts who have been silent on the subject or oppose impeachment proceedings.

"If Katie Porter, from a purple district, is brave enough to do the right thing, what are House Dems from safe blue districts doing?" tweeted Brian Fallon, executive director of the group Demand Justice.

Adam Best, progressive podcast host of "The Left," concurred, tweeting that "if Katie Porter can support impeachment as a new congresswoman who just flipped a district that had NEVER gone blue before other Democrats have no excuse not to get on board, too."

Indivisible co-founder Ezra Levin, noting that Porter was an outlier given California District 45th's history of electing Republicans to the House, tweeted that "districts like hers gave Dems their majority." Responding to the congresswoman's support for impeachment proceedings, Levin wrote, "This is huge."

Indivisible, which strongly supports an impeachment inquiry targeting Trump, pointed out that Porter's announcement followed calls for congressional action from her constituents:

On June 15, voters and activists organized a national day of action to pressure Congress to #ImpeachTrump. Earlier this month, more than two dozen progressive groups sent Democratic House Speaker Nancy Pelosi a letter that, as Common Dreams reported, "expressed 'deep disappointment and concern' about Pelosi's refusal to listen to the public and members of her own leadership team on the necessity of launching impeachment hearings."

The storming of the U.S. Capitol on Jan. 6, which was Christmas Eve for Eastern Orthodox Christians, was a perfect holiday gift for Russian politicians and state-controlled Russian media.

While President Vladimir Putin has remained silent so far, reaction from political leaders was instantaneous, and the topic has dominated Russian news coverage ever since.

Louis Capriotti, 45, was ordered held without bond by a Chicago district court this Wednesday after he was arrested and charged for leaving a threatening voicemail for a member of Congress from New Jersey, ABC7 reports.

"Threats hurt people," U.S. Magistrate Judge Gabriel Fuentes said, according to the Chicago Tribune. "They terrorize people. They make people afraid. There's an argument to be made that's what they're intended to do in the first place."