Who are the four men charged with downing of MH17? 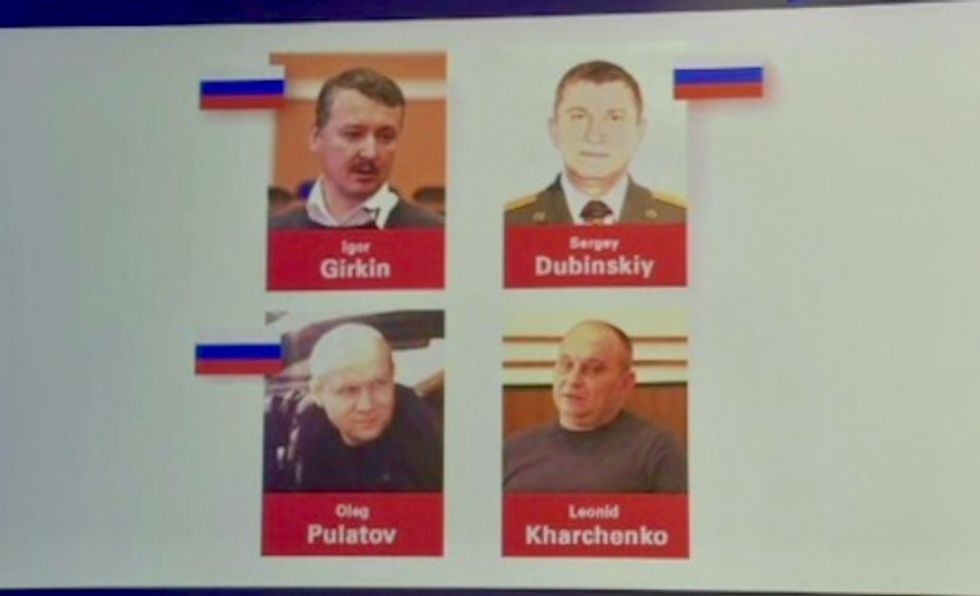 Investigators have charged four people -- three Russians, including former intelligence agent Igor Girkin, and one Ukrainian -- over the shooting down of flight MH17 AFP

International investigators have charged three Russians and one Ukrainian with murder over the 2014 shooting down of flight MH17 above rebel-held eastern Ukraine in which 298 people were killed.

Here are the four suspects named by the Dutch-led team on Wednesday.

Igor Girkin -- also known by his pseudonym "Strelkov" -- is the most high-profile suspect.

The former Russian intelligence agent with fighting experience from Chechnya to Yugoslavia claims to kick started the war in East Ukraine as the commander of pro-Moscow fighters that captured key locations around the region.

In 2014 Girkin ruled the then rebel stronghold of Slavyansk with an iron fist, with executions for petty theft reportedly carried out under his rule.

But he was squeezed out of the separatist leadership later that year under mysterious conditions and returned to Russia, where he lost all influence and reportedly had financial difficulties.

On Wednesday, the historical re-enactment fan denied pro-Russian separatists were behind the missile attack.

"I can only say that rebels did not shoot down the Boeing," he told the Interfax news agency.

He is thought to be living in Moscow.

Sergei Dubinsky, nicknamed "Khmury", reportedly met Girkin when he fought in the First Chechen War in the mid-1990s. He is also a veteran of the 1980s Soviet war in Afghanistan.

At the time of the downing of the plane, Dubinsky was allegedly serving as the military intelligence chief of the separatists in eastern Ukraine.

He has also been linked to Russia's GRU intelligence service.

According to the independent Bellingcat website, Dubinsky had "requested the delivery of a battle-ready BUK missile launcher" -- the type of missile investigators said downed the plane.

The website also said Dubinky was "involved in the removal of the BUK back to Russia after the downing of MH17."

He reportedly resides in Rostov-on-Don, his native city in southern Russia near the border with Ukraine.

In the summer of 2014 he was one of Dubinsky's deputies at the heart of the separatist military leadership.

He allegedly helped transport the BUK system to Ukraine and, after the downing of the plane, helped ensure the safety of the area where the MH17 debris fell.

Ukrainian citizen Leonid Kharchenko, nicknamed "Krot", was also linked to the separatist leadership when the plane was downed.

According to Bellingcat, he was involved in "securing the BUK missile launcher near the launch site." The website also reported that Kharchenko could have coordinated the transport of the missile launcher from the main city in separatist eastern Ukraine, Donetsk.

According to Ukrainian media, Kharchenko is wanted by Kiev for the siege of government buildings and his role in helping the rebels.

In an interview published in 2015 by a separatist news agency, he called authorities in Kiev a "fascist regime" that is built on a "Nazi" ideology.

Ukrainian security services told AFP Wednesday that they had "no information" on Kharchenko's whereabouts or whether he was still alive.