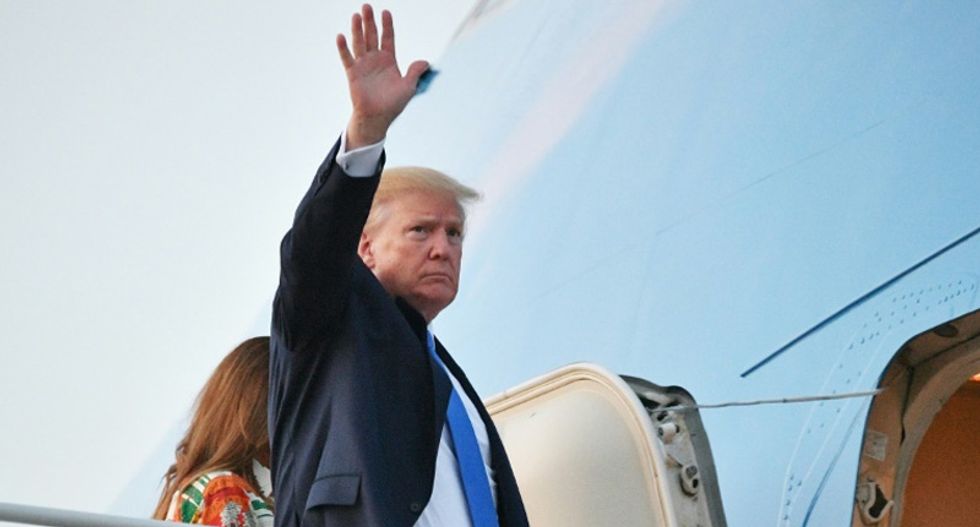 The President stirred up controversy ahead of the visit, calling both Duchess Meghan Markle and London's Mayor Sadiq Khan "nasty."

Trump's near-constant deviation from standard diplomatic procedure is one of the many reasons he's prompted a group of mental health professionals to question his fitness for office.

Raw Story spoke with Dr. Bandy X. Lee, a forensic psychiatrist and a renowned expert on violence at Yale School of Medicine, the president of the World Mental Health Coalition and editor of the New York Times bestseller, “The Dangerous Case of Donald Trump: 37 Psychiatrists and Mental Health Experts Assess a President.”

Lee has been consulting with the World Health Organization since 2002 and teaching at Yale Law School since 2003. She is author of the authoritative textbook, “Violence: An Interdisciplinary Approach to Causes, Consequences, and Cures.” She and the coauthors of the Trump book recently prepared a damning but definitive mental health analysis of the Mueller report, which is now gathering signatures (https://dangerouscase.org/action_needed/).

Raw Story: Your Washington Examiner interview has created a firestorm since its publication. Can you explain what it is about?

Dr. Bandy X. Lee: There was a lot of me in the news in January 2018 when I revealed to the public that I had met with Congress members about our concerns over the president’s dangerousness and capacity to serve in office. It is now happening again because I am following up with one of them regarding our recent mental health analysis of the Mueller report.

While more than fifty lawmakers had invited or had come to hear us (mostly myself but also Dr. James Gilligan) because of a book I edited, The Dangerous Case of Donald Trump—which was always intended as a public service, from which we are not taking any profit—we never reached out ourselves. Because they were all Democrats with only one incidental Republican encounter, I even refrained from follow-up contact, with the hope that Republican lawmakers would feel comfortable in reaching out. None of them have to this day.

Raw Story: So you reached out to Rep. John Yarmuth’s (D-KY) office?

Dr. Bandy X. Lee:: I did so for the first time in eighteen months, because we now have our report with a very disturbing and urgent conclusion, confirming the results of an earlier interdisciplinary conference where top experts of all different fields gathered in Washington and agreed on the dangers of the current presidency. It is now important that we make our conclusions known to the appropriate authorities. Because Chairman John Yarmuth had proposed a bipartisan meeting in the past, we thought his office was the logical choice. This is a matter that deals with fundamental public health and safety, and it is important that it be bipartisan and beyond politics.

We expected a closed-door, informational session, which Republicans as well as Democrats would feel comfortable attending, but Chairman Yarmuth surprised us with an open meeting proposal instead, such as a congressional town hall. This will be a question-and-answer session to clarify our report, supplemented with a ten-minute “highlights” video from the conference. A handful of mental health experts and panelists from the interdisciplinary meeting who can make it will be present for lawmakers’ benefit.

Raw Story: Are you representing the American Psychiatric Association?

Bandy X. Lee: I wish the Association would step up. I resigned over ten years ago because of its excessive pharmaceutical industry ties, which its policies now reflect. I now represent an organization of thousands of mental health professionals who are calling out the Association for distorting ethics to support power, when it is supposed to represent professional ethics, just as the attorney general has distorted the law to support power, when he is supposed to represent the law.

It misled the public into believing that mental health professionals only practice clinical psychiatry (which deals with diagnosing and treating individual patients) and blocking us from practicing preventive psychiatry (which deals with whole populations, including warning against threats to public safety). Public health is a primary responsibility, unlike our etiquette toward a public figure. By misinforming the public and then blocking all discussion, the Association has protected a political figure over society while stigmatizing an entire field.

Raw Story: Are there specific incidents or areas of the president’s behavior you plan to focus on?

Bandy X. Lee: Our report squarely focuses on the president’s current mental capacity to discharge the duties of his office—at the most basic level so that there is no ambiguity. This has nothing to do with diagnosis of a mental illness, and this does not even require a personal interview. We still made our best, reasonable attempt at obtaining one, so that we will have been as thorough as possible, applying the highest standards.

The people of this nation should be concerned about mental capacity, perhaps even more so than criminality, since a criminally conspiring captain can still steer a ship. We are speaking of someone who cannot steer the ship and yet is pretending to; it is the most dangerous scenario possible.

We are entering scary times, whereby misrepresentations of the Mueller report have emboldened the president: the complexities and gentility on the part of the special counsel alone have become opportunities for distortion. He recognizes this, as when he suggested on television that people should be executed for treason. He is acutely aware that enablers such as William Barr and other types are surrounding him for opportunism and corruption, which will weaken the people’s power. His recent trip to the U.K., where no one called him out for being illegitimate, has furthered the impression of normalcy and has given him all he needs for his “base.” The nation’s biggest businesses also favor war, which Mr. Trump is more likely to deliver: attacking Iran or Venezuela is more likely in someone who needs to bolster his self-image through a show of force. Nuclear war is also especially attractive to him, not to mention the slower annihilation by ignoring our last chance to correct human influence on the climate.