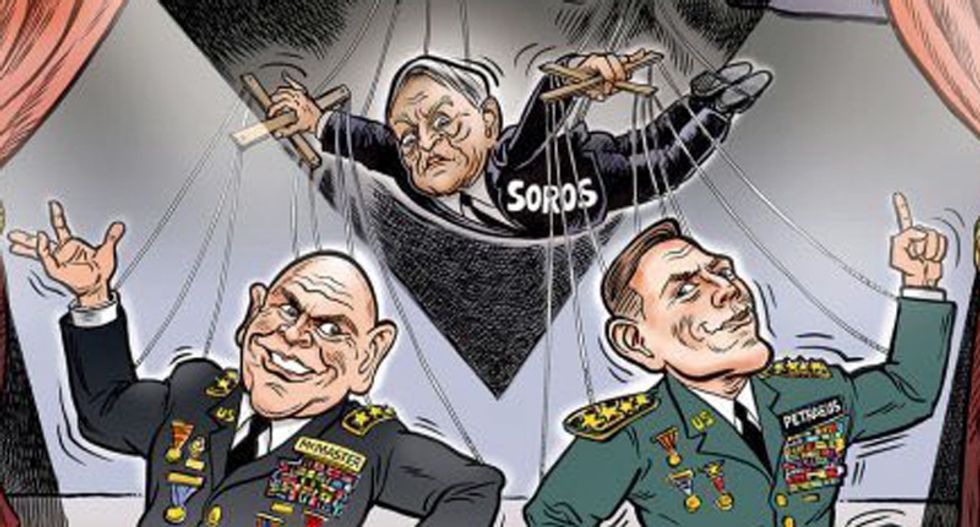 The Donald Trump administration has invited a controversial right-wing cartoonist to the White House, the artist revealed on Tuesday.

The Anti-Defamation League blasted a Ben Garrison in 2017 for a shocking cartoon that appeared on a website attacking H.R. McMaster.

"This site prominently features an anti-Semitic cartoon by Ben Garrison, an artist known for cartoons with right-wing, anti-government and conspiratorial themes. On his own website, Garrison claims that the cartoon was “commissioned” by Mike Cernovich," ADL explained.

"The Garrison cartoon features a stage with McMaster and retired general David Petraeus as puppets being manipulated by left-leaning philanthropist George Soros, perceived as a major villain across the far right spectrum in the United States and the subject of many conspiracy theories. Soros, who is Jewish, is himself depicted in the cartoon with puppet strings, being guided by a greenish hand and arm labeled “Rothschilds,” the name of a Jewish family long involved in the banking industry," ADL continued. "The thrust of the cartoon is clear: McMaster is merely a puppet of a Jewish conspiracy."

On July 11th, Garrison with be feted at the White House.

Man who drew a cartoon the @ADL calls “blatantly anti-Semitic” says he was invited to the White House for a social… https://t.co/3DLcKBLkh0
— Jake Tapper (@Jake Tapper)1562440506.0