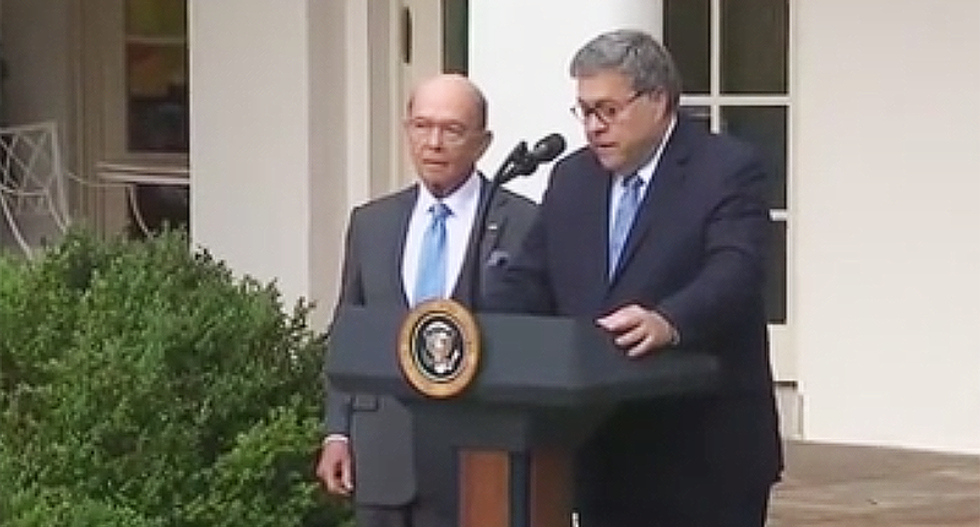 In a Rose Garden press conference Thursday, President Donald Trump announced that he is giving up his battle for a citizenship question on the U.S. Census. The executive order he will sign says that the other agencies can work using other data to guestimate the number of undocumented people in the country. It's the same tactic that has been used since 1950 and what Commerce Secretary Wilbur Ross suggested in January 2018.

Trump's speech was an overtly political one, where he attacked Democrats for being unpatriotic, saying, in passing, that in Minnesota they're not allowing the Pledge of Allegiance. He began with a sarcastic comment before claiming that Democrats are somehow trying to erase citizenship entirely.

But the truly awkward moment when Attorney General Bill Barr blamed Ross for messing up their attempts to game the census questionnaires.

He began with gushing praise of the president for taking such an extraordinary step to back down from the fight.

"But while the Supreme Court correctly recognized that it would be entirely appropriate to include citizenship questions on the census, it nevertheless held that the Commerce Department did not quality explain its decisions for doing so on the 2020 census," Barr said with Ross standing next to him. "Because, as the Supreme Court recognized, the defect in the commerce department’s decision was curable with a better record, the president asked me to work with Secretary Ross to determine whether there remained a viable path for including a citizenship question on the census. I did so."

New York Times reporter Maggie Haberman tweeted after the speech that Trump has been "livid" with Ross over this issue.

Barr, without naming Ross, put this squarely on Ross. In most - but not all - conversations in last two weeks, Trum… https://t.co/wa2vJertDl
— Maggie Haberman (@Maggie Haberman)1562881817.0

Watch his portion of the speech below: