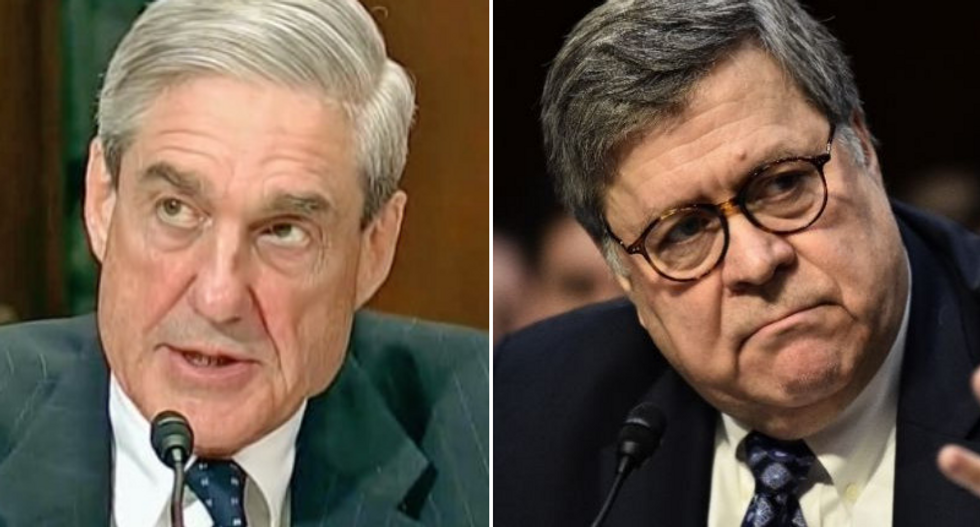 When asked in April whether he was opposed to the special counsel testifying before Congress — an event now scheduled for July 17 — Attorney General Bill Barr clearly told lawmakers, “I have no objection to Bob Mueller personally testifying."

But now he has changed his tune.

Speaking to reporters on Monday, Barr said Democrats were trying to make a "public spectacle" by subpoenaing Mueller to testify about the Russia investigation.

“I’m not sure what purpose is served by dragging him up there and trying to grill him,” Barr said. “I don’t think Mueller should be treated that way or subject himself to that, if he doesn’t want to.”

Barr also said the Justice Department would support Mueller if he sought to violate the subpoena that Congress issued for his testimony. In a press conference announcing the end of his work in the department, Mueller indicated that he hoped that he wouldn't have to speak publicly about the investigation, and he resisted requests by lawmakers to testify on camera. However, once he was officially subpoenaed, he said he would comply, and there's no indication that he has changed his mind.

Barr's claim that Mueller would have legal grounds to refuse a subpoena is highly dubious. Lawmakers have every right to ask Mueller about his report and the investigation behind it. Mueller has said that his report should serve as his testimony, but lawmakers will inevitably have questions about what he decided to include and not include in the report and about how it should be interpreted. Mueller will likely refuse to answer some questions on various grounds — and Democrats are unlikely to want to hold him in contempt for holding back — but the idea that he could outright reject a subpoena because he "doesn't want to" testify is senseless. And Barr must know that.

The transparently bogus nature of Barr's claims lends an air of desperation to his remarks. Why is he so willing to encourage Mueller not to testify on such feeble grounds?

The most obvious explanation is simply that he fears Democrats may achieve their purpose. They'll use the hearings to highlight key findings of the Mueller report, and that will be bad for Trump. They may even be able to elicit some new information from Mueller, potentially exposing the rift between him and attorney general and harming Barr's credibility.

But there's another reason Barr might be nervous about Mueller's testimony. Perhaps surprising to some, many Republicans are actually eager to have Mueller testify. They want to go after Mueller for his supposed bias against the president, and they want to feed the ridiculous narratives constructed in right-wing media suggesting that the whole Russia investigation was actually a conspiracy against Trump all along.

Barr has played into these narratives too, saying the Trump campaign was "spied" on by the Obama administration and that it may have been done for nefarious purposes. The attorney general may be worried that Mueller will stand up to these theories and deftly smack them down, undercutting narratives that Barr thinks play in Trump's favor.