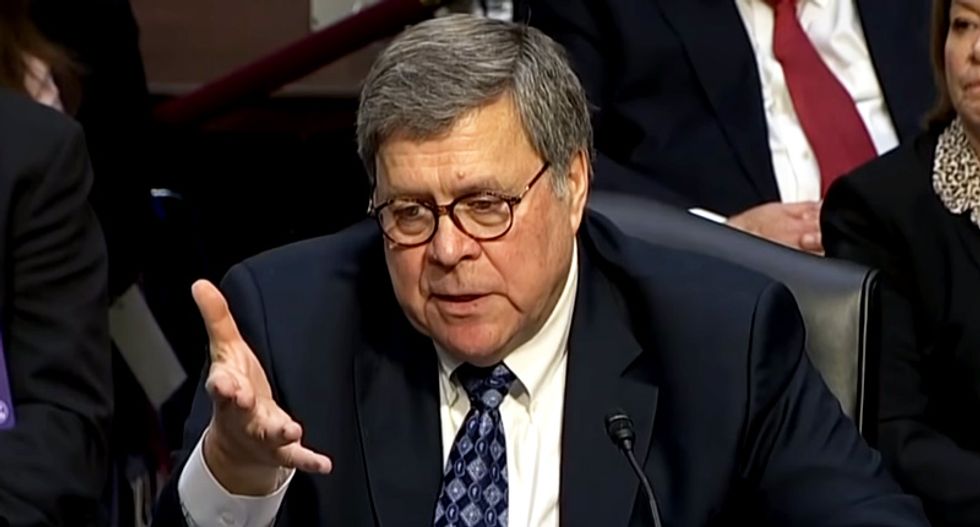 Attorney General Bill Barr has once again made a mess of his role at the top of the Justice Department, and it revealed once again why neither he nor President Donald Trump can faithfully fulfill their constitutional duties.

Questions about the integrity of the Justice Department arose immediately when Jeffrey Epstein, the registered sex offender and financier with ties to powerful people like Trump and President Bill Clinton, was arrested over the weekend on sex trafficking charges. Epstein had previously come under scrutiny by the feds for these same allegations, but for unknown reasons — perhaps his connections to powerful people — he got away without any federal charges and faced a relatively light penalty from a state prosecution in 2008.

So it was natural to wonder, since Trump is now president, whether the new prosecution will face any undue influence. Some legal experts were worried that Barr might use his position at the top of the Justice Department to insert himself into the federal prosecutors’ decision-making if he thought it might help Trump, and I argued Monday that the mere appearance of this possibility was enough reason for him to recuse from the case.

Shortly thereafter on Monday, Barr announced that he would recuse, citing his work for a law firm that Epstein once employed.

But then on Tuesday, Barr abruptly reversed himself. He said while he would be recused from the review of Epstein’s previous plea deal, he would not be recused from the new case against the onetime Trumpa friend. Legal experts were baffled. Reports said that Barr had met with ethics officials prior to making this recusal decision, but notably, they did not say he followed their advice.

This observation on my part might seem like excessive hairsplitting, but the previous acting attorney general was advised by ethics officials to recuse from the Russia investigation, but he refused to do it. It’s not a wild leap to believe that might be happening again.

More disturbingly, though, is the possibility that Trump heard Barr say he was recused from the investigation and told him to unrecuse himself. Again, this might seem like absurd speculation, but we know already know Trump would do this because he did it to former Attorney General Jeff Sessions. Trump repeatedly demanded that Sessions withdraw his recusal from the Russia investigation and take control of the probe, hoping the attorney general would protect him. The Mueller report documented this, indicating it fit the elements of the crime of obstructing justice.

Though there’s been much speculation, there’s no hard evidence that Trump has any links to Epstein’s crimes, though his public comments suggest he may have been aware of his conduct. So it’s far too big a leap to assume that Trump wants to gain control of the Epstein case to protect himself. But there’s another possibility suggested by public reporting that should be just as disturbing.

A Vanity Fair report by journalist Emily Jane Fox revealed Tuesday that Trump foresaw using Bill Clinton’s ties to Epstein against Hillary Clinton during the 2016 campaign. It didn’t end up becoming a major issue in the campaign, but it’s possible he’s interested now in using the new charges against Epstein as a weapon against Clinton.

Once again, all this would be wild speculation — except for the fact that Trump has done it before. One of the largely overlooked revelations in the Mueller report was that Trump directed Sessions to unrecuse not only from the Russia investigation but from cases involving Hillary Clinton because he wanted to see her prosecuted.

These facts emphasize one key point: We can’t trust Trump to fairly oversee the administration of justice.

But the larger problem is, of course, that we know that Trump has obstructed justice before — and yet he goes unpunished. House Judiciary Chairman Jerry Nadler hasn’t opened an impeachment inquiry. House Speaker Nancy Pelosi has resisted calls for impeachment. The Senate has made clear it would refuse to convict Trump if he were impeached, and Republicans have convinced themselves and their voters that the president’s behavior had been legal and acceptable.

That’s why impeachment in the face of clear violations is necessary. By refusing to impeach, lawmakers essentially condone criminality and abuses of power.

Trump has already gotten away with obstructing justice and trying to target his political enemies. Now that an old friend — or enemy, or whatever Epstein turns out to be — is in the Justice Department’s firing line, there’s no reason to think Trump wouldn’t do it again.

And there’s no reason to think Barr wouldn’t let him.