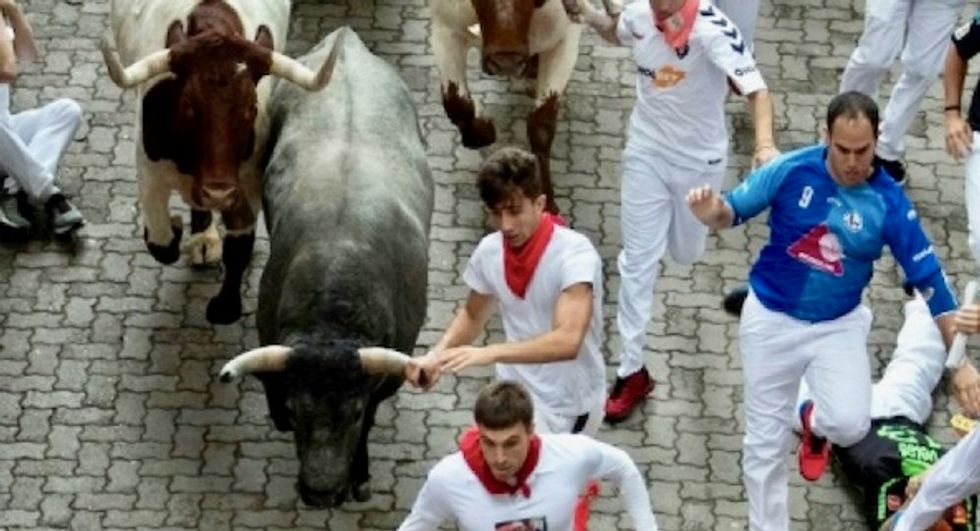 Participants run next to fighting bulls on the third bullrun of the San Fermin festival in Pamplona, northern Spain AFP

Half-tonne fighting bulls knocked over thrill-seekers Tuesday in a fast, adrenaline-fuelled chase through the winding streets of Pamplona in northern Spain that sent an American and a Briton to hospital.

There were no gorings but a 49-year-old British man fractured his ankle, requiring surgery, and a 42-year-old man from Chicago suffered a head injury in a fall although he was expected to be discharged from hospital later on Tuesday, regional health officials said.

Six bulls and six steers that keep the herd together, charged through the narrow, cobbled streets of the city, clearing a path through a sea of hundreds of runners mostly dressed in white with red handkerchiefs around their necks in the third bull run of the famed San Fermin festival.

The bulls from the Jose Escolar Gil ranch in the central province of Avila completed the 848.6-metre (928-yard) course from a holding pen to the city bull ring in two minutes and 13 seconds, the fastest run so far this year. They were to be killed in bullfights later Tuesday.

Some people sought safety by crowding close to the walls of the winding route but others dared to touch the rear of the bulls or to race a few steps in front of the sharp horns.

Two Americans and a Spaniard were on Sunday gored in the first run, which is usually the most crowded of the festival. All three remain in hospital.

People from around the world flock to the city of 200,000 residents to test their bravery and enjoy the festival?s mix of round-the-clock parties, religious processions and concerts.

Sixteen people have been killed in the bull runs since records started in 1911.

The most recent death took place in 2009 when a bull gored a 27-year-old Spaniard in the neck, heart and lungs.

The nine-day fiesta, which dates back to medieval times and was immortalised in Nobel Prize-winning author Ernest Hemingway?s 1926 novel "The Sun Also Rises", ends on July 14.