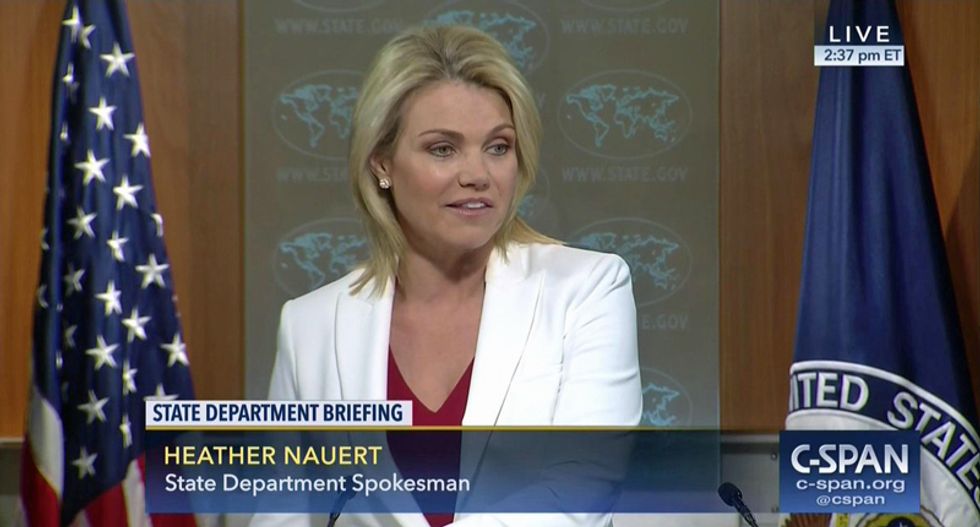 Correction: Heather Nauert strongly disputed the claims by Citizens for Responsibility and Ethics in Washington, which later removed the report from their website.

This is false.I NEVER received salary from 21st Century Fox while employed by State Dept.This story is based on a p… https://t.co/GlhD3BS5A0
— heather nauert (@heather nauert) 1562185365.0

Here is Raw Story's original report, based on the erroneous interpretation by CREW:

Former Fox News anchor Heather Nauert was paid by the network while serving as a top spokesperson for Trump administration.

The revelations were made in a financial disclosure form obtained by the good-government group Citizens for Responsibility and Ethics in Washington (CREW).

"She reported receiving $167,000 from 21st Century Fox, which she characterized as “Salary,” in Part 2 of her termination report. Part 2 covered the period from January 1, 2018, eight months after she entered government, to March 31, 2019, the date she left the State Department," CREW reported.

There may be ethical issues with the arrangement.

"If Nauert’s termination financial disclosure report is correct, the salary payments are problematic because the White House gave her an ethics waiver that authorized her to meet, interview, and communicate with 21st Century Fox employees," CREW explained. "The Counsel to the President explained that the basis for the waiver included a finding that she did not have a “continuing relationship with” or “financial interest in” the company."

"Nauert’s receipt of salary from the media giant would, however, have constituted a continuing financial relationship with and 'financial interest in' the company. Her disclosure as it currently reads suggests that she was representing the government in meetings with 21st Century Fox while continuing to receive a salary from the company," CREW noted.

"It is unclear why 21st Century Fox would have paid Nauert a salary months after she left the network and entered government," CREW explained. "If 21st Century Fox continued to pay the salary of one of its former employees while they worked in government, it only heightens existing concerns about Fox’s relationship with and influence on the Trump Administration."