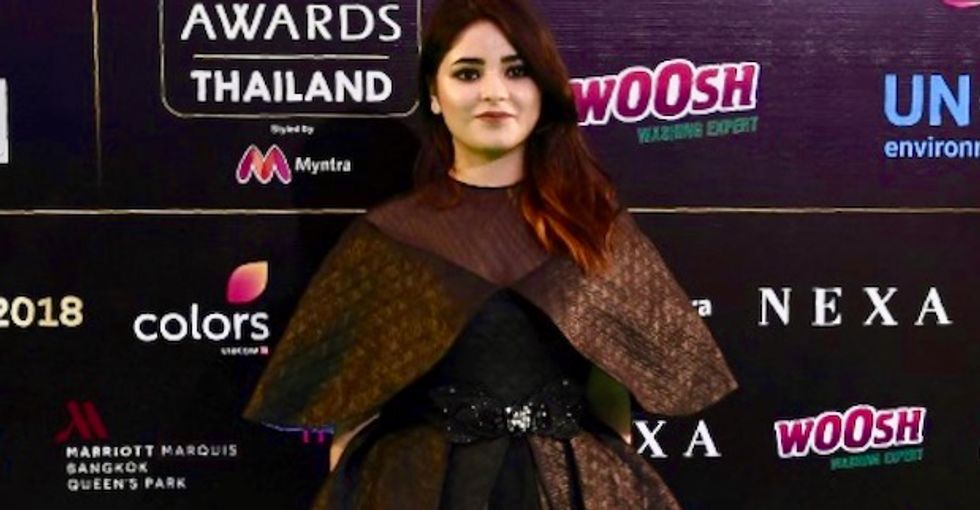 Zaira Wasim, who shot to fame in the hit 2016 movie "Dangal", said becoming a Bollywood star had 'damaged' her relationship with God AFP/File

A Bollywood actress who starred in India's highest-grossing movie said she is quitting acting because it is incompatible with her Islamic faith, sparking a social media storm.

In a lengthy social media post published Sunday, Zaira Wasim said she was leaving the profession because becoming a Bollywood star had "damaged" her relationship with God.

The 18-year-old won major awards for her two film roles to date and was considered a rising star of Indian cinema.

"This field indeed brought a lot of love... my way, but what it also did was to lead me to a path of ignorance, as I silently and unconsciously transitioned out of imaan (faith)," she wrote on Instagram.

"While I continued to work in an environment that consistently interferes with my imaan, my relationship with my religion was threatened," she added.

Wasim, from the restive Indian-administered area of Kashmir, shot to fame in 2016 when she starred alongside Bollywood icon Aamir Khan in the hit movie "Dangal".

She won a National Film Award for her role as an aspiring female wrestler, and the film went on to become India's highest-grossing movie. It also enjoyed massive success in China.

Wasim followed that up with a Filmfare Critics Award for her outing in 2017's "Secret Superstar", in which she played a young, Muslim singer-songwriter who becomes a YouTube sensation.

Bollywood has a long tradition of Muslim movie stars -- the three Khans: Aamir, Salman and Shah Rukh have dominated box offices for the last three decades.

There are far fewer Muslim actresses however -- in particular from the divided Kashmir region -- and some social media users took to Twitter to criticise Wasim for invoking Islam as her reason for stepping away from acting.

"Exit is your choice, reason, by all means. Just do not demean it for everyone else. The industry where all work shoulder to shoulder, no differences, caste, religion or where you come from," wrote actress Raveena Tandon.

Jammu and Kashmir police officer Imtiyaz Hussain said he respected her decision, but added that she "can't invoke religion and faith" to justify it.

"Are others in the field some kind of sinners? This dawning of new reality should be her own truth & her own interpretation of religion. Period," he wrote.

Others rallied to her defense.

"It's her life to do with as she pleases. All I will do is wish her well & hope that whatever she does makes her happy," tweeted former Jammu and Kashmir chief minister Omar Abdullah.

Wasim's last film will be "The Sky is Pink", due out in October, where she will be seen alongside Priyanka Chopra Jonas.

The filmmakers said in a statement that Wasim had been "a complete professional" throughout the shooting of the movie, which finished in June.

"This is a purely personal decision, which she has taken after much thought and we will be supportive of her in every way - now and always," they said.