Daughter of segregationist George Wallace: 'Never seen anything' like Trump -- not even my father 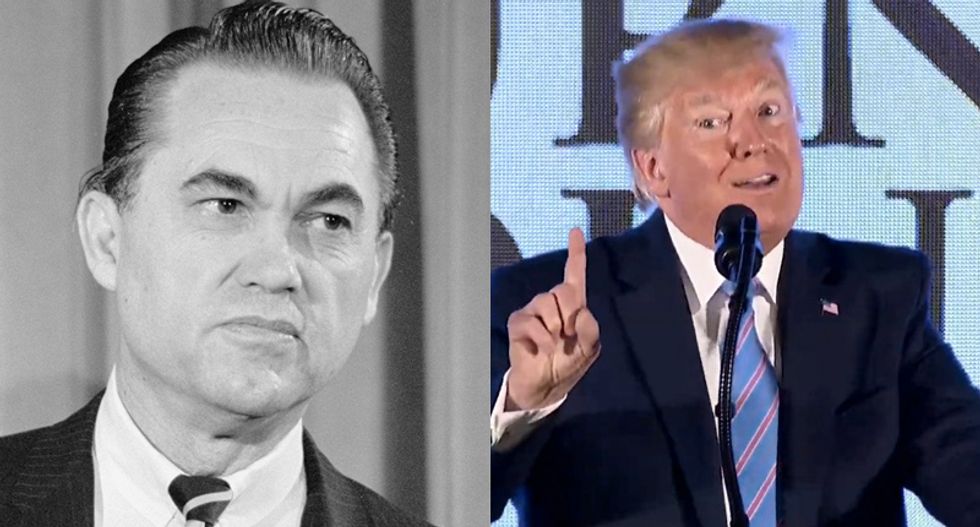 Peggy Wallace Kennedy, the daughter of segregationist Alabama Gov. George Wallace, now says that President Donald Trump's overt racism is even worse than what her father used to do when he ran for president in 1968 and 1972.

AL.com reports that Wallace recently gave a talk to a group of teachers at the Birmingham Public Library in which she expounded upon similarities between her father's campaign and the campaign run by Trump.

Even though Wallace was a staunch supporter of segregation in the South, by 1968 he had shifted gears to talk more about issues such as forced busing and states' rights that were not as overtly racist. Nonetheless, Wallace's angry campaign speeches attracted a fervent and ferocious following much like Trump's campaign rallies.

“The two greatest motivators at (Dad’s) rallies were fear and hate,” she explained. “There was no policy solution, just white middle-class anger.”

However, she believes that the rage shown at Trump's campaign rallies -- including chants to "send back" Rep. Ilhan Omar (D-MN) -- are worse than what she witnessed as a child on the campaign trail with her father.