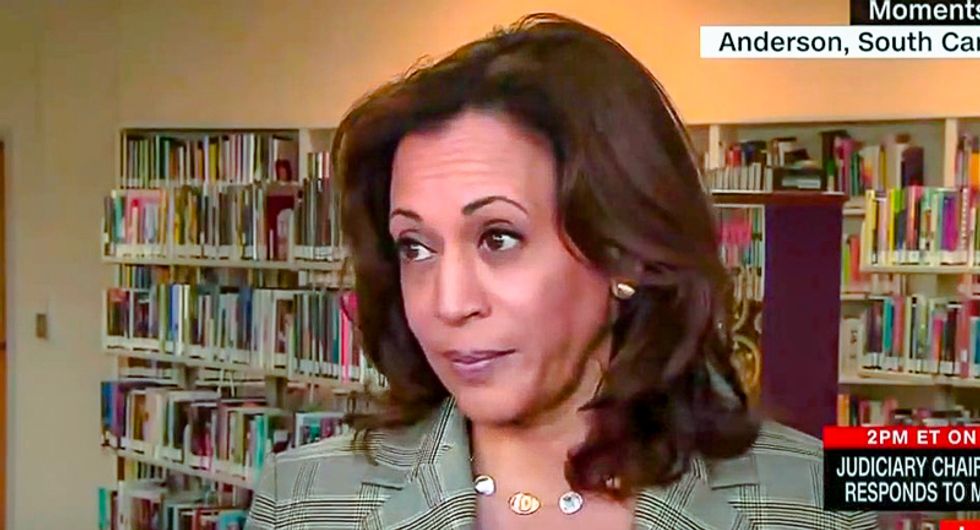 If a new president takes over the White House in January 2021, he or she may quickly find that the Democratic Party that just won control of the executive branch left a loaded gun in the hands of the Republicans, who are all too eager to use it.

That should be the takeaway from reports about the budget negotiations between the House Democrats and the Trump administration. According to Bloomberg reporter Sahil Kapur, the parties are coalescing around an agreement to raise spending by $350 billion, offset that increase somewhat with about $75 billion, and extend the debt ceiling — now set to expire in the fall — to July 31, 2021.

So assuming a President Biden or President Warren or President Harris has been inaugurated in that year, he or she will be forced into negotiating over the debt ceiling once again as one of the first priorities of a new administration.

As legal analyst Luppe Luppen put it on Twitter, the potential deal would just be "setting a straight up time bomb for the next administration."

Given the tenor of political debate in Washington D.C., a new Democratic president can't expect to have much of a honeymoon period of high approval ratings and a relatively generous opposition party. If Trump goes down in the 2020 election, it will inevitably be the result of a bruising, tendentious political battle that will leave both sides fuming. Republicans will be looking to drive a hard bargain on every piece of legislation from the start, and the debt ceiling would give them the ultimate leverage.

In a more rational and reasonable world, of course, it wouldn't. But that's because there isn't any need for having a debt ceiling in place at all. It prevents the federal government from borrowing money to cover expenses it has already agreed to pay once the national debt reaches and arbitrarily set limit. Breaching the debt limit would thus put the country in a legally untenable position and potentially trigger an economic catastrophe for no good reason.

Normally, this wouldn't be much of a problem, because both parties would see that it's in their and the country's interest to avoid this crisis, and the debt limit could be easily lifted. But the Republican Party has completely lost all sense of reason and decency, as is plain to anyone paying attention, and it has already made clear under President Barack Obama that it's willing to dabble in political brinksmanship with the wellbeing of the country at stake. At least, it's willing to do this when a Democratic president is in place to take the blame.

In 2014, a majority of Senate Republicans — led by Sen. Ted Cruz (R-TX) — fought Obama's effort to raise the debt ceiling. And in 2013, Cruz, too, led efforts that triggered a federal government shutdown in a failed attempt to thwart Obamacare. Even as president, Trump led the party in early 2019 to a disastrous month-long government shutdown in an effort to use the crisis as leverage to get Democratic support for his border wall. While government shutdowns aren't as perilous as a debt ceiling breach, the fact that GOP has been willing to play these sorts of games shows just how dangerous it has become.

And that means that the risk in extending the debt ceiling to July of the next presidential term is asymmetric for Democrats and Republicans. If Democrats gain control of the White House, you can be pretty sure the GOP will try to use debt ceiling negotiations to punish the victorious party. But if Trump wins a second term, Democrats won't be nearly as inclined to actually risk economic catastrophe to hurt the GOP.

So what should Democrats do instead of this two-year extension? They should seek to abolish the debt ceiling entirely, not simply extend it. As I said, there's no reason for a debt ceiling to exist at all. It doesn't control spending, it only threatens to trigger catastrophe if lawmakers decide not to fund the spending that they've already approved. The only function of having a debt ceiling is that it sets up these kinds of high-stakes standoffs. It makes much more sense for the government to simply be allowed to borrow however much money it needs to cover the spending that has already been approved by Congress.

Democrats should insist that this principle become the law of the land and not continue to let themselves be hamstrung by a radically dangerous GOP.