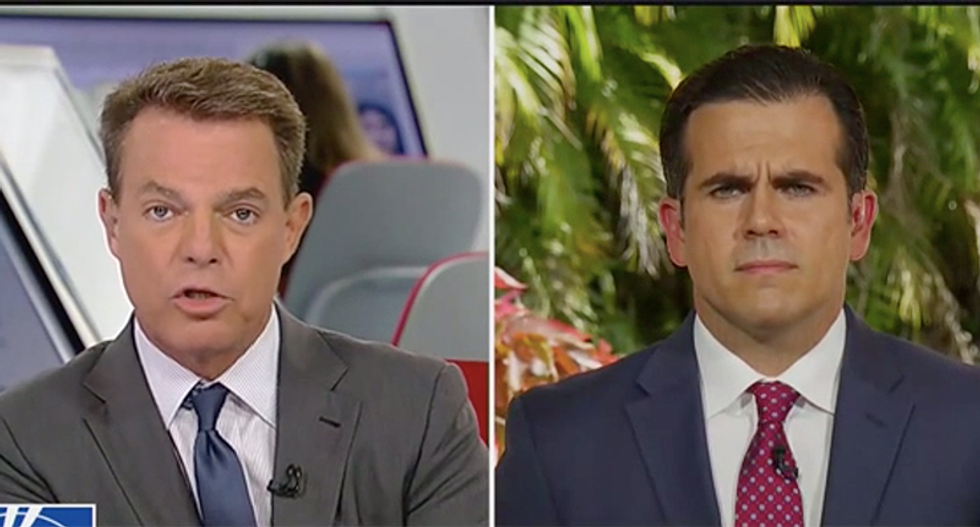 Puerto Rico Governor Ricardo Rosselló was outed for cold and heartless comments he exchanged about his own island in wake of the horrific hurricanes that destroyed the island in 2017. He's also being forced to ask questions about the corruption involving the funding for hurricane relief. Nearly 1 million people have taken to the streets demanding accountability and action.

In his first interview, Rosselló may have assumed he'd meet a friendly audience on Fox News, but Shep Smith let him have it.

"The corruption is rampant in Puerto Rico," Smith said. "Economically Puerto Rico is in a fiscal crisis, $70 billion in debt and a 13-year recession. In the leaked 900 pages of profanity-laced messages, dubbed RickyGate, after you, sir, you made light of the casualties of the Hurricane Maria, you tossed homophobic and misogynistic remarks, You were calling the former City Council Speaker Melissa Mark-Viverit a whore. Of the oversight board that rules Puerto Rico's finances, you said, 'Go F-yourself. And when your representative to that board said he is salivating to shoot the woman who is the mayor of San Juan, you said, 'You’d be doing me a grand favor.' So, attacks on woman, gays, dead relatives on your own island and after that who is left to support you? Is it even safe for you to govern?"

Rosselló reiterated that he'd apologized for the comments he was caught making behind closed doors and said that he is working to make amends. Smith noted that the five people he was talking to have been pushed out of the government, yet somehow Rosselló remains.

"Doesn't the buck stop with your office, governor?" Smith asked.

"That's right, but I was elected by the people of Puerto Rico," Rosselló tried to say before Smith cut in again.

"And those people around the streets saying we want you out," Smith retorted. "That’s a headline in the main newspaper. And the politicians on both sides of the aisle are saying the exact same thing. You're a man on your own island by yourself. How long can you stay there?"

He said that he intends to fulfill his obligations in office for the people. He then referenced the people who are still supporting him, which Smith called out, asking for specifics. Rosselló couldn't answer.

"I haven’t heard of that there's disappointment," Smith countered. "I’ve heard Puerto Rican after Puerto Rican watching multiple satellite feeds and speaking with our people who are on the ground in Puerto Rico and listening to journalists. I have not heard the word disappointments. I’ve heard numerous Purto Ricans say that you have disrespected them and not lead them properly, that you made fun of them, made light of them, that they no longer trust you and your leadership. For example, You had 660,000 votes to be governor of Puerto Rico, by all estimates, there are more people on the streets right now demanding you step down."

Rosselló tried to make "reasonable" proposals, but it wasn't enough for Smith.

"You are eliminating the past few weeks and the last ten days of demonstrations and the widespread calls and all that you have said, you said, 'I apologized for my mistakes,'" Smith quoted Rosselló. "That is how you have called them repeatedly. That’s what you call them at a news conference. Mistakes are things you do, that you didn’t mean to do or that you did by accident or an error and then you go back and you correct them. But 900 pages of attacks on people of your own islands are arguably not mistakes, they are a pattern and when you look at that pattern if that were some other politician other than you, what would you say about that person? Would you want that person leading you after all you said?"

Smith went on to ask if he'd apologized to all of the people he's attacked, including pop star Ricky Martin, and those survivors he insulted.

"Have you asked for forgiveness?" Smith also asked. "Because the looks of your streets -- that would suggest the people don’t believe you have. Ten days in a row. Have you apologized sufficiently? What will end these demonstrations as long as you are still in office?"

Rosselló said he "has apologized to some of them."

"Those of us who live back here stateside have watched the horrors that have ravished your islands and many of us -- I know I have -- we have looked and have wept for your people," Smith said. "To see all that your people that have gone through with the difficulty in getting everything fixed. The months and months without power and water and the devastation of the tourism economy. Seeing all that really made us very sad and [we] wanted to help in some way. I know a lot of people here have donated. Do you love Puerto Rico?"

He swore that he did.

Watch the governor go down in flames below: