Everything is [not] fine: Half-submerged Trump head designed to silence destructive words and deeds of US president, says artist 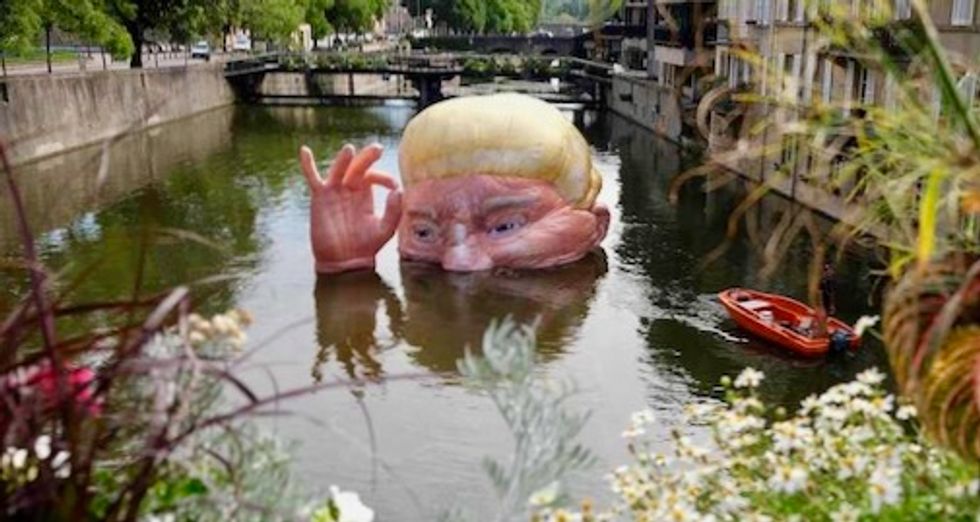 A picture taken on July 5, 2019 shows the installation "Everything is fine" depicting the half submerged head of US President Donald Trump by Jacques Rival, architect, displayed in the Moselle river as part of the digital art festival "Constellations de Metz" in Metz, eastern France. (Photo by Jean-Christophe Verhaegen/AFP/Getty Images)

"The idea was to gag Trump, to silence him, but he continues to speak."

An art installation that includes President Donald Trump's head half submerged in a French river, according to the artist behind the project, is designed to help remind people of the U.S. president's ongoing threat to the world.

The installation, titled "Everything Is Fine," is a project of artist Jacques Rival and also features a large inflated Trump head and hand held up in the "OK" finger sign as a garbled version of a recording of the president's 2017 speech announcing the U.S. withdrawal from the Paris Climate accord plays. The installation, which will be publicly viewable until September 7 as part of city-wide festival, will be lit up at night, Rival told AFP.

The public can press on a buzzer located on a platform near the Pont des Roches bridge that will either start or stop the speech.

The intent of the piece is to show that Trump will continue, obliviously, to talk even as the consequences of his behavior become impossible for the rest of the world to ignore.

"The idea was to gag Trump, to silence him, but he continues to speak, very sure of himself," Rival told AFP.

The work is "also a modest message sent to President Trump to tell him how his positions and his anti-ecological stances are dangerous for the whole world," said Hacène Lekadir, deputy director of culture for the city of Metz.

Rival's piece is part of the Constellations de Metz digital arts festival, which runs from June 20 to September 7.