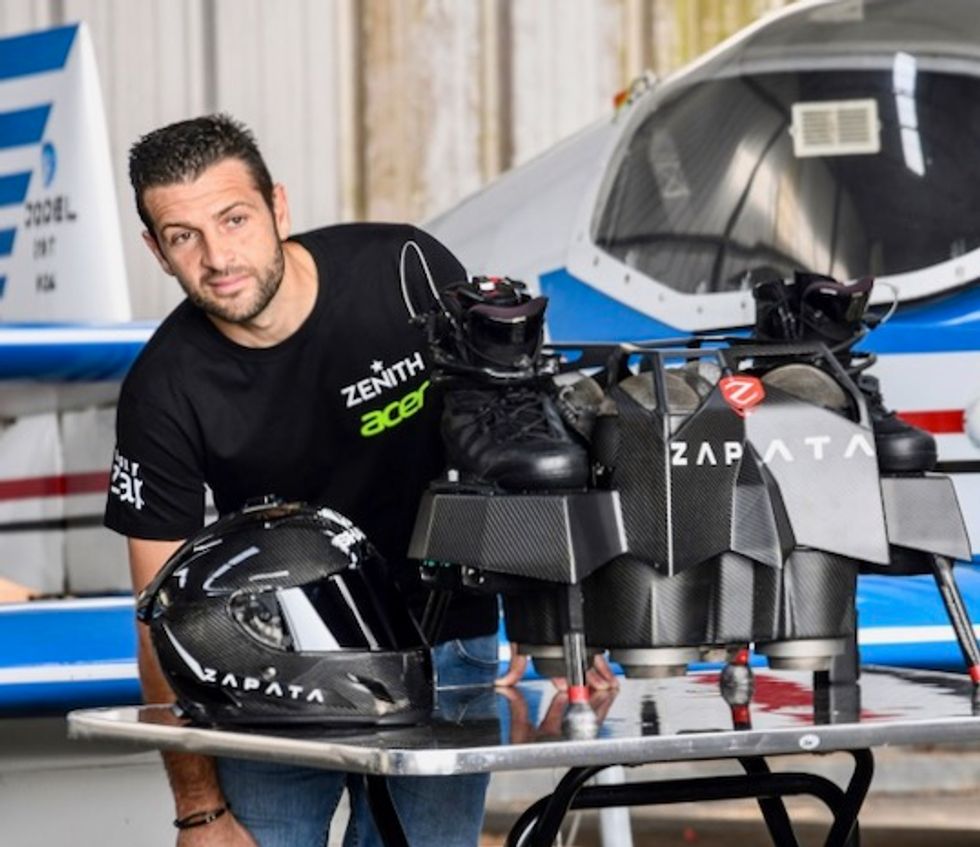 A daredevil French inventor Thursday crashed into the sea on an attempt to fly across the Channel standing on a jet-powered "flyboard", wrecking for now his dream of becoming a new aviation pioneer.

Franky Zapata, 40, a former jet-skiing champion, had to be fished out of the Channel by rescuers after falling into the clogged shipping lane between France and Britain during a tricky refuelling manouevre.

But he was in good health and would soon try again, his entourage said.

Zapata took off successfully from Sangatte in northern France and had planned to land in Britain around Dover after a flight of just 20 minutes.

But the refuelling was always set to be one of the trickiest parts of the operation and Zapata made contact with the refuelling platform due to the waves, forcing him into the sea.

AFP / Denis Charlet Zapata zoomed into the sky to begin his attempt wearing a full body suit, helmet and clutching a joystick to control the device

"There was a problem with the refuelling," a spokesman for his team said. "He could not carry out the procedure and so the crossing has been cancelled."

The mayor of Sangatte, Guy Allemand, said that Zapata was fine and being brought back to the French coast.

"He was recused by the boat's divers. It was a question of just a few metres" between the refuelling manoeuvre coming off and not working, he told AFP.

"Franky is fine, I spoke to him my phone," said Zapata's wife Krystel, who carried out the final launch preparations.

"He is very disappointed but, in general, one failure won't stop him," she added, saying he could launch a new bid "perhaps very soon".

The flyboard is fuelled by kerosene stored in the rider's backpack.

Zapata carried 47 kilos (104 pounds) of it on Thursday. But as that would only take him part of the way across the Channel, he needed to pick up a new backpack in mid-Channel for the second half of the trip.

In a scene resembling a science fiction film, Zapata had zoomed into the sky to begin his attempt wearing a full body suit, helmet and clutching a joystick to control the device.

Onlookers in Sangatte gasped in astonishment as he soared high above the sea and rapidly became just a tiny speck on the horizon.

In a tribute to past aviation heroes, Zapata had picked the day that marks 110 years since pioneer Louis Bleriot made the first airplane flight across the Channel on July 25, 1909.

His plan hit problems initially as the French maritime authorities refused to give the project their blessing -- while stopping short of an outright ban -- due to busy shipping traffic in the Channel.

But the maritime authorities said they lifted their "unfavourable opinion" after receiving guarantees from Zapata about his refuelling plans and safety.

Zapata sprung to national prominence at the July 14 Bastille Day military parade when he soared above the Place de la Concorde in Paris in front of world leaders including President Emmanuel Macron and German Chancellor Angela Merkel.

He carried a rifle during that demonstration and the French defence ministry said it was studying how the flyboard could be used by its troops.

"We created a new way of flying. We don't use wings. You are like a bird, it is your body that is flying. It is a boyhood dream," he told reporters ahead of the Channel flight.

"We want to follow a little bit in the footsteps of the pioneers of aviation," he added.

Zapata's flyboard, which is about the size of a skateboard, is powered by five small jet engines that allow the rider to fly at speeds of 190 kilometres an hour (118 mph).