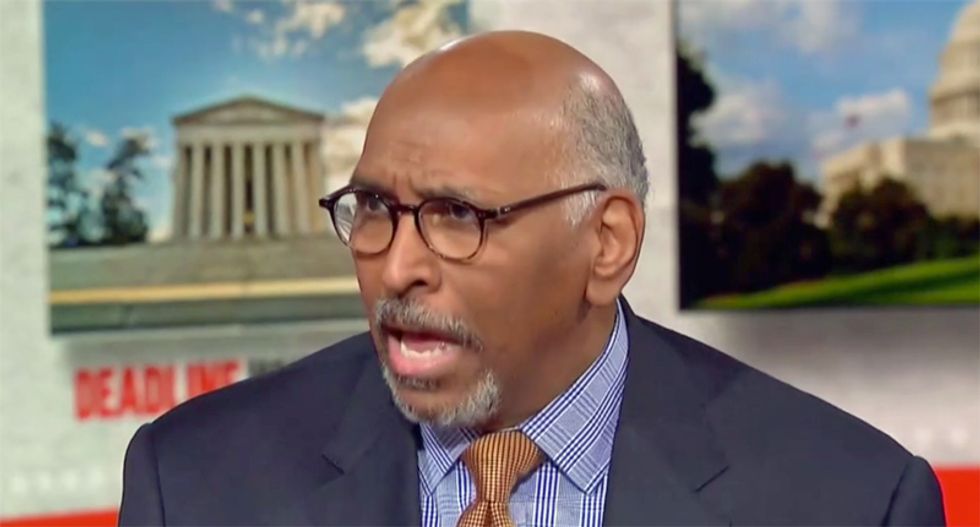 The former chair of the Republican National Committee ripped President Donald Trump's plan for a military show of strength on Independence Day.

Michael Steele, who was raised in Washington, DC, and was interviewed by MSNBC's Nicolle Wallace on "Deadline: White House."

"Okay, so the reason our roads in the city I grew up in aren’t built for tanks is we don’t roll tanks down Constitution Avenue or Pennsylvania Avenue or New York Avenue or any street in the city," Steele explained. "We are not a militarized zone."

"We have never had to prove our patriotism by rolling out planes and tanks. This is for the president’s own self-aggrandized amusement," he continued.

"He’s been feted by Kim Jong-un and others who have rolled out all of these military hardware to show their masculinity," he argued.

"And so as a native Washingtonian, I find it to be offensive," he continued. "And I just find this whole thing to be problematic, let alone just the personal grinding that it causes when I think about what this is really about and this is not saluting America. It’s saluting Trump."

MSNBC's Joy Reid said, "it’s always a threat when you roll out your military."

"But it’s to whom is the threat, and I suspect that the threat is to his fellow Americans," she explained. "And I hate to say that, but I think that Donald Trump styles himself a tyrant, not a defeater of tyrants."

Richard Stengel, the former Under Secretary of State for public diplomacy, reminded viewers why we celebrate Independence Day in America.

"But the thing is, the message, by the way, of July 4th is also against tyranny, right? These people pledged their lives, their fortunes, their sacred honor to rebel against a tyrant, to rebel against hereditary privilege, which he seems to embrace," Stengel explained.

"Except they wouldn’t fight," Reid said.