Fox & Friends is so excited about $2.13 an hour minimum wage jobs for tipped workers 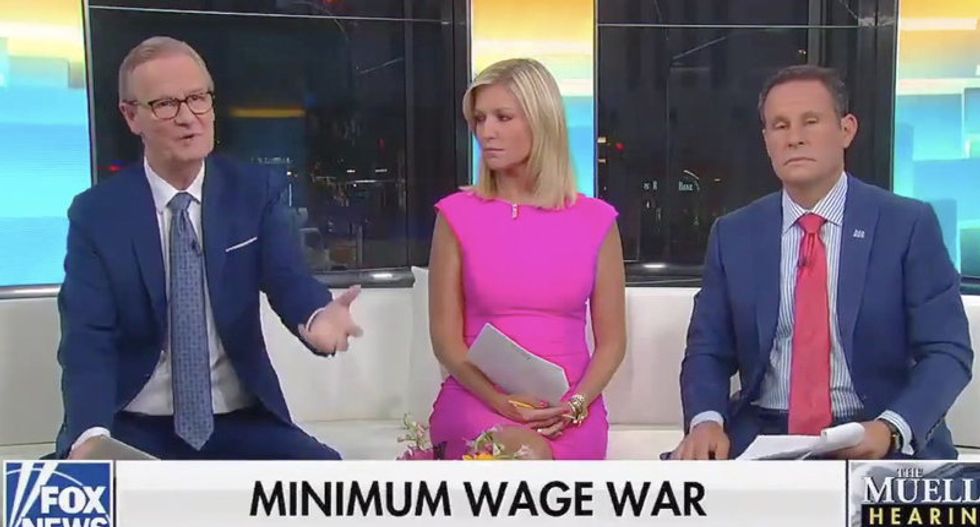 "Fox & Friends" Tuesday morning spent several minutes discussing minimum wage jobs for tipped workers. Co-host Brian Kilmeade boasted he had five to seven tipped minimum wage jobs when he was young, calling each "one of the best jobs you can have."

"I started as a bus boy, I used to  bus, clear the tables, and we used to rotate washing the dishes, and at the end of the day you pool your tips. It's one of the best jobs you can have when you're breaking in," Kilmeade insisted, because "you don't even expect that check. It's almost a surprise when you get a $60 or $70 check at the end of the week," in addition to tips.

$60 or $70 isn't even lunch money to people in Kilmeade's income bracket. He reportedly makes $4 million per year, and has a net worth of $8 million.

Later, host Steve Doocy tried to discredit Rep. Rashida Tlaib (D-MI) for saying the federal minimum wage should be even higher than the $15 per hour the House just passed – she says it should be "$18 to $20 an hour at this point."

But Doocy, who has a long and ugly history of attacking attempts to raise the minimum wage – including citing out-of-date studies to make his points – was forced to admit he was unaware of just how low minimum wage is for tipped employees, like restaurant workers.

"Currently, and I did not realize this, the federal minimum wage for tipped employees is $2.13 an hour," Doocy said Tuesday morning.

He quickly followed up with a report, gloating that presidential candidate Bernie Sanders will start to pay campaign employees $15 an hour, "but he's going to have to cut back their hours, because they can't afford it."