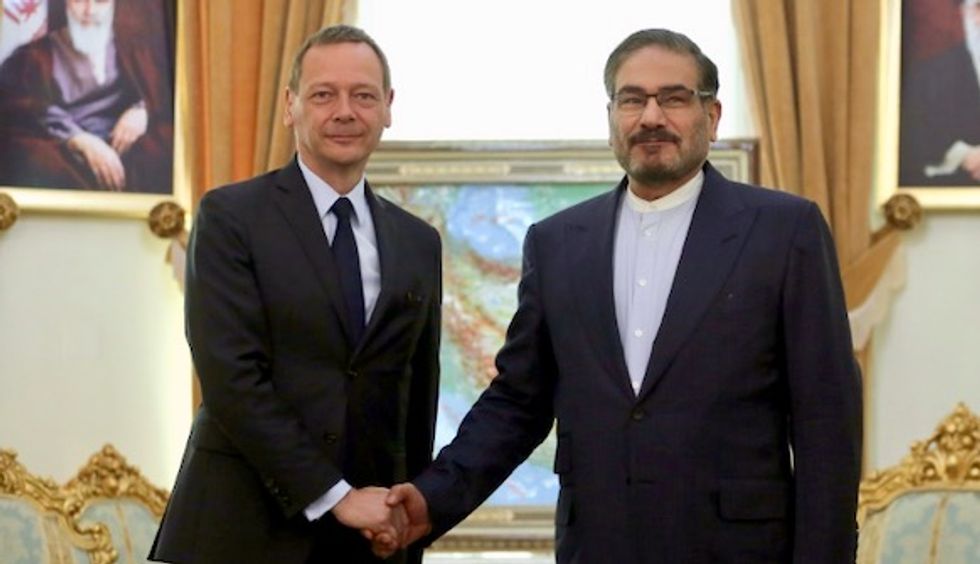 A diplomatic adviser to French President Emmanuel Macron held talks in Tehran Wednesday aimed at saving the 2015 nuclear deal and easing tensions between Iran and the United States.

Bonnes' mission is "to try and open the discussion space to avoid an uncontrolled escalation, or even an accident," according to French Foreign Minister Jean-Yves Le Drian.

The accord between Iran and world powers, the Joint Comprehensive Plan of Action (JCPOA), promised sanctions relief, economic benefits and an end to international isolation in return for stringent curbs on the Islamic Republic's nuclear programme.

But Tehran says it has lost patience with perceived inaction by European countries more than a year after President Donald Trump unilaterally pulled the United States out of the agreement.

The European parties to the deal along with the EU's diplomatic chief on Tuesday called on Tehran to reverse breaches of the agreement.

Iran "must act accordingly by... returning to full JCPOA compliance without delay," said a statement from the European Union and foreign ministers of France, Germany and Britain.

Iran until recently consistently lived up to its commitments under the deal, but is now in breach of two aspects, according to the International Atomic Energy Agency (IAEA), which is tasked with inspections.

Bonne arrived in Tehran after Iran announced on Monday it had surpassed 4.5 percent uranium enrichment -- above the 3.67 percent limit under the agreement, though still far below the 90 percent necessary for military purposes.

The IAEA said on Monday that Iran has exceeded the purification cap, having earlier this month confirmed it had surpassed 300 kilogrammes of enriched uranium reserves, another limit that was imposed by the deal.

But in an apparent effort to boost France's diplomatic efforts, Le Drian described these breaches as "slight excesses."

A source at the French presidency said "we are in a very critical phase. The Iranians are taking measures that are in violation (of the agreement) but (they) are very calibrated."

"Donald Trump is a dealmaker," this source added. "The Iranians exaggerate, but not too much, and Trump is exerting maximum pressure but he is doing this so that he can get a deal."

After Washington withdrew from the JCPOA in May 2018, it reimposed stinging sanctions on Tehran, hitting the banking and oil sectors hard.

As the Iranian economy went into free fall, Iran demanded that the other parties to the deal -- especially France, Germany and Britain -- deliver promised economic benefits and help it bypass the US sanctions.

However, it became clear that this was no simple task, and Iran -- whose economy depends heavily on oil exports -- changed tack and indicated it would reshape its policy of "strategic patience".

In May, a year after Trump's withdrawal, President Hassan Rouhani said that Iran would roll back its commitments under the deal in stages every 60 days in an effort to force the other parties to deliver on their side of the bargain.

As tensions rose, the United States dispatched a naval carrier, bombers and extra troops to the region to counter perceived threats from Iran.

Last month Trump said he had called off a retaliatory military strike against Iran at the last minute after the Islamic republic shot down a US drone that it said had crossed into its airspace, a claim denied by Washington.

In reaction to Tehran's latest breach the US president on Tuesday said Iran is "doing a lot of bad things."

"They'd better be very careful," he told reporters at the White House.

But despite the heightened rhetoric between the US and Iran, Macron is pursuing his diplomatic track.

On Saturday he held an hour-long conversation with Rouhani in which he said he wanted to "explore the conditions for a resumption of dialogue between all parties".

The White House confirmed that Macron and Trump had discussed the standoff.

While pointblank refusing any talks with the Trump administration, Iran has been receptive to French diplomacy.

"We welcome their activities because the French are a part of the JCPOA and we consider their efforts as part of their duty" to keep the agreement alive, said foreign ministry spokesman Abbas Mousavi, quoted by the official IRNA news agency.