Funeral held for Italian officer allegedly stabbed by US teenagers 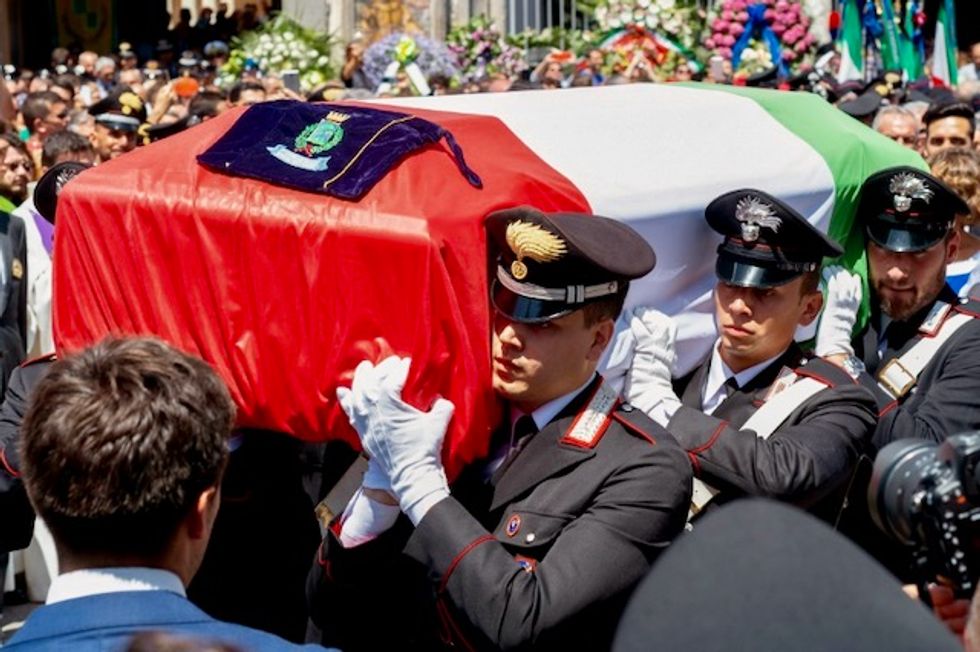 The casket, draped in the Italian flag, was carried by police pallbearers into the church AFP / Eliano IMPERATO

Hundreds of people gathered Monday for the funeral of an Italian police officer stabbed to death in an alleged confrontation with two American teenagers that has sent shockwaves through the country.

Grieving family, colleagues and friends filled a church in Somma Vesuviana, the hometown of officer Mario Rega Cerciello, 35, who suffered multiple knife wounds on Friday in an attack that the suspects claim was in response to a drug deal gone wrong.

Crowds applauded as the hearse bearing Cerciello's coffin arrived at the funeral near Naples, to the solemn tolling of church bells.

The casket, draped in the Italian flag, was carried by police pallbearers into the church as a military trumpet rang out.

A photograph of Cerciello and his wife were placed on the coffin, along with an AC Napoli football shirt.

The slain officer had recently returned from honeymoon. He was stabbed 11 times with a bayonet knife with an 18-centimetre blade, Italian media reported.

According to police, the suspects say they did not realise that Cerciello and his colleague were officers.

They thought they were friends of an alleged drug dealer from whom the pair had stolen a bag which was supposed to contain cocaine but turned out to be crushed aspirin, according to media reporters citing investigators.

The victim of the theft tipped off the police, but when two officers in plain clothes went to arrest the two American tourists, one of them allegedly pulled out a knife.

"We have remembered Mario in tears: all the lovely things, the moments spent together. But also the tragedy, a terrible affair which cannot go unpunished," the mayor of Somma Vesuviana, Salvatore Di Sarno, told journalists.

The US embassy to Italy tweeted its condolences and said it shared "the grief of (Cerciello's) family and the police".

The funeral comes amid controversy over a picture of the suspects blindfolded and handcuffed while under questioning.

Giandomenico Caiazza, head of a lawyer's union, said the treatment of the suspects might compromise the interrogation, which police say included a confession.

Neither of the suspects "have shown they have understood the seriousness of the consequences of their behaviour," Rome judge Chiara Gallo said in her order for the pair to be remanded in custody, according to media reports.

She said the teenagers from California showed "an immaturity excessive even for their young age".

The pair were being held at Rome's Regina Coeli prison.

Police said surveillance cameras helped them track down the pair to their four-star hotel where they arrested them. Their bags were packed and they had been planning to fly home the same evening.

Officers allegedly found a large knife hidden in the false ceiling of their hotel room.

"There is no doubt that the victim of this tragedy is Mario," Prime Minister Giuseppe Conte said on Facebook.

However, he said blindfolding suspects "does not comply with our principles and judicial values".