'Get over yourself': Tomi Lahren tells World Cup champ Megan Rapinoe she’s ‘not a hero’ and has ‘an attitude problem’ 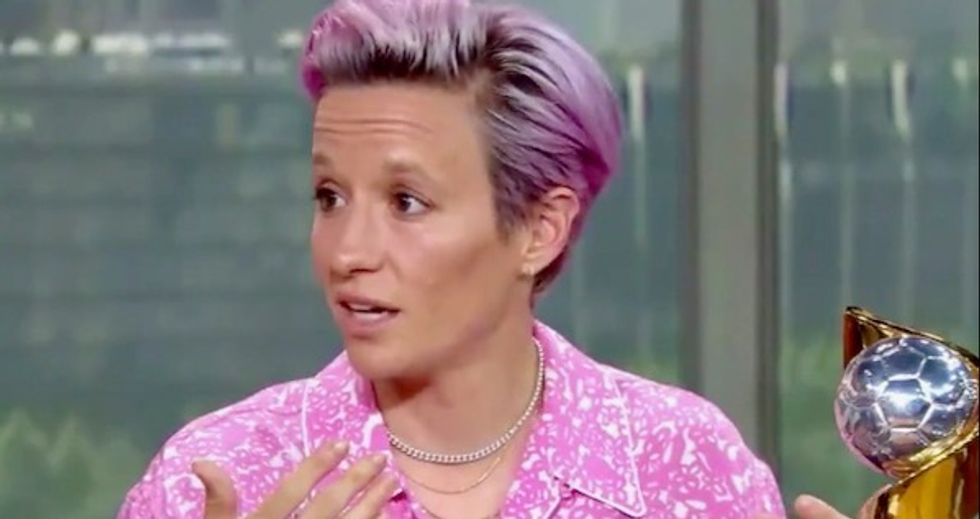 Fox News commentator Tomi Lahren went off on World Cup champion Megan Rapinoe, telling the National Women's Soccer League star Tuesday she has a "bad attitude," and is "not a hero." Lahren also appeared to blast the Olympic gold medal winner for saying she would not visit the White House if invited.

"You don’t have to like @realDonaldTrump but when you have a giant 'USA' on your back, you represent this country and ALL Americans," Lahren tweeted, to great mockery. She added that Rapinoe is "not a hero," but a "virtue-signaling soccer player with a chip on her shoulder and an attitude problem."

"Get over yourself," Lahren ordered.

Rapinoe, actually is aware of her responsibility to represent America, which may be why she said she would not attend a White House celebration, and called for wage equality after her win.

She also brushed off Trump's remarks, saying, I held up my end of the bargain."

But in a great example of how little Lahren is actually paying attention to issues, Rapinoe had already spoken about what Lahren was saying before she even tweeted, as she spoke in the video below.

"It's the game of course and we want to win," Rapinoe told Sports Illustrated. "But knowing the impact that we have already had and knowing the impact that we are going to have when we came home, the motivation of just that alone is incredible. I really feel like we do this for our group, for ourselves, for our team, for our staff, for our friends and family and for everyone. I think that we always want to try to bring more people into the conversation. We want to have the conversation, we want to open it up to everyone."

"I think obviously we are very lucky to wear the shirt and to represent America in a way that no team really does. We're very lucky we play all kinds of games all year long, and I think that we do an incredible job of representing every American."

Appearing on "CNN This Morning" to discuss receiving a Congressional Gold Medal -- the highest honor that can be bestowed by Congress -- Capitol police officer Harry Dunn laughed off Donald Trump's desire to "terminate" the U.S. Constitution and said he wasn't going to let him ruin his day.