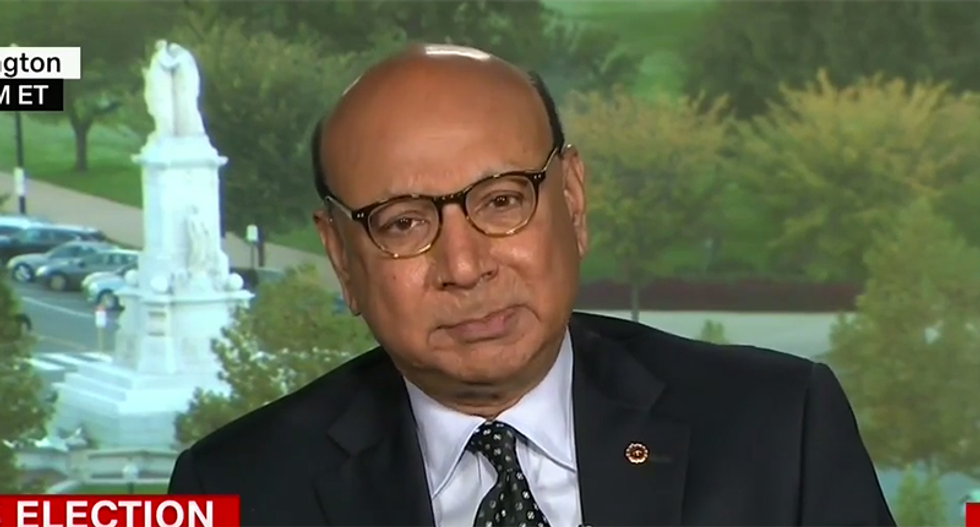 "This is a man without any shame," agreed Cooper. "He doesn't have a health care policy. He doesn't have — he's not able to make progress on immigration in any sort of policy that actually solves the problem long term. And so he does these things and it is largely in times to distract, but it's not just distracting people, it's distracting people in the worst possible, bigoted, divisive way. It's distracting us by turning us against each other and viewing each other as other."

"He sits in People's House as leader of this blessed nation, yet he has nothing to offer," said Khan. "He promised immigration reform, health care reform, and other claims he has made. He has made no progress because of his lack of leadership. Yet he continues to sow hate. This is a page from Putin's playbook. Our adversaries are very happy to see him act as enemy of United States."

"This is our blessed country. This is our blessed nation," said Khan. "This president, who has taken the oath to defend the Constitution of United States is assaulting, is attacking honorable member[s] of the Congress. The members of the House of Representatives, institution of Article I, he is supposed to defend and protect all of us, yet, he ... continues to attack and assault these honorable members of our Congress and the minorities."

"It's also — I mean, it's the most obvious sort of bumper sticker kind of slogan of like, America, love it or leave it that, you know, sort of Archie Bunker used to use," said Cooper. "It has almost become a joke because it is so simplified and essentially un-American to say that, 'You disagree with me, then you are un-American. You disagree with me, you should leave the country,' as opposed to, this is a land which welcomes debate and free expression."

"This is the proof of an authoritarian mentality, undemocratic mentality," said Khan. "Fortunately, America has discovered him. America has realized the mistake they made in 2016 ... next time, they are very much cognizant of the harm he continues to cause to our democratic institutions, our democracy of decency."

"This blessed nation is the same nation that started, after the Second World War when the world was totally destructed, started the Marshall Plan to construct the world," said Khan. "That is how world sees us, continues to see us, view us as beacon of hope and prosperity, and this president is contrary to that being beacon of hope."

"He will continue," added Khan. "It will get worse as he realizes his failures, as the election gets near he will continue to get worse. His hate speech is sowing division because he has nothing else to offer to this country, but this time the nation has fully realized that this is a fraud that was committed by Donald Trump. They will not fall second time for it."