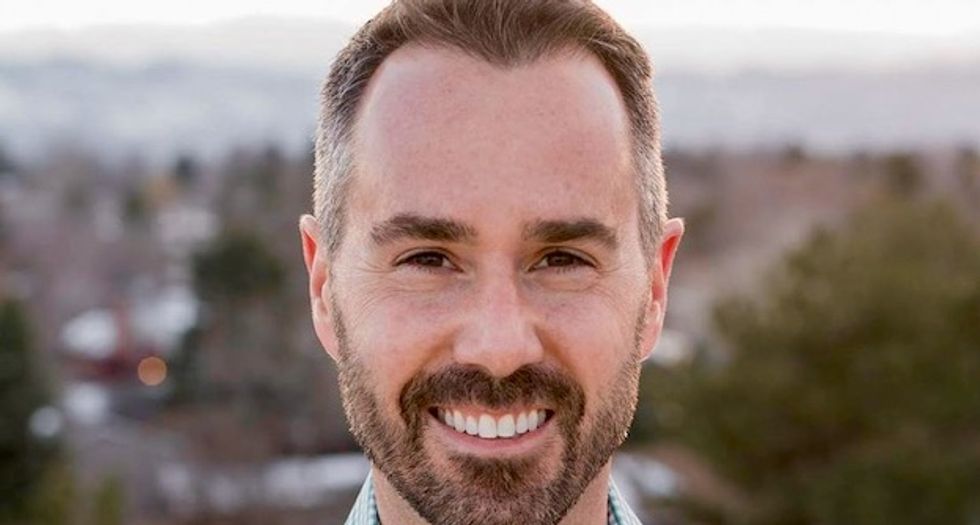 U.S. Senator Cory Gardner (R-CO) has no problem pretending to be pro-LGBT when he's at a fundraiser hosted by a conservative LGBT organization, but he can't hide his record from voters or from his challenger, a gay Democrat.

Dan Baer, a former U.S. Ambassador under President Barack Obama, announced in April he is running for the U.S. Senate, hoping to win the Democratic nomination and the Senate seat currently held by Gardner. As The Advocate reports, Baer "just received the endorsement of the LGBTQ Victory Fund," which works to help elect out LGBTQ candidates.

As the Colorado Times Recorder reported in May, Sen. Gardner "was one of three swing-state Republican senators to receive money from a fundraiser hosted by American Unity Fund (AUF), a conservative LGBT rights group."

Here he is posing with "AUF supporter Jay Timmons, president of the National Association of Manufacturers," who "posted a picture of Gardner and U.S. Sen. Susan Collins (R-Maine) posing with Timmons and his husband at the event."

Senator Gardner's anti-LGBT history is well-known. He has been rated extremely low (12% and 16%) by HRC.

Gardner has a troubling relationship with marriage equality. He has stated very publicly his opposition, but in his tough race against Democrat Tom Udall, the incumbent, Gardner massaged his position, saying it was a matter for the courts.

In June of 2014 HRC called Gardner's views on equality "incredibly antiquated," noting he "voted against allowing unmarried same-sex partners to adopt children and to prohibit sexual orientation discrimination." Gardner, HRC said, "is determined to discriminate against and exclude LGBT people."

Later that year, less than one month before he would be elected to the U.S. Senate, Gardner "issued a statement ... that he isn’t budging from his position that marriage should only be between a man and a woman but also emphasizing his respect for the law and for all couples," Colorado's Fox 31 reported.

“My views on marriage have long been clear,” Gardner told the Denver-based station. "I believe we must treat each other with dignity and respect. This issue is in the hands of the courts and we must honor their legal decisions."

His press secretary in that same article is quoted saying Gardener is "a strong supporter of marriage equality."

Marriage equality seems to be a marriage of convenience for Sen. Gardner.

Also expected to be released are 911 calls and home surveillance video. Lawyers for the suspect, David DePape, argued that the video should not be made public since it would “irreparably damage” his right to a fair trial. DePape has pleaded not guilty to a list of state and federal crimes, including assault and attempted murder.