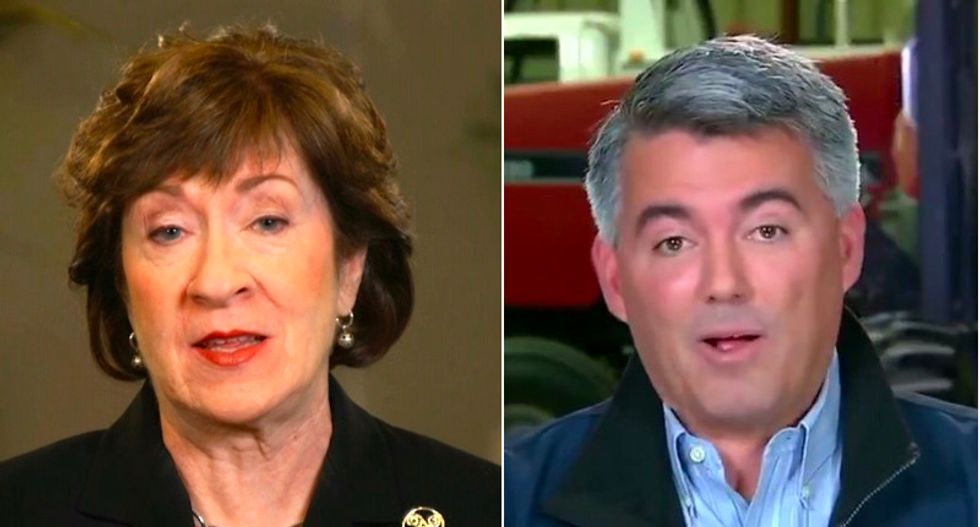 Election season typically brings both sides closer to the center as they work to appeal to the middle-majority and key independent voters. But when President Donald Trump attacked four American women of color in Congress, telling them to go back to their country of origin those same Republicans were nowhere to be found.

A lone Republican who has stepped down, Sen. Jeff Flake (R-AZ) attacked Trump on Twitter.

Texas Sen. John Cornyn ranted about Democrats and migrants on the border. Endangered Sen. Susan Collins's (R-ME) silence spoke volumes. Sen. Cindy Hyde-Smith (R-MS) cited a quote from The Bible telling her followers that God was with them. Given the large constituency of color in Sen. David Perdue's (R-GA) state, one would assume he would be quick to disavow Trump's racist statements. He too was silent. Sen. Cory Gardner (R-CO) represents a state that is turning more Democratic every day, yet he too was nowhere to be found. Sen. Ron Johnson (R-WI) was eager to tout his bipartisanship, yet he was silent.

Meanwhile, appointed Sen. Martha McSally (R-AZ) was too busy searching for a lost running shoe on Twitter. Sen. Joni Ernst (R-IA) hasn't been afraid to speak out against Trump in the past but for some reason she was Sunday. She chose instead to tweet about a patriotic shoe with stars.

During a panel discussion on CNN, Democratic strategist Karen Finney called out the GOP members asking them to take a stand.

"I want to hear from the Republican Party -- because if you disagree with President Trump, you need to speak out now," she said.

Indeed, if Republicans are searching for a way to set themselves apart from the far-right, this would be an excellent opportunity.

During the 2016 campaign, whenever Trump made racist or xenophobic comments there was a small but reliable chorus o… https://t.co/FkneJP20Jb
— Philip Rucker (@Philip Rucker) 1563140103.0