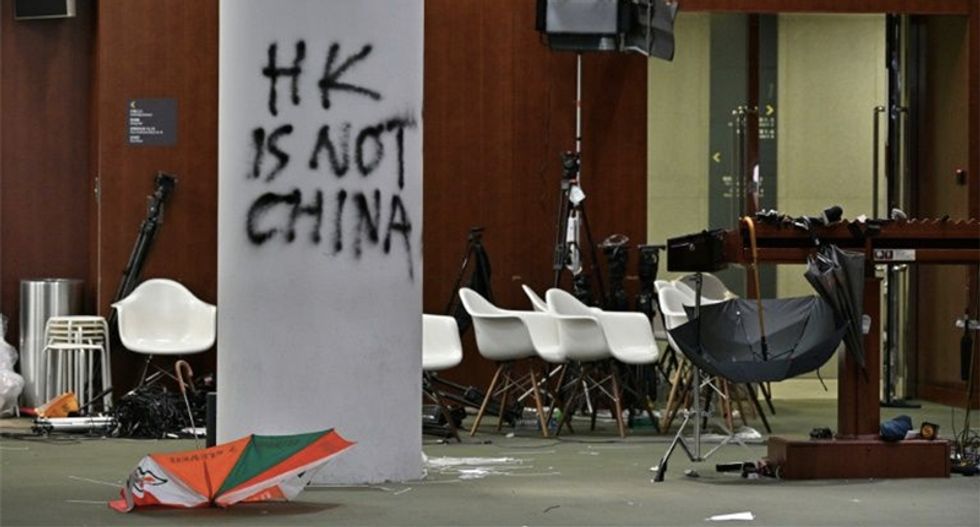 The protesters smashed their way into the former British colony's legislative building,prompting a diplomatic feud between Beijing and London. (AFP/Anthony WALLACE)

Five people were arrested during overnight clashes in Hong Kong between riot officers and anti-government protesters, police said Monday, as the political violence rocking the international hub shows no sign of abating.

The city has been plunged into its worst crisis in recent history following a month of huge marches as well as separate violent confrontations with police involving a minority of hardcore protesters.

The rallies were sparked by a now-suspended law that would have allowed extraditions to mainland China, but have since morphed into a wider movement calling for democratic reforms and a halt to sliding freedoms in the semi-autonomous territory.

Sunday night saw fresh political violence break out in the district of Mongkok as police baton-charged small groups of masked, largely young protesters who were walking along roads and refused to disperse following another massive, peaceful rally earlier in the day.

In a statement issued early Monday morning, police said the group were taking part in an "unlawful assembly" and had been warned that officers would take action.

Activists hit out at the police tactics, saying the protesters in Mongkok had remained peaceful as they made their way home and that violence was started by a shield wall of riot officers that had blocked the crowd's path.

"Just another example of excessive force used by the police," he added in another tweet.

Public anger has soared against the city's pro-Beijing leaders and its police force after officers used tear gas and rubber bullets to disperse protesters outside parliament last month.

Since then the chaos has only escalated. Last Monday, anger peaked as hundreds of youth-led demonstrators successfully stormed and trashed the city's parliament.

Those unprecedented scenes -- and renewed huge marches -- have failed to persuade the government, whose sole concession so far has been to suspend the loathed extradition bill.

Protesters are demanding the bill be scrapped entirely, an independent inquiry into police use of tear gas and rubber bullets, amnesty for those arrested, and for the city's unelected leader Carrie Lam to step down.

They have also demanded authorities stop characterising protesters as "rioters", a definition that carries much steeper jail terms.

Beijing has thrown its full support behind the embattled Lam, calling on Hong Kong police to pursue anyone involved in the parliament storming and other clashes.

Despite repeated requests, police have not released a breakdown of how many people have been detained in the last month of protests.

A tally kept by AFP shows at least 72 people have been arrested but it is not clear how many have been charged.

The Secret Service was tracking at least one neo-Nazi group and several individuals planning to violently occupy the U.S. Capitol to prevent the congressional certification of Donald Trump's election loss, according to newly revealed documents.

Agency emails obtained by Citizens for Responsibility and Ethics in Washington show the Secret Service received multiple tips from a "concerned citizen" who alerted them to two people, including one who had made threats against Joe Biden, were planning to attend Trump's "Stop the Steal" rally and "incite violence.

Blinken demands action on Putin at UN showdown on Ukraine

US Secretary of State Antony Blinken on Thursday demanded that President Vladimir Putin be held to account as he faced Russia in a Security Council session in which the United Nations catalogued abuses in Ukraine.

"The very international order we've gathered here to uphold is being shredded before our eyes," Blinken told the Security Council in a special session as leaders met at the United Nations.

'This is a deep state situation': Alex Jones testifies FBI is behind Sandy Hook lawsuit

Conspiracy theorist Alex Jones testified to a court on Thursday that he believes the "deep state" is behind a defamation lawsuit over the Sandy Hook shooting.

After taking the stand for the first time in Connecticut, Jones was asked about claims made on his website that the FBI orchestrated a lawsuit brought by an agent who responded to the Sandy Hook shooting.