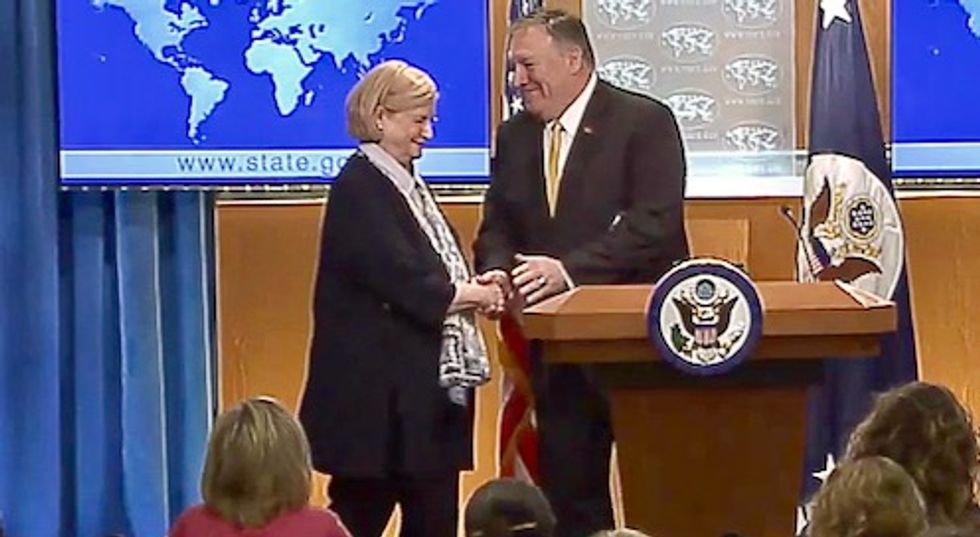 U.S. Secretary of State Mike Pompeo on Tuesday was sent letters signed by hundreds of human rights organizations, activists, and supporters, along with religious and political leaders demanding he abolish his newly-formed anti-LGBTQ and anti-women "Commission on Unalienable Rights."

Pompeo claimed it was an effort to "provide fresh thinking" about the government's role in the promotion and advocacy of "natural law and natural rights," which is right-wing code for anti-LGBTQ and anti-choice. The Secretary chose to head his nascent organization an anti-LGBTQ anti-choice activist, Mary Ann Glendon (photo above, with Pompeo at the launch of the commission.)

The letters sent to Pompeo "accuse the State Department of sidelining rights for women and the LGBTQ community in favor of religious liberty," NBC News reports.

One letter being sent Tuesday by more than 180 rights groups — including the American Civil Liberties Union, the Center for Disability Rights and the Anti-Defamation League — demands that the commission be abolished. The groups say the commission is being overseen by clergy and scholars “known for extreme positions opposing LGBTQI and reproductive rights," including some who they say have defended “indefensible human rights violations.”

One of the three letters calls on the Secretary to "immediately disband" his Commission on Unalienable Rights.

Another of the letters, this one from Catholic theologians, was signed by more than 110 people, and calls for the “immediate dismantling of this commission,” NBC News says adding that the "letter adds concern that the commission will be used to downplay the needs of the poor, immigrants and refugees."

One of the letters, organized by Human Rights First is respectful but scathing. It begins:

We, the undersigned U.S. foreign policy, human rights, civil liberties, social justice, and faith leaders, experts, scholars, and organizations, write to express our deep concern with the Department of State’s recently announced Commission on Unalienable Rights. We object to the Commission’s stated purpose, which we find harmful to the global effort to protect the rights of all people and a waste of resources; the Commission’s make-up, which lacks ideological diversity and appears to reflect a clear interest in limiting human rights, including the rights of women and LGBTQI individuals; and the process by which the Commission came into being and is being administered, which has sidelined human rights experts in the State Department’s own Bureau of Democracy, Human Rights, and Labor (DRL).